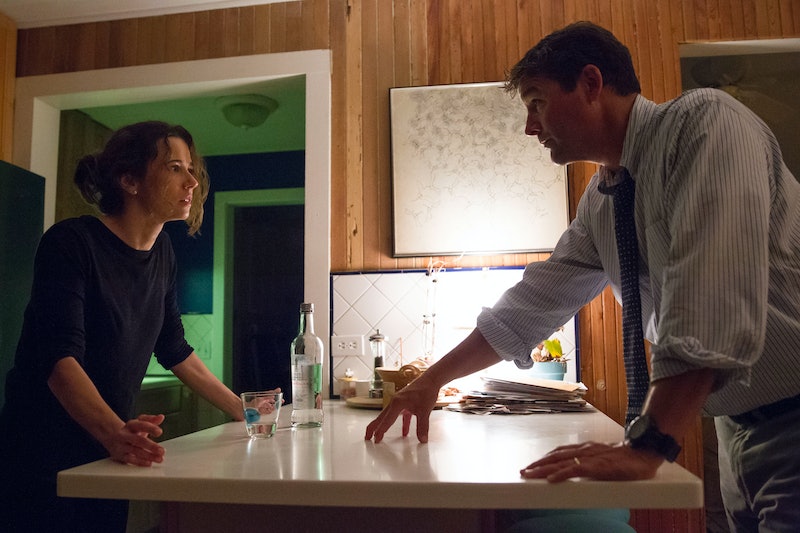 If there's one thing John Rayburn made clear during the Bloodline Season 2 finale, it's that he's sick and tired of always being the responsible sibling. After Kevin and Meg essentially told him that the blame for Danny's murder rests solely on his shoulders and they're willing to turn on him if necessary, he flew off the handle about how he's always been the one to "fix" all three of his siblings' problems — and, at this point, he seemingly implied that he did everyone a favor by offing Danny. And, apparently, he really meant it when he said he's over being responsible — the final scene shows him skipping town, but where is John going on Bloodline?

He's clearly heading far away from the Florida Keys, but John doesn't appear to have any plan in place at all. The decision was an impulsive one — he was unable to pull the trigger to kill Eric O'Bannon and he knew it was only a matter of time before he would be arrested for Danny's murder. After their tense encounter, John didn't even return home to pack a bag or, you know, give Diana a heads-up. (Yeah, he's really done being responsible.) His older brother's spirit has been with him constantly throughout the season and Danny was in the passenger's seat as John drove away. When he asked where John was going, he didn't appear to have an answer or a plan, prompting Danny to tell him, "just keep driving."

We'll have to wait another year to find out where John ends up, but his decision to leave is both significant and symbolic. Throughout the season he repeatedly told Meg and Kevin that, if it came down to it, he would take the fall for Danny's murder and leave them out of it completely. Although Danny was dead by the time they arrived, Meg and Kevin played a huge role in covering up the crime — in an effort to make the murder appear drug-related, they inflicted post-mortem injuries on Danny's body and trashed his apartment. They also hid the body until it could be disposed of and they've obstructed justice every step of the way — so these two are far from innocent.

When his siblings realized that video footage and circumstantial evidence implicated them in the cover-up, they turned on John remarkably quickly. Although he is of course the killer, it's not terribly surprising that Meg and Kevin's willingness to betray him caused John to reach his breaking point. On the surface, it appears that he is leaving town to evade arrest — but I think the bigger reason behind his decision is that he wants Meg and Kevin to be forced to take responsibility and deal with the ramifications of Danny's murder. Although John definitely has some delusions of grandeur when it comes to his role in the family, he genuinely believes that he's spent most of his life fixing his siblings' problems — and Meg and Kevin's betrayal brought out his long-simmering resentment. Now, he's decided it's their turn to take responsibility and perhaps he wants them to experience what he's felt for most of his life.

John's entire life has been firmly rooted in the Florida Keys and, given the abrupt and impulsive manner of his departure, it seems like it will be hard for him to stay on the run for an extended period of time. But, his departure sent the strong message to Meg and Kevin that he thinks it's their turn to step up and deal with the consequences of the murder.

More like this
12 Documentaries & Films About Cults From Netflix UK To Hook You From Start To Finish
By Kay Leong
This Netflix Doc Shows How An IRS Scammer Uncovered Secret Spy Technology
By Gretchen Smail
Is Ryan J. Vallee From Web of Make Believe Still In Prison?
By Kadin Burnett
How A Political Staffer’s Death Became The Center Of Alt-Right Conspiracy Theories
By Gretchen Smail
Get Even More From Bustle — Sign Up For The Newsletter