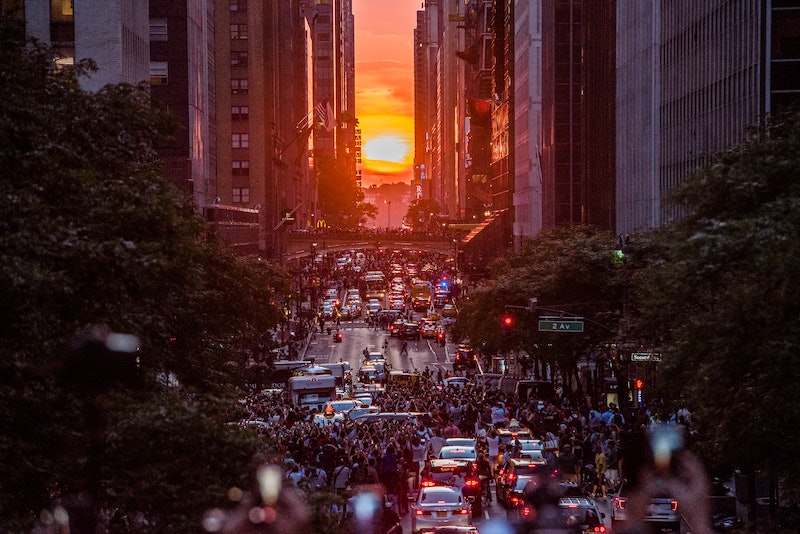 If you're a New Yorker, there's probably one question on your mind this weekend: Where can you see Manhattanhenge? If you live anywhere else on this wide earth, you probably also have one question on your mind, but it takes a slightly different approach — namely, what the heck is Manhattanhenge? Or, you know, you might have any other number of other things going on in your life more pressing than either of these possibilities, but prepare to have your curiosity satisfied whether you like it or not.

So what does it mean? Manhattanhenge refers to the semiannual event in which the sunset aligns perfectly with New York City's street grid, lighting up the north and south sides of each cross street on the island. The term itself was coined by the director of the Hayden Planetarium, Neil deGrasse Tyson, in 2001 after the New York Times identified the phenomenon as the Manhattan Solstice, which is technically incorrect.

"The word solstice translates from the Latin solstitium, meaning stopped sun, in reference to the winter and summer solstices where the Sun's daily arc across the sky reaches its extreme southerly and northerly limits. Manhattanhenge comes about because the Sun's arc has not yet reached these limits," Tyson explained in a post for the American Museum of Natural History.

As you can see above, the result is one of the most Instagram-worthy sights you'll see all year — assuming you'll be in NYC for Memorial Day weekend. This year's first Manhattanhenge will occur on Sunday, May 29, and Monday, May 30, at 8:12 p.m. both nights. On Sunday, the sun will appear as a half-disk, and on Monday, you'll be able to see it in its entirety.

Of course, this brings us to the question of where you're supposed to watch the event. Tyson suggests watching the sun set from Manhattan's wider cross streets, like the ones below.

For the best view, Tyson recommends arriving at your desired location half an hour early to watch the full sunset and picking a spot as far east as possible while still being able to see New Jersey. If you miss out this weekend, though, don't get too bummed; the next Manhattanhenge will occur this July. Happy Instagramming!