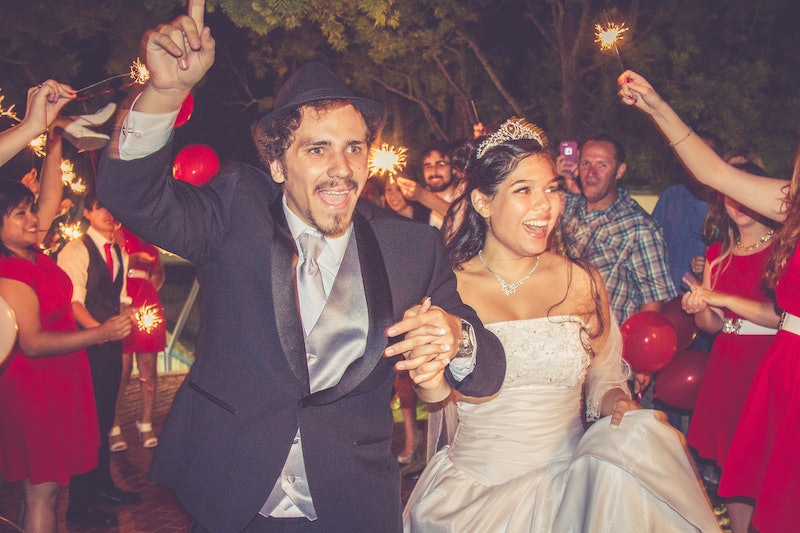 The couples on Teenage Newlyweds are in a time warp — they may be younger than 20, but they've decided to take on one of the most challenging milestones in a person's life: the choice to get married. And surprisingly, the Teenage Newlyweds couples are still together, even though it's been almost a year since they all got married. It's pretty impressive that these teens have gotten over a hurdle that lots of much older people find incredibly difficult. I think the major similarity among these teens is that they all seem to take marriage incredibly seriously, mostly for religious reasons. Some people may criticize these teens for getting married instead of having other, less serious commitments first, but they're confident in their choice to legally bind themselves to one another.

Another strange coincidence? Two of the couples were actually long distance before they got married in person. Even though getting married young is often considered an old fashioned phenomenon, that's a modern way that some couples meet. But these aren't your average teens. Most of them are incredibly mature for their age... and even if some of them wind up splitting up in the future, they've all decided to commit fully to their marriages.

According to an interview with FOX News, Halie and George met while George, who hails from Utah was a traveling missionary. He came to Halie's hometown in Arizona, and the two began a long distance relationship. After just four months, they decided to get married.

"My family always teased me that I would get married young, but I don't know why because I never really planned on it until I met George," Halie told FOX. And George explained that even though they didn't know one another very well before getting hitched, the process has been enjoyable. "We talked a lot but hadn't spent a substantial amount of time together so I've learned a lot about Halie since we get married, about how she handles problems and stress," he told the same outlet. "It's not bad; it's great."

And with such a positive attitude, it's not surprising they've managed to stay together, posting adorable IG pics that show they're still in the honeymoon stage.

These two are almost complete opposites. And while the saying goes "opposites attract," they can also be tough to stay married to. According to show bios, Travis is as conservative as Brenda is liberal, and while Brenda converted to Travis' Christian denomination, she was raised as a Jehovah's Witness.

All of these differences might be too much for these two to stay together forever, they certainly aren't too much to get them through the season, because the couple is still together as of now. The proof once again is in their social media posts — Brenda's Facebook relationship status is still "Married To Travis Wolf."

According to their bios, these two are high school sweethearts, and that's what most people think of when they imagine a couple of teens getting married. But according to the Teenage Newlyweds trailer, it sounds like they will face plenty of the problems that plague high school couples, too — most notably, the stress of dealing with limited finances and time while Emma is in school and Joey tries to find his way without higher education. But regardless of their issues, Emma and Joey are still together, working to improve their lives in tandem, and looking very adorable together along with their dog.