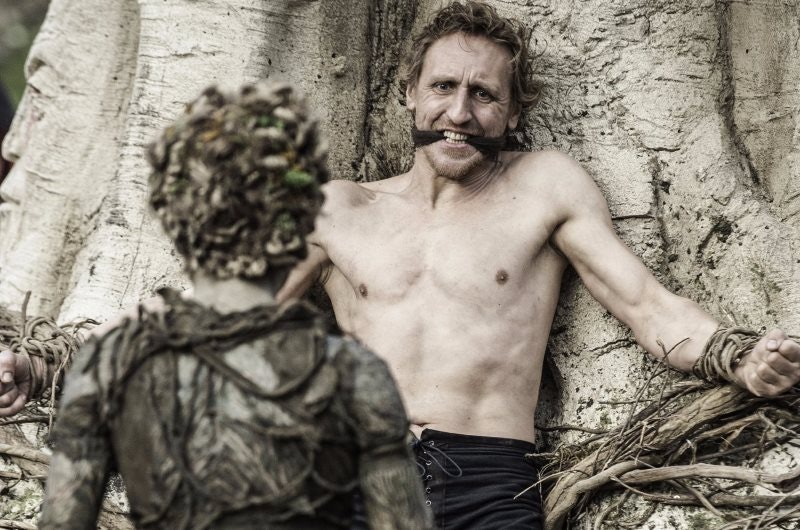 Game of Thrones has not been shy with the major mythology moments this season. So far, Season 6 has featured a visit to the Tower of Joy, the reveal of the meaning behind Hodor's name, and perhaps most intriguingly, the creation of the first White Walker. In a scene that was at once shocking and totally engrossing, Bran watched as Leaf plunged a makeshift dagger into the heart of one of the First Men, turning him into the first White Walker. As interesting as it was to see how the White Walkers came about, the most shocking thing about the scene was its parallels to the Azor Ahai mythos.

Azor Ahai, the great hero Melisandre and the rest of the followers of R'hllor are waiting to be reborn, was the man chosen to save the world from darkness the first time around. In order to fight, he needed a sword, but not just any sword. He needed a flaming sword which would come to be known as Lightbringer. After two failed attempts to temper the sword, he resorted to making the ultimate sacrifice. In order to make Lightbringer indestructible and infuse it with the necessary magic to fend off the darkness swallowing the world, he plunged the blade into his wife's heart.

Sound familiar? There are no hints that Leaf and the First Man she and the other Children of the Forest tied to a tree were lovers, but there was some serious magic in the blade she used to turn the man into a weapon. Add in the part where Azor Ahai is likely the man whom the Northerners call the Last Hero, the man with the dragonsteel blade that drove the White Walkers back and ended the long winter, and these two pieces of Westeros history start to appear to be connected.

There has to be some significance to one death imbuing a blade with fire and another blade imbuing a body with ice. Two ritualistic sacrifices involving stabbing a person in the heart are on either end of the battle between light and darkness. In the case of Azor Ahai, he made a personal sacrifice of someone he loved to save the world, while the Children of the Forest made a selfish sacrifice to save themselves.

Intention may be the deciding factor between what makes one side of this battle more righteous than the other. The White Walkers, for all the damage they have done, were born from a tragedy. They were created for battle, with their very humanity stripped away leaving nothing but anger and darkness behind.

If the legend of Azor Ahai is true, then the sacrifice he made was likely one that shattered his heart, but was necessary for the greater good of humanity. It was a selfless act, one that brought him pain and left him responsible for the death of his own wife. He saved the entire world at the expense of his own family and happiness. If the Children of the Forest had never resorted to creating the White Walkers, there would have been no need for Lightbringer, and Azor Ahai would never have been forced to kill his wife.

I don't believe it is a coincidence that these two sacrifices bear such strong parallels to one another. In the world of Game of Thrones, the concepts of good and evil have mostly been blurred. There is often a very thin line between a necessary sacrifice (like Jaime murdering the Mad King) and a selfish one (like Jaime throwing Bran out of a window). Seeing both sides of the story — the creation of the White Walkers and the creation of Lightbringer — speaks volumes about what the characters will have to do moving forward.

Clearly, choosing to protect the people they love will not be enough to fight back the White Walkers. Deeply personal sacrifices will have to be made, but are characters like Jon, Dany, and Tyrion, who have already lost so much going to be up to the task of choosing the world over their own self interests? Because in the battle between ice and fire, self sacrifice appears to be the only way to win.