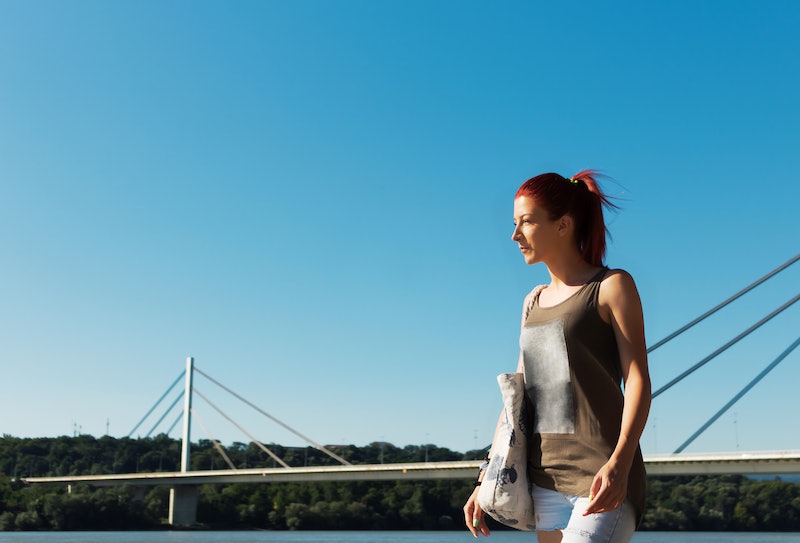 Aimlessly swiping left and right on an app usually only plays into one of your preferences: physical attraction. But when it comes to developing your key list of must-haves and can’t-stands, deciding what your greatest no-no in a potential partner is a great starting point. In other words: you need to figure out what your biggest deal-breaker is in dating, because while it’s OK to have some, too many specific qualifications for dating will weed out a big portion of your pool.

“A deal-breaker is an issue that is so important to a person, that if the other person will not compromise or concede, the relationship would probably not work out. They are things that are so deeply and utterly important to the person, that they could not be in a relationship with someone who did not share, or at least support and respect them,” psychologist and life coach, Dr. Nikki Martinez, Psy.D., LCPC tells Bustle. “Deal-breakers are usually formed throughout our lives, and start in childhood. They are made up of personal, or familial, values, beliefs, and their sense of right and wrong. They are further reinforced as we get older by our friends, our community, our school, and those we look up to. When we surround ourselves with like minded people, it strengthens these beliefs and deal breakers, even if they are off the common path.”

We all have different deal-breakers and ones that weigh heavier than others. Here’s what your biggest one says about you:

If Your Biggest Deal-Breaker Is… Financial Stability

Repeat after me: you are not a gold digger because you want someone to be employed. You’re also not one if you want someone to be on the same page as you are financially. Licensed marriage and family therapist Esther Boykin, LMFT tells Bustle that if it’s important to you that someone is financially stable, it indicates that you place a lot of value on feeling secure. And being financially solid means different things to different people, too: “It might mean that you want someone with a six-figure salary and a hefty 401K or simply want someone who can live within your means with a modest savings account or just very little debt,” she says. “However you define it, when finances are a deal-breaker, it usually means you crave security and a sense of reliability. After all, if they can pay their bills, it stands to reason that they are reliable in other areas of life.”

If Your Biggest Deal Breaker Is… Physical Attraction

“We are all initially drawn to people by looks, there is no arguing that fact,” Martinez tells Bustle. “While some of us are able to get to know someone and have them become more attractive based on their personality, it is more common that we are drawn to our type.”

If your biggest deal-breaker is how physically attracted you are to someone, then chances are, you hold your own appearance and lifestyle to a high standard. Martinez adds: “If you take your fitness routine seriously, you’re not as likely to be involved with someone who is the complete opposite.” Simply put, your interests would never be the same.

Boykin adds that while attraction is something specific to every person, if your only reason for not going on a date with someone is because they are a few inches shorter, it might show that you aren’t ready for a long-term relationship.

If Your Biggest Deal-Breakers Are… Hobbies And Interests

If you go on a first date with someone and you can’t name one thing that you have in common, or very few things, and you’re instantly turned off, your biggest deal-breaker might be surrounded by how your potential partner spends his or her free time. Boykin tells Bustle that this means you’re focused on finding a partner to share things with. And you likely are looking for more than just a lover, but you want a best friend, too. “Seeking relationships with people who share your interests means you expect your romantic partner to participate in things with you,” she says. “You want more than just a significant other, you want a friendship to have fun with and share similar activities.”

If Your Biggest Deal-Breaker Is… Their Lifestyle

So you meet someone online. They seems like everything you want in someone, but they shows up drunk to the date and continues to drink throughout the hour-long conversation. You might sense they have a drinking problem, or at the very least, they're not a match for you. Or, maybe someone you date casually mentions recreational drugs and that’s not something you’re comfortable with. Boykin tells Bustle lifestyle choices are one of the biggest deal-breakers for the majority of people, and for good reason: it indicates how someone chooses to take care of themselves and spend their time.

“These criteria, like drinking or smoking, can have immediate implications in a budding relationship and as such make good deal-breakers,” she says. “How you choose to live life is a big part of whether a relationship works out or not. If they like to party and your idea of an ideal weekend involves leggings, you are going to have a lot of compromising to do.”

Your Biggest Deal-Breaker Is… Sex

While the sex might not be great with anyone the first time you go at it, and often gets better as you get to know someone and work at it, Coleen Singer from Sssh.com says it can be a deal-breaker. “Although it’s entirely possible (and fun!) to explore new sex styles and activities with your partner, it’s probably unrealistic to go too far with this,” Singer tells Bustle. “A woman who wants to explore being sexually dominant is probably not going to have a good experience of convincing her sexually tame [partner] to let her spank [them]."

And apart from fetishes or preferences, frequency and sex drive play a factor too, Martinez adds: “You could have people who have very different ideas of what the ‘normal’ amount of sex is, and this difference could be a deal-breaker for each of them. You could have one person who thinks it is OK to be physical with others, as long as they love and come home to one person, while their partner may find this unacceptable.” If sex is a factor for you — which it is for many — it means that you want to have sex as a healthy, happy part of your relationship with someone who sees sex the same way you do.