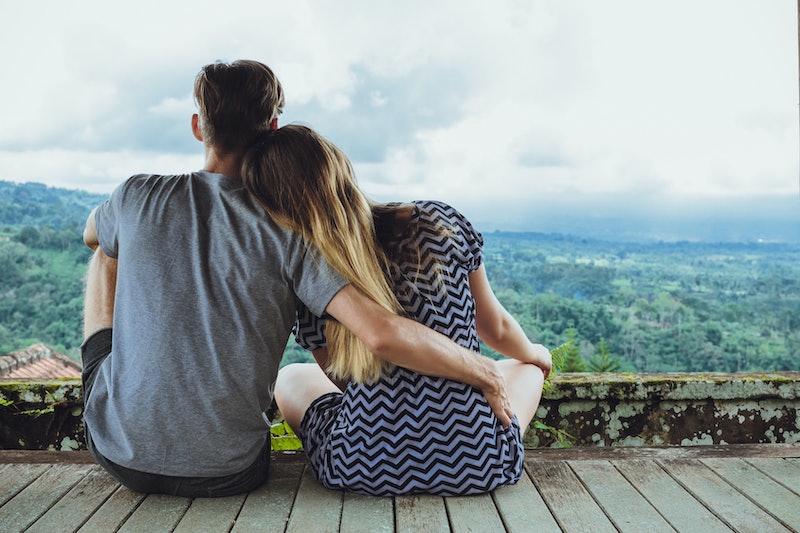 A recent study has confirmed that we all have deal-breakers in relationships. But what it found about these deal-breakers is that they’re different for short- and long-term relationships. In other words, what flies for the short-term isn’t going to make it for the long-run, but because love is more part of the equation for the long-term, people are more forgiving and less willing to call it quits over something someone in a short-term relationship might. Have I confused you yet?

The study was conducted by researchers from three U.S. universities, one Australian university, and one Singapore university. The team was able to deduce through a series of studies that while deal-breakers are essential in finding the appropriate mate, we sometimes take them a little too seriously.

"People are far pickier now because of the apparent availability of new attractive partners with online dating and mobile apps," the study's author, Dr. Peter K. Jonason tells Bustle. "These apps have created a rather superficial and checklist style of dating. We dismiss people prematurely that we would not have if we met them because they have something we think is a deal-breaker but if we developed feelings for that person we would accept it."

Dating coach Francesca Hogi agrees that modern dating feels like we have unlimited options, therefore allowing us to be more picky than singles were just a few decades ago. Because of this, some people are looking for perfection and having a list of deal-breakers adds to that.

“When a woman tells me ‘I won't date anyone shorter than six-feet-tall’ I press her on her why," Hogi tells Bustle. “If you can tell me that when you look back in five, 10, 20 years and say, ‘I am really glad I didn’t date that great guy because he was only 5’9” — no way he could have made me happy,' then OK, for you that’s a deal-breaker. I happen to think that's not truly valid as a deal-breaker, but that's an individual decision. At least ask yourself the question and don't just arbitrarily decide who is worth giving a chance.”

Here are the top 10 deal-breakers for long-term relationships, according to the study.

1. They Have Issues With Anger Or Are Abusive

Whether it’s short-term or long-term, this is definitely a deal-breaker. No one deserves this.

2. They’re Dating Other People Including You

Unless you're non-monogamous, finding out your long-term partner is seeing other people can definitely change things.

Long-term relationships are built on trust. Without trust you can’t even evolve to being in an LTR. If you've tried and tried and still can’t trust your partner, it's time to re-think things.

4. They’re Married To Someone Else

Well, unless it's an open relationship, I feel like this one just goes without saying as to why this might be an issue.

5. They Have Health Issues Or STDs

While the survey found this was also a deal-breaker for the short-term, it seems like it's ending long-term relationships, too. What's up with that? If you’re married, doesn’t it include the line, “in sickness and in health?”

6. They Have Alcohol Or Drug Abuse Problems

This is a tough one because you want to help your partner and stand by them during tough times. But if you’ve done all you can to help someone with a substance abuse problem, but they’re not ready to help themselves, it can be hard to continue the relationship.

7. They’re Not Attentive Or Caring

Although sometimes people like to be left alone, attentiveness is important in showing your partner what they mean to you.

8. They Dismiss Your Interests

Your interests are interesting and amazing and exciting. Anyone who thinks otherwise, probably isn’t worthy of your time.

9. They Have Poor Hygiene

I’m not even sure how one could possibly make it to a long-term relationship situation when it comes to poor hygiene. How do you get over that long enough to get to the point where you're serious?

Again, personal care is proving to be more important in LTRs than you probably thought. But hey, smells matter in relationships.