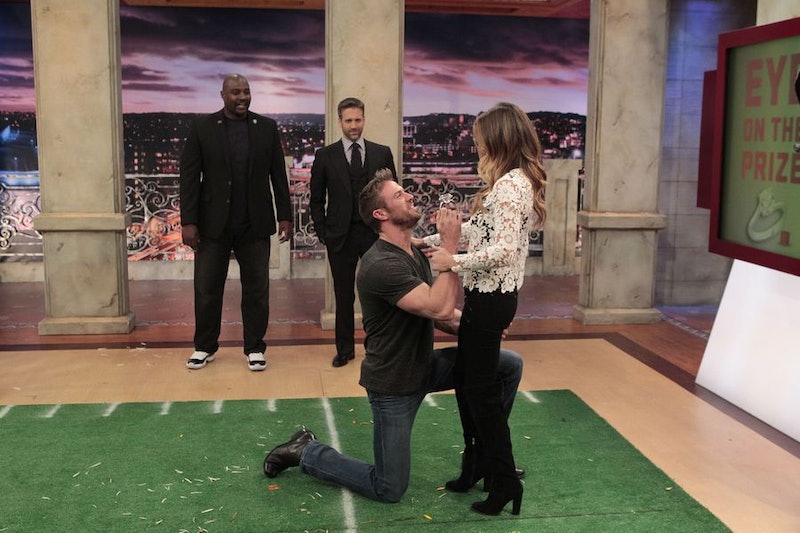 We're only two episodes into The Bachelorette so far, and I can't decide how I feel about Chad. Is he the actual worst, or is he the best for making this show even more entertaining than it already is? Next week's episode may be the deciding factor, because according to the promo, it looks like things are going to get a bit violent. And after seeing some of the footage that is to come, I can't help but wonder if Chad punches James Taylor on The Bachelorette . What's going on?!

So far, all we know is that Chad is going to get really, really mad and supposedly starts punching things (like a door), and ends up a bit bloody. The promo for next week's ep kind of expands on what we saw in the mega trailer that aired after the premiere; Chad is apparently going to flip out after one of the guys after he pushes him a little too far — supposedly James Taylor, since he was the guy bleeding. I know what you're thinking: We're supposed to believe that sweet, innocent James Taylor provokes him enough to make Chad want to hit him? Yes, I think we're supposed to believe that, but it remains to be seen whether or not that's actually true.

After all, what we see in preview clips for this show isn't always what actually happens, and there is that chance that editing had a lot to do with what we're seeing this time. There's no way to know what goes down until the episode airs next week, but I think it's safe to say that Chad does seem pretty intense at times... even if I think those bloody knuckles came from him punching that door.

The suspense will have to live on until next week. But no matter what happens, there's never going to be a dull moment with Chad around. Say what you want about the guy, but he knows how to keep things interesting!