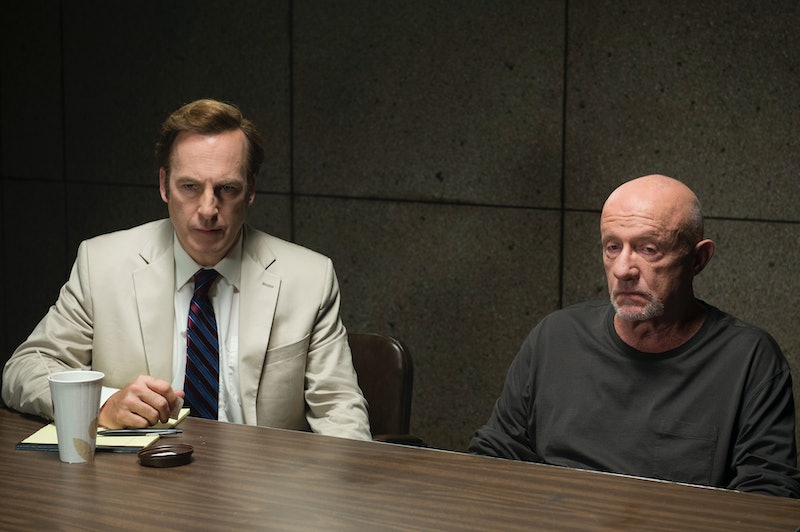 It's easy to say that AMC's Better Call Saul is a prequel spin-off of the wildly popular and critically acclaimed Breaking Bad. I mean, it's true and all, but both shows exist in different time periods and semi-separate universes. The Better Call Saul writers say they have worked hard to distinguish Better Call Saul from Breaking Bad , a topic discussed at a recent Writers Guild Foundation event held at the WGA Theater in Beverly Hills. For five seasons, Breaking Bad captivated audiences with the world of science teacher-turned-meth dealer Walter White, but Better Call Saul has evolved into a completely different show, following lawyer con man Jimmy McGill (played by Bob Odenkirk) on his journey to becoming Breaking Bad's Saul Goodman.

So, how did the writers establish a different tone and world for Better Call Saul? Co-creator and executive producer Peter Gould tells the audience at the Writers Guild Foundation event that there was always a different vision for the show since the first conversations and pitches about it, which occurred as the Breaking Bad's final season was in post-production. "We thought of it as a single camera, half-hour comedy like M*A*S*H," he says. But ultimately, the idea took a different shape. Co-executive producer Gennifer Hutchison says a lot of Better Call Saul's tone comes from the character of Jimmy himself. "We started breaking it like a Breaking Bad episode, but then we found that Better Call Saul goes faster than Breaking Bad," she says. "I think what we discovered a lot with Jimmy and how Bob plays Jimmy."

The tricky part, Hutchison tells the audience, is when Breaking Bad alum Mike Ehrmantraut (played by Jonathan Banks) appears in the series. In Better Call Saul, Mike isn't yet the cold-hearted killer he is in Breaking Bad, but his scenes are still reminiscent of the parent series. "Mike tends to live in more of a Breaking Bad world and shifting between those two worlds can be tricky, because you don't want it to be jarring," she says. "It was a learning process of how do these characters talk, how do they go through the world."

And then there are the more technical aspects of production. Better Call Saul executive producer and director Tom Schnauz says that there were conversations during Season 1 about how the series could be shot in a different style than Breaking Bad. "They had a lot of handheld so we encouraged our directors to stay away from that and do more locked off, off-center shots, more unique framing," he says. "We also talked about never doing shots from inside of things because that was so Breaking Bad, but that went right out the window. You cannot resist — if you see a toilet, you're going to want to put a camera inside of it."