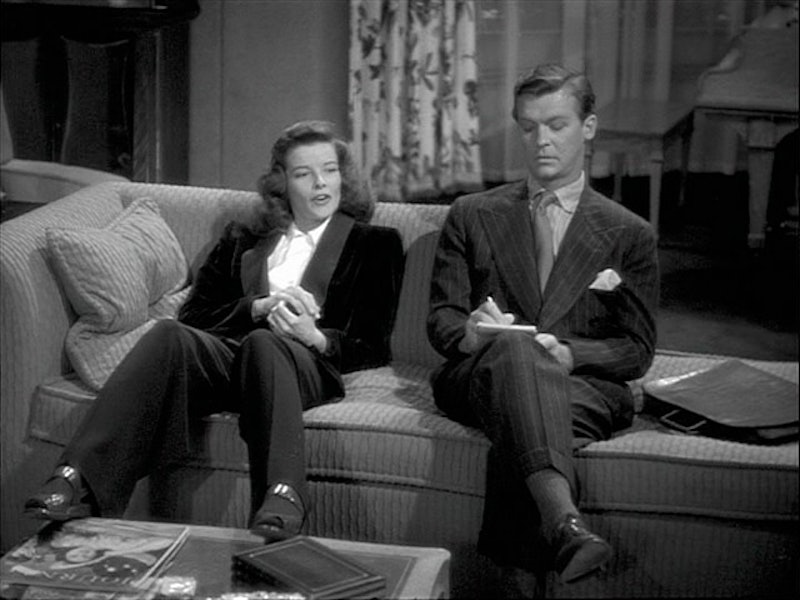 While there's nothing wrong with loving a frilly dress or red tube of lipstick, women have been told for decades that there's something off about preferring a good cummerbund or set of tails. But since the lost generation took it up in the Roaring '20s, the female tuxedo became a feminist tool, often allowing women to speak a narrative that might not be as loudly heard while sporting a pair of heels.

The tuxedo isn't just a snazzy smoking jacket: It's a statement that undercuts what society thinks is "appropriately feminine." The wearer can use it to quirk an eyebrow and challenge the mainstream culture's definitions of gender, sexuality, and femininity without using any words. To this, I know, some will disagree.

But if clothes don't make a political statement, then the question needs to be asked: Why were women continually stopped from wearing pants in spaces shared with their male peers? Could it be because, in such contexts, pants signified power? Would pants mess with society's expectations and hierarchies?

As the Washington Post put it, "The sleek pantsuit allowed a woman to dabble in a man's world and leave her frothy universe behind. In taking on his evening uniform, she assumed his mantle of power and his cloak of charisma." Suits have long given the babes wearing them an outlet to try on the kind of power that's usually allotted to men, while challenging strict gender rules along the way. Below are seven times the tuxedo was used as a feminist tool — try not be inspired.

When you think of blues singers during the Harlem Renaissance, you might think of beaded flapper dresses that shimmer in smoky New York clubs; but singer Gladys Bentley saw that look and thought "to hell with it." One of the first openly gay nightclub performers, Bentley decided to accompany the brass sounds of jazz bands not with feather boas, but with a signature white tuxedo. According to Yahoo! Style, she felt "more comfortable in men’s clothing than fanciful dresses."

She was a bold woman who didn't see the need to conform. Feminist magazine Bitch Media explained, "Bentley pushed the envelope both on stage and in the streets, where she donned men's clothing ... wore her hair short and closely cropped, and flirted with women bar patrons while tackling the piano." While all that might seem downright scandalizing for the '20s, many people appreciated her boldness.

James Wilson, author of Bulldaggers, Pansies, And Chocolate Babies, wrote that Bentley "gave the impression of an independent, self-assured, and sexually empowered individual. Her multiple personae teased the boundaries between male and female; homosexual and heterosexual; aristocrat and working class; and white and black."

German-born Marlene Dietrich used the cummerbund-cinched tux to expand the definition of femininity, proving that to be a woman didn't have to mean donning pearls. Instead, she exuded a femme fatale appeal underneath a top hat.

In her first American movie Morocco (1930), she played a cabaret singer who showed up on screen in a tailored tux and bow tie; and she essentially started a movement. According to the BBC, "Still decades away from trousers becoming accepted as a fashion item for women, it was a bold move deemed as scandalous by some. But Dietrich, who performs a number in the film before downing a glass of champagne and planting a kiss on a well-to-do female punter, was all about pushing boundaries." Champagne, woman on woman kisses, and wing-tipped shoes? Oh my.

So how did wearing a classically male piece redefine femininity? American playwright Arthur Laurents explained in the 1995 documentary The Celluloid Closet, "What’s amazing [is that] I don’t think [anyone has] done anything as delicious, sexually, as that since. [The film makers] didn’t pretend it was anything but what it was; [Dietrich] was doing it to turn on both the woman and the man, which appealed to everybody. As it should; it was so free.”

In that same vein, political site Taki's Magazine reported, "Far from suggesting male or transvestite traits, she reset the bar for women while still being sought after by men. In fact, seminal macho man John Wayne called Dietrich 'the most intriguing woman I’ve ever known.'"

Even though she shed her culturally-approved "female trappings" Deidrich was still hella lusted over, proving that one didn't need the help of strict gender norms to be womanly.

Unlike Dietrich or Hepburn, Josephine Baker didn't make the pantsuit or tuxedo her signature look. She was all glamour, silk robes, and cold diamonds — one of her most infamous performances being the Banana Dance at the Folies Bergère, Paris (1927), where she performed in nothing but a tiny skirt made out of bananas and strands of beads.

Her official website declares that she was famous "for barely-there dresses and no-holds-barred dance routines, which aren't exactly the images most of us might conjure up when coining a woman "androgynous." But the American-born French singer, movie star, and dancer also came out on stage in top hats and tuxes, straddling both gender presentations.

What might her tux be a symbol of, you ask? Sure, it might just have been a costume to entertain in, but it could have also been a message. The Washington Post explained the rules of gendered wardrobes as such: "A host of stereotypes that connect gender to attire then proceed to help us make sense of the world. They provide a shorthand for understanding relationships and hierarchies." Here was a woman of color in Paris, however, sensationalizing the crowd, taking Europe by storm, and on her was to becoming the first Black female movie star, all the while smashing down the expectations of race, class, and gender of her time. IMO, the tuxedo helped highlight those feats.

Ms. Hepburn was a tomboy through and through, constantly choosing comfort while simultaneously flipping convention the bird. The New York Post reported, "In the ’40s and ’50s, leading the pack of irreverent actresses was Hepburn, whose disdain for glamour and public preening matched a penchant for collared shirts, flat shoes, and impeccably fitting suits."

Hepburn wasn't into doing something just because it was expected of her. She broke gender convention by ignoring the script society wrote for women and choosing, instead, comfort. From walking around in her silk underwear on set until her confiscated pants were returned to her, to famously telling Calvin Klein, "Anytime I hear a man say he prefers a woman in a skirt, I say, 'Try one. Try a skirt,'" she proved what she thought of gender presentation: It was nothing but a figment of society's imagination.

In a 1981 interview, Barbara Walters asked Hepburn whether she even owned a skirt, and she replied, “I have one, Ms. Walters. I’ll wear it to your funeral.” Hepburn was clearly tired of the notion that a garment makes a woman. She was unapologetic over her preferences, and refused to see them as an issue. So was it any wonder that the size of a tuxedo lapel was just as much of a consideration for her as the length of a gown's hem?

In a decade during which it was still controversial to wear trousers as a woman, the suit represented a newfound fierceness. It snatched away something that was classically masculine, and with the dusting off of a lapel, many women shed their preconceived ideas of being delicate and submissive. Actor Violeta Sanchez told the BBC that it was shocking to see a woman "take possession of man’s attire, and the freedom it gave her. It took her out of that spot where she was fragile."

But much of society wasn't on board with this change. According to Business Insider, when socialite Nan Kempner tried to enter chi-chi restaurant La Côte Basque in New York while wearing her Le Smoking, she was turned away. "Yet in the defiant style befitting of this androgynous, no-nonsense look, she removed the bottom half and waltzed into the restaurant wearing the jacket as a thigh-skimming mini dress instead. The manager later said that for formal dining attire trousers were as unsuitable as a bathing suit." How eating your dinner in panties was less scandalous than doing so in cigarette pants, I will never understand.

Business Insider further explained, "So, dressing in a YSL trouser suit declared the wearer was irreverent, daring, and on the cutting of fashion, while suggesting their alignment with burgeoning feminist politics —le smoking effectively demanded: 'If men can wear this, why can’t I?'" Once again, a silk lapel challenged close-minded gender norms.

Janelle Monáe is a singer and songwriter often beloved for her James-Brown-meets-acid vocals, her pompadours, and some classy-as-hell tuxedos. But why does she constantly gravitate towards a black and white three-piece?

In an interview with i09, Monáe explained her uniforms, "I feel like I have a responsibility to my community and other young girls to help redefine what it looks like to be a woman. I don't believe in men's wear or women's wear, I just like what I like. And I think we should just be respected for being an individual."

By wearing tuxedos, she's working on helping her audience abandon expectations of gender. She's helping carve out a space for women to be themselves in, no matter how their interpretations of womanhood influence their style.

In the same interview, she added, "There are lots of young girls out there who are struggling with their identities… afraid of being discriminated against or teased. I take risks and use my imagination so that other people will feel free and take risks. That's my hope."

Monáe is clearly leading the way towards individuality, not gender-assigned rules.

Though almost a century has passed since Gladys Bentley first took the stage with her spiffy white tuxedo, much of society is still adamant on not "confusing" genders. Just ask Aniya Wolf, a student at Bishop McDevitt High School in Harrisburg, Pennsylvania, or Claudetteia Love from Louisiana — two openly gay students who met major push-back when they planned to wear tuxedos to prom.

As The Atlantic pointed out, "Psychologically, there’s still a vast gap between a male garment adapted for a woman’s body and a male garment." While a tux that's feminized with apologetic trappings like tight fits and frilly blouses is generally perceived as OK, a straight-up men's tuxedo on a woman or feminine person is not.

In the case of Wolf, Mic pointed out that "high school is the place gender norms are set. While children are given positive and negative reinforcement for their gender presentation long before puberty — think toy cars versus Barbies — it's during and after puberty that norms of dress and behavior are most stringently solidified, policed, and enforced." High school often teaches us what's accepted by society at large, and tries to smash down any divergence along the way. Mic continued, "You could go as far as to say high schools are the prime enforcers of the gender binary — students enter high school as kids and emerge as 'men' and 'women.'"

So what is the tux a symbol for in this case? Well, a right to stay true to your identity.

Whether a woman in history used a set of tails to express her identity, to challenge gender norms, or to broaden the definition of what it meant to be feminine, one thing is for certain: Fashion can help us make sense of the world and understand it. It should follow, then, that fashion can also help us rewrite the rule book.