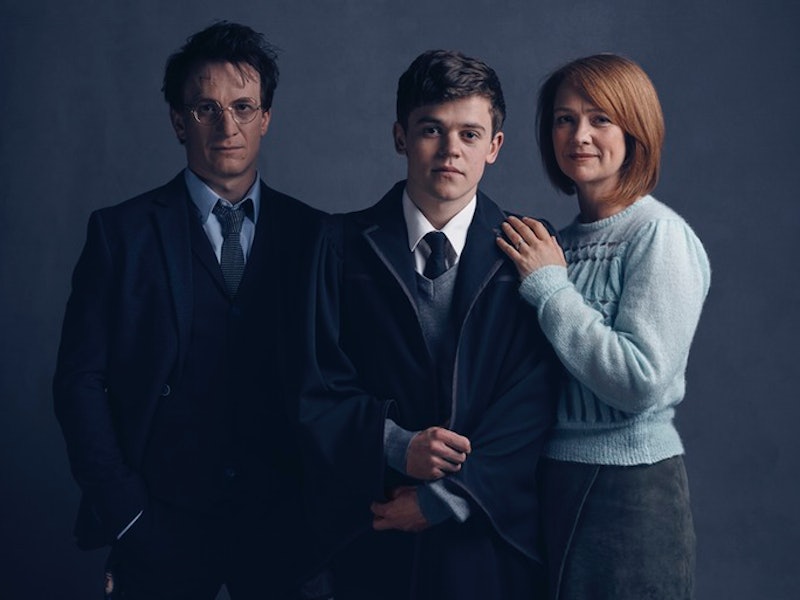 You could hear the collected peals of Potterhead squeals when the first official Harry Potter and the Cursed Child images were released. The newest goodie from Pottermore is giving fans an inside look on the upcoming Palace Theatre London play, and that's comforting to many of us who... well, can't get our hands on some floo powder at the last minute. Yes, if you happen to be a lowly No-Maj in America (or just broke in any other non-United Kingdom location) these sneak peaks are all you have. Unless... wait... will J.K. Rowling have a change of heart and release this to the masses? If we ask real nice, will Harry Potter and the Cursed Child become a movie?

As of right now, it seems like a hard "Probably Not," and that "Probably Not" comes from the mouth of God herself. Back in March Rowling addressed a fan's excitement over hearing The Cursed Child would eventually become a movie. Unfortunately Rowling denied this, sticking firmly to The Cursed Child being a play, and for the time being, that's all it would be. But hey, kids, at least we're getting three Fantastic Beasts And Where To Find Them films?

This doesn't necessarily mean that The Cursed Child will never make it into film; I'm sure Universal Studies could use a few new Potter rides. It just means that Rowling and friends aren't rushing to make it now, and from a financial standpoint, that makes a lot of sense. Part of the appeal of Harry Potter and the Cursed Child — besides, duh, eight Harry Potter story — is the exclusivity of it all. It's a limited run in a country that a huge amount of the Potter fan demographic can't get to without a plane. It's a play so meaty that it has a part one and two, and hell to the parent who doesn't get tickets for both. With The Cursed Child existing in its current form, it's a major cash cow. So yeah, creating a little cash calf by announcing an upcoming film is definitely going to take away from that excitement.

On a personal level, I would have a really hard time watching a Cursed Child movie without the whole gang returning, and it would take at least another decade before that would be a realistic sell. Lord knows none of them were successfully selling "30-something-year-old wizard parents" in the Deathly Hallows epilogue. And maybe that would actually work, because if the OG Harry Potter Holy Trinity even wanted to return (I don't think any of them are ready to jump back into this), they'd have to be secure with the territory covered in their respective careers. Daniel Radcliffe is recently washing ashore as a talking corpse in Swiss Army Man. Emma Watson has a heavily hyped turn as Belle in the live-action Beauty and the Beast . And Rupert Grint... I'm sure he's fine.

Point is, in the context of the theater I'm perfectly good with the Cursed Child re-casts, but I would like to reunite the trio if we're gonna tackle of the movie. And as a strategic financial movie, waiting a decade or so would be a brilliant idea, because millennial Potter fans will be able to take their own children to the theater. It's win-win.

If you don't have that kind of patience, though, there is another option. Harry Potter and the Cursed Child will be released as a book on Pottermore and through Scholastic simultaneously. One catch, though: it isn't a novel. Instead, it's the play's script. So on one hand, you won't really be missing the story of The Cursed Child. On the other hand, it's going to feel like paying for fanfiction. Your call, tho.

Previews for Harry Potter and the Cursed Child start June 7 with the play debuting officially in July. I won't be there, so stop asking.