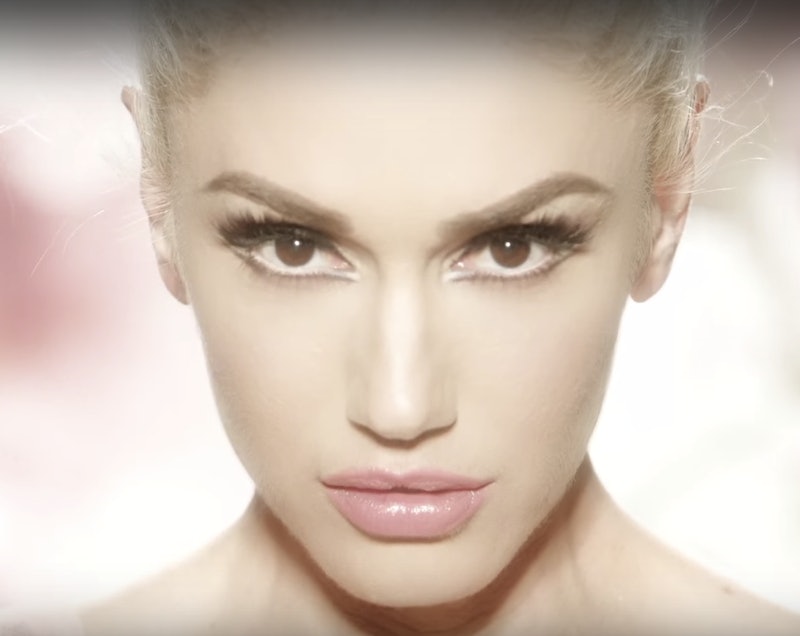 Gwen Stefani has had quite the year. Aside from releasing her first album in nearly 10 years, This Is What The Truth Feels Like , her love life has also been a rollercoaster of emotions as of late. Between her split from ex-husband, Gavin Rossdale, and falling in love again with fellow The Voice host, Blake Shelton, it's been one heck of a past year. So, it only makes sense that her new music reflects what she's been going through. Her latest single is no different. The Gwen Stefani "Misery" lyrics describe what it's like to have a crush, and that makes the song oh-so-relatable.

However, it's not just the lyrics to her latest single alone that make her the expert in the field of falling for someone. With the release of the "Misery" music video, fans also get an inside look at the exact emotions Stefani is expressing in her lyrics thanks to the help of her wardrobe and the video's own visual aesthetics. Between the use of an elevator, her black and red color scheme, and even some smoke effects, she proves that crushing on someone isn't always as easy as you want it to be. Instead, it can be an inner turmoil of its own. She just gets it. So get ready for "Misery" to bring back some of your own new crush feels that you've since tried to block out of your mind. These lyrics are just too real.

Ever formed a crush on a close friend or a co-worker? Well, Stefani sure knows what that feels like. These lyrics are the moment you realize how much you enjoy that person's company.

And, no matter how much you may want to deny your crush, the heart ultimately wants what it wants.

The struggles of forgetting a crush are real.

When the crush is so deep, you can't even get your words straight.

While the word "Misery" might seem a bit exaggerated from the outside looking in, in the moment that word just couldn't be more fitting.

7. "Enough Of This Suffering."

Now comes the regret of wishing you never even met this person.

8. "At The Door, I'm Thinking Things I Never Thought Before."

But, if you know you're going to see them soon, the feelings suddenly all come swooping back.

9. "What Your Love Would Taste Like. Give Me More."

And you have definitely thought of your crush in a non-PG way before. Let's be honest here.

10. "Don't Sell This Feeling At The Grocery Store."

Your crush makes it hard for you to focus on even the most mundane tasks — Like riding a bike. Or food shopping.

And in the end, you're just mad at your crush for making you like them so much. It's all out of your hands.

Seriously, Gwen. The fans can feel your pain. Watch the rest of her new "Misery" music video above.