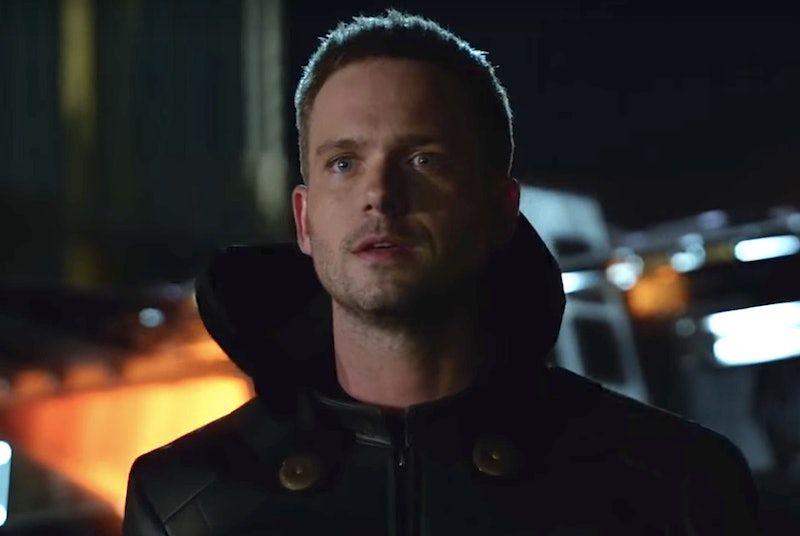 After a season full of time-traveling adventures while on a mission to hunt down and stop Vandal Savage from taking over the world, the Legends of Tomorrow Season 1 finale saw the Waverider team finally take down the villain — in three different time periods no less — before setting up Season 2. The final moments of the season finale revealed a new character before leaving us with a cliffhanger. So, who is Legends of Tomorrow's Rex Tyler from DC Comics and how could his comic book history play into Season 2?

Well, in DC Comics Rex Tyler is known as Hourman, a biochemist turned superhero who discovered a "miracle vitamin" called Miraclo. Since he discovered Miraclo, Rex used himself as the test subject and discovered exactly how the vitamin could help the human body. With the help of Miraclo, Rex is granted superhuman abilities including strength, agility, and durability as well as night vision and the ability to breath underwater. But, there are limitations to the vitamin, specifically that it only lasts for 60 minutes — hence the name Hourman. At the beginning of his time as Hourman, Rex sticks to helping out average New York City residents who find him through an ad placed in the local newspaper.

Rex goes on to help found the Justice Society of America and begins working alongside superheros with magical powers or artifacts that give them strength. As a result, Rex begins to experiment with Miraclo in order to become stronger. Unfortunately, it has a negative side effect on his body and nearly kills him, causing Rex to give up both Miraclo and the moniker of Hourman — though he still helps the Justice Society of America when possible. Without his superpowers, Rex turns to business and acquires a company that he renames as Tyler Chemical Company and settles down with a wife, with whom he has a son named Rick (who later takes up the mantle of Hourman through an improved version of Miraclo).

As for how this could relate to Legends of Tomorrow Season 2, so far all we know about the show's version of Rex Tyler is that he's connected to Mick Rory and the other members of the Waverider team, and he's a member of the Justice Society of America. Does that mean he's already discovered and begun using Miraclo? I'd say it's a safe bet that he has, and if he sticks around long enough in Season 2, his major arc could have to do with abusing the vitamin to grow stronger.

But, the version of Rex Tyler could just as easily be a means of introducing the new threat to the team in Season 2. Perhaps he's already lost his powers and he's simply on a time travel mission for the Justice Society of America and the Waverider team's future selves. Truly, there are many ways in which Legends of Tomorrow could adapt Rex Tyler for the series. Although it seems likely they'll include his superpowers in some way, it remains to be seen until the show returns.