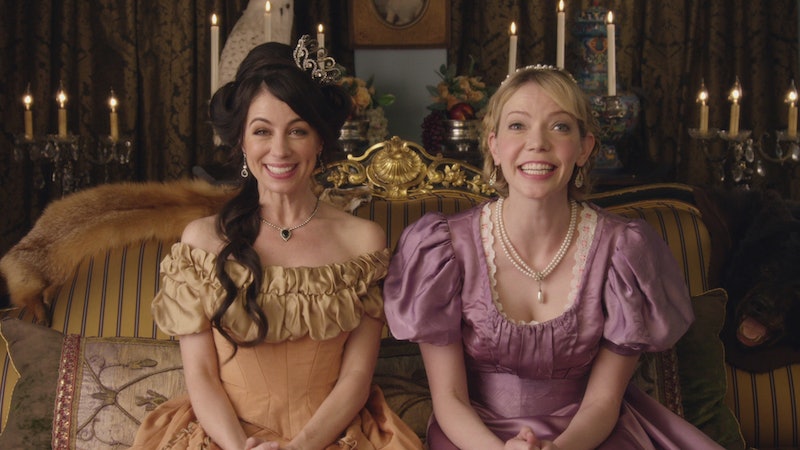 Jason Ritter has just stormed onto the set of Comedy Central's Another Period , created by and starring Natasha Leggero Riki Lindhome, as his character Frederick Bellacourt. He stands in front of his on-screen sister (Lindhome) while the cameras roll, and tells her their incestuous affair must come to an end. He screams at her: "It's so evil that women have bodies that force men to do terrible things to them!"

Another Period is set in lavish Newport, Rhode Island in 1902, but this alarming — albeit hilarious, thanks to Ritter's delivery — sentiment doesn't seem entirely out of place in 2016. Victim blaming, wherein a woman is partially or wholly blamed for a sexual or violent act against her, still happens all the time. Though Frederick and his sister Beatrice's affair is consensual, once Frederick decides he can no longer tolerate it, it becomes his sister's burden.

"This scene was sort of like the birth control debate that was and is still is going on: if you take birth control, you're a slut, just by existing," Lindhome explains at Comedy Central's Santa Monica office a few months later. "Last year a scientist said a woman shouldn't be allowed in labs because they would just want to marry him, or they would be too tempting sexually. Scientists in lab coats and goggles are too tempting sexually?"

Lindhome is referring to Nobel prize-winning scientist Tim Hunt, who said women shouldn't work in the same labs as men because "they fall in love with you and when you criticize them, they cry." He later quit his position at a UK university over the sexist remarks, and issued an apology. He was just trying to be honest, he said, but "did mean the part about having trouble with girls."

With their Comedy Central show, which was just renewed for a third season, the two women acknowledge today's sexism by showcasing their characters in the even less-PC climate that existed a hundred years ago. "We do the Colbert Report thing where we vehemently take the opposite side of what we believe," says Leggero. Lindhome offers an example: "My chararacter is very pro-hatchet, which is like pro-gun now."

There's no denying that the characters, Beatrice and Lillian Bellacourt, are entirely unlikable. They are obsessed with money, fame, do not consider the well-being of others, and are extremely selfish. In the pilot episode of the show, they even got into a fist fight with Helen Keller. Ouch.

"They are such a product of the time period," Leggero says. "It was this amazing time in American history where people didn't pay income tax for a decade and they were living like rappers. Ninety percent of the wealth in all of America in 1902 was in Newport, Rhode Island, so everyone else was living so poorly. But in Newport they were erecting marble palaces, with 40 person staffs, imported everything. It was a golden age."

With its excess, over-the-top characters, reality TV-esque interview segments, and a clear social divide, the show appears to be the child of Downton Abbey and Keeping Up With the Kardashians. The show's creators confirm this theory, and admit that Arrested Development and The Real Housewives franchise were also influences in Another Period's creation. So if these characters were Kardashians, who would they be?

"I think Natasha would be the Kim/Kourtney mix, because she has like eight children on the show, and she doesn't really talk to her husband, it's very similar," Lindhome says.

"Riki would be... Rob? That's the dumb one," Leggero determines.

In the Season 2 opener, Harriett Tubman makes a cameo as a branding expert. Yes — you read that right. "What if Harriet Tubman is trying to beat everybody else to brand this underground railroad? Obviously it's not based in reality. Obviously, she's such a revered person," Leggero says. "But we like to..."

Lindhome finishes her thought: "Demystify these people. [Tubman and Keller] were extraordinary people, but they still existed in society and had boyfriends and regular people problems. It's interesting that one person can get credit for an entire movement."

The creators' unorthodox approach to conveying famous figures may not be suitable for all viewers. After all, it's not every day we see our shows' protagonists beat up Keller. But the women assure that their extreme tactics are all part of a bigger plan to make people laugh, and maybe even aid the feminist discourse.

"Women have come so far," Leggero says. "Hopefully we'll have a women president, but 100 years ago when this show takes place, women weren't allowed to read or vote," she says. "They would tell women it would shrink their ovaries if they read college level books. The only way they could rise up was through society — if they were lucky enough to have been born rich."

Though the Bellacourts live in a decidedly sexist time, equality of the sexes in 2016 is far from perfect. According to a PEW study, women working full-time make just 84 percent of what their male counterparts make. And according to The Washington Post, congress is 80 percent male, even though the American population is 51 percent female. And, according to a study from the Institute for Women's Policy Research, 15.5 percent of American women live in poverty, as opposed to 11.9 percent of men. And of course, the disparity for all of these statistics increases outside of the U.S.

Back on set, Ritter's character continues to blame Beatrice for her feminine nature. He calls out her "supple breasts" for seducing him, saying: "They're pointed right at me!" he yells. Beatrice retorts: "I can't point them any other direction. I've tried!"

It's hilarious, but it's also less comically, true. In 1902 and more than a hundred years later in 2016, women are still being bullied for simply being women, and they remain unequal players in the United States and beyond. Another Period is an accessible vehicle for learning about the sexism of the time, and acknowledging how much (and how little) has changed.