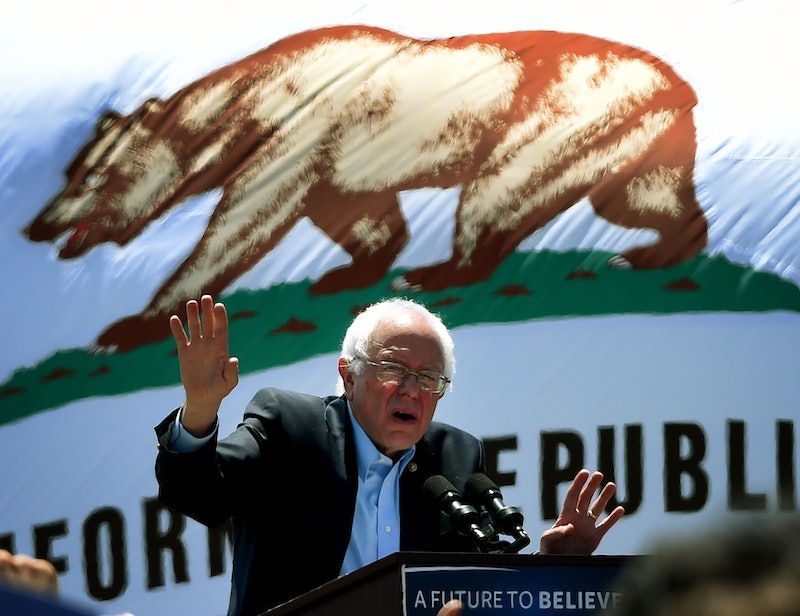 On June 7, the single biggest state in either party's primary process will finally head to the polls — the great state of California, home to some 38 million people. And even though a tremendous amount of drama has already drained out of the nominating races, with businessman Donald Trump having already sewn up his nomination and former Secretary of State Hillary Clinton having nearly sewn up her own, it'll still be a big date on the political calendar. And if you want some predictions for the California primary and how it might play out, here are some things you could reasonably imagine happening.

California boasts the most pledged delegates of any contest for both parties — 546 for the Democrats and 172 for the Republicans. The huge size of the Democratic haul is slightly deceptive, however, since like all the Democratic contests, California uses a proportional system of delegate allocation. As such, it's important to remember that in any analysis of what might happen in the Golden State between Clinton and Sanders, if it's any outcome besides a staggering, landslide Sanders win (in the vicinity of 30 to 40 points or so), then the truly meaningful victory goes to Clinton — she can afford to lose narrowly, or even solidly, so long as she doesn't suffer a historic collapse.

And the polls heading into the primary, so far at least, have been favoring the former Secretary of State — she has held a consistent lead in the polls, though it appears to have shrunk in recent weeks, according to RealClearPolitics. Sanders, on the other hand, has to rattle off one dominating performance after another, though regardless of what happens, he's made it clear he's staying in. So, with that in mind, here are some possible outcomes.

1. Clinton Wins In A Double-Digit Landslide

This, needless to say, would be the most desired outcome for the Clinton camp. She'll almost surely secure the nomination no matter what happens — she's up big in pledged delegates, states won, and the popular vote, meaning the superdelegates (as they historically always have) will be following the will of the Democratic majority in backing her.

But still, it's fair for her to feel some angst about her own perceived weakness as a prospective nominee. Sanders may not be close to actually contending for the nomination at this point, but he is sowing doubts about her ability to coalesce the party. A strong double-digit victory in California, after weeks of Sanders touting the state as his potential savior, would put an end to a lot of that chatter.

2. Clinton Ekes Out A Narrow Victory

If Clinton isn't so lucky as to get a big win, a close one would still help silence some of the rhetoric that's been coming out of the Sanders campaign over the past several weeks. Despite the polls showing Sanders behind, and light-years from the kind of dominant lead he'd need to gain meaningful ground in the nominating race, the huge 546 delegate trove has been a sort of rhetorical deus ex machina for his campaign, an ever-present, theoretical game-changer.

Getting a victory of any measure to blunt Sanders' popular narrative about momentum, while putting any idea of an actually meaningful turnaround firmly in the rear view mirror, would still be a very solid development for Clinton.

3. Sanders Squeaks By With A Close Win

If you were to imagine a realistic scenario in which Sanders wins California, you'd probably guess that it wouldn't be a landslide — he'd have to outperform his polls just to tie with Clinton, so a lopsided victory would seem rather unlikely.

But if Sanders gets the tight win, even though it effectively doesn't improve his chances of winning the nomination one whit — a result close to 50-50 would mean a nearly equivalent delegate split, and he's down by 268 pledged delegates right now — it would allow him to make the same case he's been making. Namely, that the party clearly isn't entirely comfortable with Clinton as the nominee, and therefore perhaps the superdelegates should usurp her and make him the nominee.

4. Sanders Wins In A Blowout

Here's the Sanders campaign's moonshot — a blowout win in California that nobody sees coming, netting him a huge gain in the pledged delegate count (enough at least to sell the notion that he'd be a comeback threat if the primary process had gone on longer).

If Sanders can pull this off, it'll arguably be the biggest victory of his political life, and it'll allow him to credibly make the case that he's on an upward swing, right at the moment when Clinton should be hitting the jets as the presumptive nominee. There's a painful underlying reality for the Sanders folks here, however — even a landslide wouldn't necessarily be enough to breathe life into his campaign, as far as winning the nomination by traditional means goes.

He'd still be forced to rely on flipping superdelegates, though eating into Clinton's lead in the popular vote would definitely lend him some legitimacy to do so.

5. Donald J. Trump Wins In All Of The Above

Republican presidential nominee-in-waiting Donald J. Trump will win the California primary, and there's not a damn thing anybody can do about it. Sad!