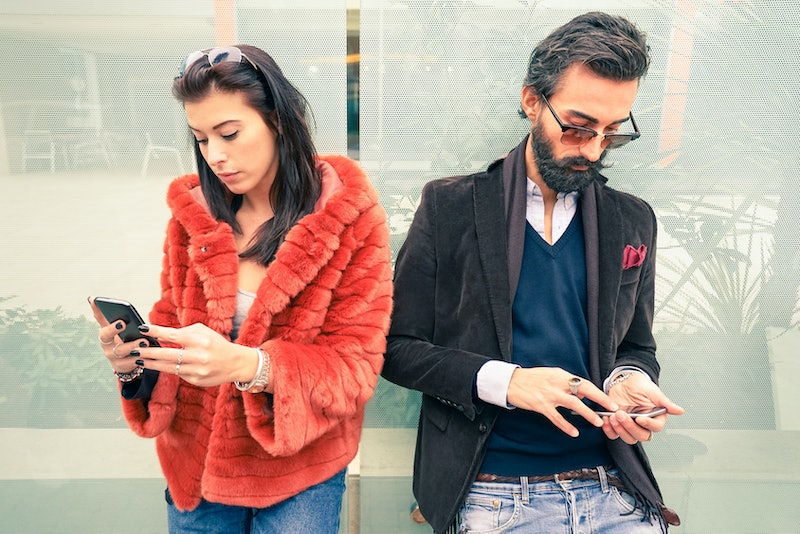 If you’re anything like me, you may have a love-hate relationship with social media. I love social media when it comes to keeping up with old friends. I hate how social media affects my love life. I have on occasion fallen into the nasty cycle of “checking out” a boyfriend’s Facebook page or the Instagram of a guy I’m dating. Yet, doing so never left me feeling all that great inside no matter how confident in the relationship I felt. I've since stopped that habit but there are so many ways social media can affect relationships. As a new study published in Computers in Human Behavior found, when people are constantly connected to their partners and have increased access to their lives online, they may be at risk for problematic digital dating behaviors.

Researchers from the University of Michigan studied 703 high school girls and boys between the ages of 14- and 18-years-old, and asked them about their current or most recent relationships. Overall, they found that social media use can create a “cycle of anxiety” in relationships, which in turn, can affect the mental health and security of romance.

Here are some important takeaways of the study:

1. Electronic Intrusion Is The Most Common Killer In Teenage Relationships

Though the study conducted was done on teenagers, I’m pretty sure many adults can be guilty of the same thing. The study defines electronic intrusion as “the use of social media to intrude into the into the privacy of a dating partner, monitor a partner's whereabouts and activities, and pressure a partner for constant contact.”

So, stalking your partner’s Facebook, Twitter, or Snapchat can cause relationship anxiety. But it can also alleviate anxiety when you find out that nothing’s wrong. Obviously, right? Then again, I’d have to argue that the paranoia will probably still be there.

4. Girls Considered Electronic Intrusion A Necessity To Maintaining A Relationship

As Lauren Reed, lead author of the study told Metro, some of the girls interviewed believed that many of their actions that fall under being electronically intrusive were “necessary components” in maintaining their relationships.

“For anxiously attached individuals, access to digital information about a dating partner coupled with the capability for constant contact may make it difficult to negotiate digital boundaries,” Reed said.

It was also found that girls spent more hours on social media than guys and reported to having higher levels of anxiety.

There’s no doubt, social media use can affect your relationship. But it really depends on how you use it. A 2015 report from the Pew Research Center found that teens view social media and texting as a space for “connection, emotional support, and occasional jealousy.”

Psychology Today even reported the benefits of social media use include making new relationships easily accessible since it allows you to easily integrate yourself into your partner’s social network and it can help you practice relationship maintenance techniques. Overall, those don’t sound too bad.