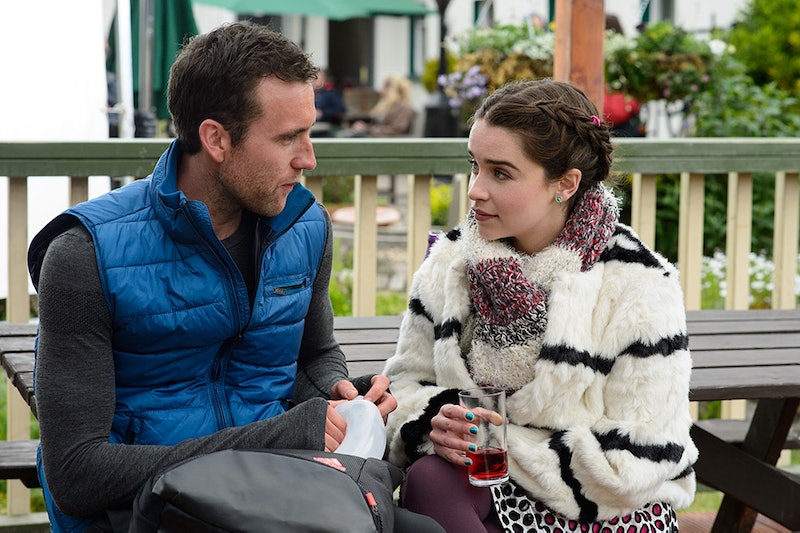 If you would think that acting alongside the woman responsible for the most badass character on TV's biggest show would be intimidating, well, you'd be right. As Matthew Lewis, who co-stars with Game of Thrones ' Emilia Clarke in the new film Me Before You , tells Bustle, being the scene partner for Daenerys Targaryen was no easy feat — although one he says he adjusted to fairly quickly.

"I remember when I first went in to do rehearsals, I was really nervous, actually, because I had not seen the show, but I had read all the books, and I knew how important her character was in Game of Thrones," Lewis tells Bustle. "I was just like, 'Oh god, I hope that I can bring something to the table, I hope I can try and match her.'"

Soon, however, Clarke managed to put Lewis — who laughingly adds that he quickly started watching GoT to catch up fast — and the rest of the cast at ease, the former Harry Potter star says. Adds the actor, "As soon as I got in the room, she was just so lovely, just so approachable, so easy to talk to."

In the new film, out June 3, Lewis plays Patrick, the well-meaning but oblivious boyfriend of Clarke's Louisa. The role marks the actor's first big post-Potter introduction to American audiences, so he would be forgiven for being a bit nervous about signing on. Yet he says that due to the "lovely" Clarke, it was impossible to be anything but comfortable on the Me Before You set.

"The whole environment of the set was set by her," Lewis explains. "It was just a really fun environment — we got to come in and play around and try things and do things, and it just felt really comfortable."

For a tearjerker that's being called the next Fault in Our Stars due to the tragic love story at its center, having a lighthearted set must have been pretty important. Lewis says that he, Clarke, and co-star Sam Claflin would often goof off during filming, pranking each other and "letting loose" whenever possible. Yet their fun antics couldn't totally hide the seriousness of the movie, which features the friendship, and later, relationship, between a bright-eyed caregiver (Clarke) and the cynical quadriplegic man she's hired to watch over (Claflin). Lewis admits that he cried when reading JoJo Moyes' novel, and then the author's script.

"I was in tears reading the book, trying most pathetically at being manly," Lewis says with a laugh. "And every time I tried, it was just flowing even more. And then I saw the film a couple months ago... it’s gonna be one of those films that definitely elicits an emotional response, which is brilliant."

Yet despite the story's innate sadness, Lewis' role is one mostly of comedic relief. The long-time boyfriend of Lou, Patrick is seen as first naive to, then wary of, the growing intimacy shared between Lou and Will, and Lewis plays the character's outrage perfectly. In taking on the role, the actor says that he was careful not to make Patrick a laughed-off villain, but a fully-formed character.

"I was never going to play him as being a jerk, because from my perspective, Patrick doesn’t think he’s a jerk," Lewis says. "He doesn’t know that he’s being an idiot and he’s being horrible to Lou — he thinks that everything he’s doing is probably fine and normal."

"It’s very easy to make it black and white, that Will’s brilliant and Patrick’s a bit of a jerk," the actor adds. "But I think we — Emilia and Jojo and I — wanted to make it a bit more of a grey area."

Anyone who's seen the movie can attest that they succeeded in doing just this; no part of the film, whether the men's personalities or Will's decisions regarding his care, are seen as simple or easily understood. Instead, the movie takes all of its subject matter seriously, something that's reflected in the layered, impressive performances of its cast, from Lewis to Clarke to everyone in-between.