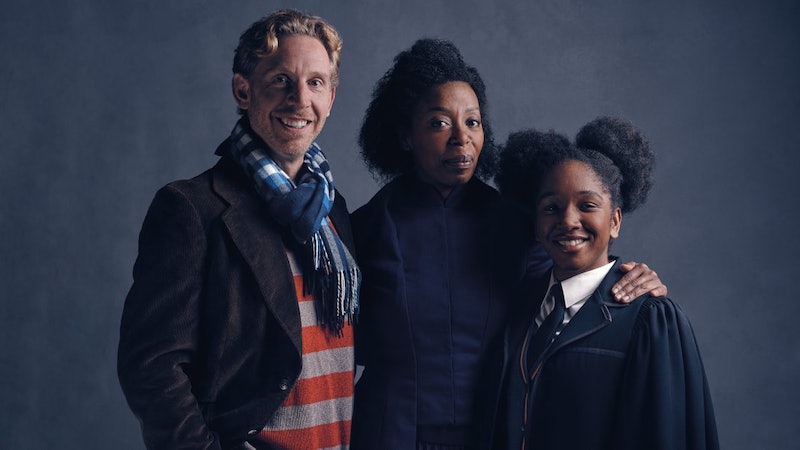 Yesterday we celebrated the first official pictures of the Harry Potter and the Cursed Child cast, and Potterhead gods are swiftly following it up with the release of cast photos Ron, Hermione, and Rose in Cursed Child . And although J.K. Rowling shook up the fandom a few years ago by backtracking and claiming that Hermione should have ended up with Harry, I've gotta say — despite everything, the trio looks pretty happy in these images. Ron and Rose are sporting some aggressively Weasley-esque grins, Hermione is looking sage but content, and the whole tone of it looks decidedly more cheerful than the round of images released of Harry, Ginny, and Albus Severus just yesterday.

Two things to note right off the top looking at these images: one, that Hugo Weasley-Granger is conspicuously absent, which seems to confirm that the play will focus mainly on the kids that are in the same year as its lead Albus Severus (cast photos of Scorpius Malfoy to come, maybe??). Two, our friend Rose? Is decidedly not a Ravenclaw. Rumors have spread since Ron's offhand comment on the train ("Thank god you inherited your mother's brains") that Rose would be a Ravenclaw, but unlike Albus Severus, her robes are lined with yellow — which points to either Gryffindor or Hufflepuff. In any case, it certainly confirms my suspicion that Albus Severus's robes might be a major spoiler for the play.

Grown up Hermione is, unsurprisingly, still a force to be reckoned with. Noma Dumezweni perfectly captures our no-nonsense, passionate heroine, even ~all grown up~ in her ministry robes.

... And Ron (played by Paul Thornley) is 100 percent wearing a Molly Weasley sweater if there ever were one, and clearly still supporting the Chudley Cannons.

Perhaps most exciting, though, are images of Cherrelle Skeete, bringing Rose Weasley-Granger to life on the stage. And judging by this image of her that somehow perfectly encapsulates all of the Weasley charm and the Granger nerve, she's got this on lock.

"I can’t think about how big it is or I’ll just faint," said Cherelle on Pottermore. "Putting on my uniform, ready to go to Hogwarts, and seeing everyone else in their uniform was exciting. I’ve been looking at it every day in the wardrobe department, waiting for the day I can get on the Hogwarts Express."

To learn more about the play, check out the Harry Potter and the Cursed Child's official website.

More like this
The 'Hocus Pocus' Sequel Finally Has A Release Date & It Makes Total Sense
By Shannon Barbour and Radhika Menon
At 14, Jenny Han Wrote Rom-Coms About Her Friends & Fan Mail To Leo DiCaprio
By Alyssa Lapid
Lauren Rae Is Bringing Back The Sex And The City Vibes In Her New Memoir
By Shahed Ezaydi
The 'Jurassic Park' Cast, Then & Now
By Arya Roshanian
Get Even More From Bustle — Sign Up For The Newsletter