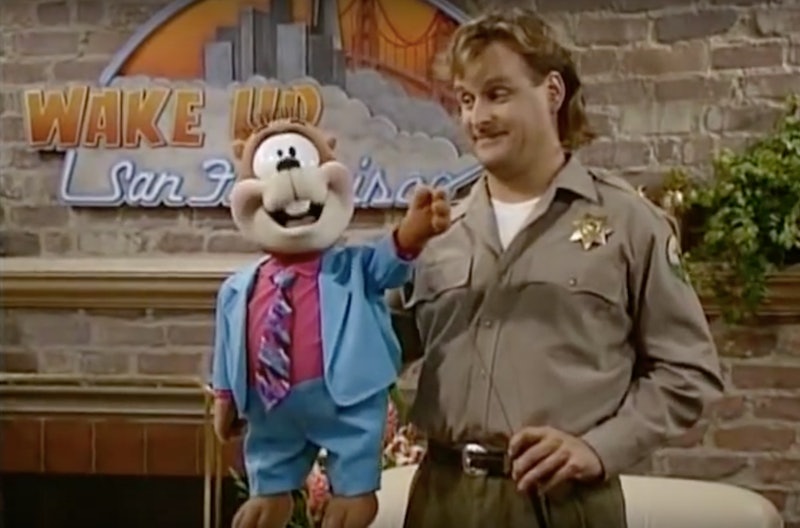 Uncle Joey is sort of an uncle to all of us. And I mean that in the least creepy way possible. For eight glorious years in the late '80s to early '90s, Full House's Joey was the goofy, fun-loving uncle we never had. (And, even if you did, can you really have too many goofy, fun uncles? Didn’t think so.) Dave Coulier's character had exactly what it takes to make even the most cold-hearted of humans crack a smile — he was just that good. Part of his endearing appeal is that he knew how hilarious he was, reminding those who laughed at his jokes to "Cut it out,” providing one of the best TV catchphrases ever.

Besides being absolutely hilarious, Joey carved a soft spot in all of our hearts for being the sweetest and the most loyal friend, brother, and uncle. With Season 2 of Fuller House on the way, I can only hope that Uncle J. makes just as many (if not more) cameos as he had in Season 1. Until then, these quotes from America’s favorite uncle will not fail in brightening your day and making you smile. And if you ever find yourself with a frown: cut it out.

1. "Cereal, Pajamas, Cartoons. This Is Why God Invented Saturday Mornings."

He delivered possibly the truest statement ever made.

2. "Suppose The Pilgrims Had Landed In Florida. We'd All Be Eating Flamingo."

One time, he made this observation about Thanksgiving, making us even more grateful for all the turkey.

3. "Look At This, Michelle. 'Psychic Hit By Lightning.' Boy, If He Was Any Good, He Would Have Seen That Coming!"

Tell me this isn't the best joke you've heard all your life.

This is how he superbly made fun of Jesse's awkward stage.

Because wouldn't that be the absolute worst?

6. "She Was Choking On A Bad Piece Of Cheese, So I Gave Her The Hoover Maneuver And Sucked It Out Of Her."

This was his totally slick way of explaining why he kissed someone, and I'm definitely going to use it one day.

7. "We're Leaving, But It's Not Because We're Scared. Because I Can't Pull My Pants Up Any Higher. Let's Go, Girls."

Once, he showed the mall security guard who was boss and was therefore was the best role model for his nieces and us all.

8. "You Know Kimmy, Some Day You're Gonna Make Some Young Man Very... Confused."

He didn't sugarcoat the wackiness of crazy neighbor Kimmy.

9. "Listen Up Human Dictionary! Stephanie Tanner Is Going To Tear You From Vowel To Vowel And Eat Your Consonants For Lunch! Grrr!"

He took personification to a whole new level.

10. "I Guess When You're An Awesome Physical Specimen Like My Own Bad Self, Germs Take One Look At My Body And Say, 'Hey, Why Waste Our Time?'"

Then, there was the time he handled the chicken pox (and not getting them) like a total boss.

11. "Nice Sentiment, Steph, I Think You Ought To Phone That One In To Hallmark."

The time Steph pointed out that you can return Christmas presents for cash, Uncle J. served her some sarcasm with a small side of hope.

When D.J. points out that Stephanie and Michelle are the same ages she and Stephanie were when they shared a room, he made this glistening comparison.

Did we forget he was the one who originally defined what it meant to be hangry?

Of course, he created the most epic insult of all-time while getting this joke-stealer in line.

If you're not smiling yet, then you clearly need to re-watch Full House right now. Uncle Joey's jokes are always better when he explains them.