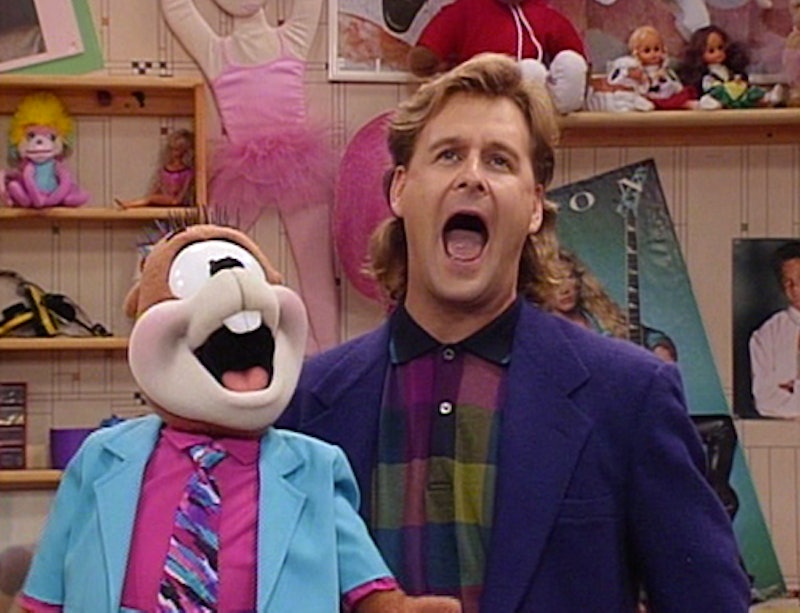 When we take a casual stroll through our Full House memories, especially the ones we have of the show's trio of dads, it tends to go a little something like this: Uncle Jesse was the hot one, Danny was the sweet one, and Joey? Joey was the funny one. His humor was a bit over the top in the best kind of way, and there was just something special about the way Dave Coulier delivered his classic one-liner — "Cut it out!" — that still makes me giggle. Whether he was working with his puppet, donning his Ranger Rick outfit, or just being silly with Michelle, Stephanie, and D.J., Joey was always the most hilarious adult in the house.

Joey is to blame for a legion of '90s kids entertaining their parents with Popeye impersonations, and believing said impersonations could get them on Star Search. Joey Gladstone was the underdog: he was a sweet guy who moved into his best friend's alcove (and later basement) to help raise three kids. Granted, back then, he did not seem nearly as crushworthy as Uncle Jesse, but Joey's bright outlook on life has endured just as well as John Stamos' lovely locks.

There are so many memorable Joey moments from Full House it is hard to narrow the list down to just nine, but I stand by these as the funniest Joey moments of them all.

Joey Turns The Wizard of Oz Into a One Man Show

Joey was always great at impressions, but when he singlehandedly reenacted all of The Wizard of Oz (with weird props like Abraham Lincoln's head), it turned into a classic and wonderfully silly Full House scene.

Of course Joey was an April Fools' Day master. After spending most of the Season 7 episode, "Love on the Rocks," pranking the family, Jesse and the rest of the gang planned an elaborate trick to make Joey believe he had won the lottery. Joey being Joey was way ahead of them, and ready to outprank his family like a pro.

Joey and Jesse were always a funny duo, but they outdid themselves the first time they changed Michelle's diaper. Joey just barely edged Jesse out in terms of laughs thanks to the moment when his quick thinking led him to preserve Michelle's used diaper in Tupperware.

Joey Ends Up on Star Search

Joey ending up on Star Search was a huge deal because Star Search was the business back in the day. Even better? His routine about surfers playing ice hockey was not just funny, it was clever.

I know I am an adult, but Mr. Woodchuck is still my favorite. Joey's wood obsessed puppet went off the rails during a retelling of "The Three Billy Goats Gruff," leading to a sweet, giggle-inducing scene with Nicky and Alex.

Joey Gets Stuck in a Counter

Hey, Joey was not a one trick pony. Yes, he specialized in impressions and jokes, but he was great at physical comedy as well. I dare you to say you didn't laugh when he gave Jesse a tongue high five after getting his head stuck in a dirty bar counter.

Anytime He Did Silly Voices

Joey's ability to mimic anyone made him the reigning king of Tanner family comedy. One of his best impressions wasn't an impression at all though — it was giving voice to baby Michelle way back in Season 1.

The most cheesetastic and enduring catchphrase of them all. All hail, Joey!