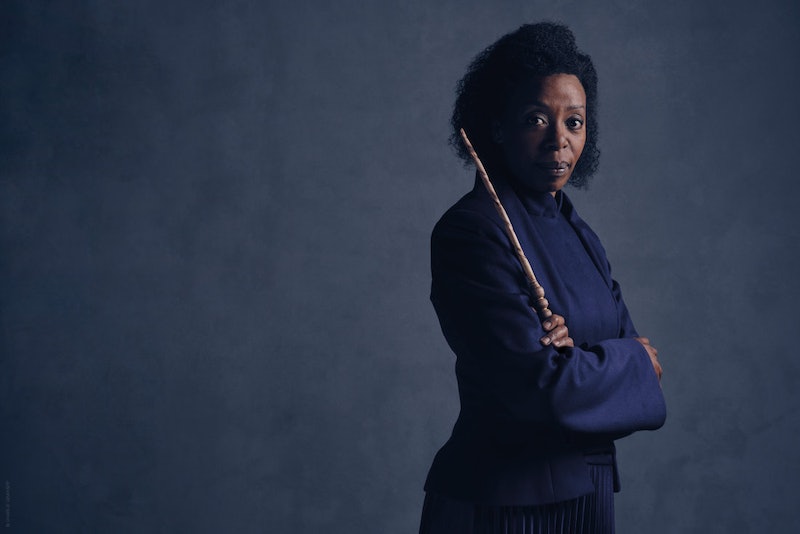 If you're busy freaking out over the cast photos of Ron, Hermione, and Rose from Harry Potter and the Cursed Child , you are far from alone on this #blessed day. Our old heroes are everything we hoped that they'd be 19 years post-Hogwarts. Ron still has his very Weasley-esque grin and absolute disregard for fashion. Hermione is still wears the veritable badassery of being the brightest witch of her age with pride. Their daughter Rose Granger-Weasley seems to have inherited the best of both of them, and looks adorably excited for her adventures at Hogwarts to begin. I know that J.K. Rowling revealed that the play was going to be tearjerker, but this family seems to be all smiles, at least for now.

Of course, this is all that you can glean just from a first glance — it's going to take some Potterhead sleuthing to figure out possible plot hints based on these images, and thankfully, there are more than enough of us up to the task. For the sake of being extra thorough, I'm going to break down each of these images one by one and examine exactly what they reveal about each represented member of the Granger-Weasley clan (sorry, Hugo — they'll catch ya next time?).

Ron, portrayed by Paul Thornley, is still every bit as adorkable as he was in his school days. By the time the play starts, he will have trained as an Auror, worked with Harry for several years, and left to help co-manage the joke shop with his brother George. The only assumptions I can gather from his getup are that Molly Weasley is definitely still knitting his clothes, and his insistence on wearing orange can only stem back to his continued support for the Chudley Cannons (despite his sister's run on the Holyhead Harpies).

What this photo subtly reveals, though, is that Ron may have been able to move on from the tragic events at the Battle of Hogwarts more effectively than Harry. Although it was a traumatic experience for all of them, Harry's photo seems altogether more haunted than Ron's, where he is depicted in an almost comical fashion, with his mismatching clothes. I sense that Ron was able to recognize that becoming an Auror might be too much like living in the past for him, and found some solace working in the joke shop with George that helped him recreate his identity beyond what happened. I see a lot more of the fun-loving first year Ron than the occasionally #rude and indignant Ron from his later school years.

Hermione, portrayed by Noma Dumezweni, is every bit as no-nonsense as she was in school 19 years later, but still manages even at her most professional to shine with her inherent enthusiasm. At the time of the play, Hermione will have made major strides in S.P.E.W., and will be working in the Ministry of Magic as the Deputy Head of the Department of Magical Law Enforcement. The formality of attire emphasizes the importance of her position, especially when you consider how eccentrically most of the employees at the Ministry of Magic dress.

The most remarkable thing about this photo, though, is that we finally see a Hermione who is at ease in the Wizarding World where she was always made to feel like she didn't quite belong. This isn't the school girl who was constantly and almost desperately outperforming everyone to prove that she deserved to be there — this is the full grown woman who has come into her own, and is doing everything she can to make sure no other generation of Muggleborn or non-pureblood wizards and witches have to endure what she did.

Can we talk about how precious Cherrelle Skeete's portrayal of Rose Granger-Weasley is? Because we're going to talk about it. "Rose is like her mother, but more secure, more grounded," said Rowling of the character. "She was born to wizards and knows her place in the world. Cherrelle plays her perfectly: bossy but deeply lovable."

If you weren't so smitten by the very Weasley-esque smile (I suspect this girl inherited some Fred and George genes, and I am here for it), you might squint and notice a possible spoiler in this image: Rose seems to have a yellow seam under her robes, indicating that she is either a Gryffindor or a Hufflepuff. I'd personally be a bit surprised if she were a Hufflepuff, considering her lineage and considering that Skeete has described her as "quite similar" to Hermione, but hey, you never know! It definitely seems, though, between the pigtails and the broad smile, that of the kids featured in the play, she's going to be the most fun-loving one.

Freaking out for two reasons: one, they are precious. And two: LOVE the hyphenated last name. It seems very fitting that Hermione would either insist on that, or that Ron would know she'd prefer it before she even had to. I also just love the idea of every teacher at Hogwarts getting "Granger-Weasley" on their roster, remembering how often the two of them bickered in school, and affectionately rolling their eyes. I have so many adorable head canons that I am making myself all warm and fuzzy inside. GO TEAM GRANGER-WEASLEY.

For more information about Harry Potter and the Cursed Child, visit the official site here.