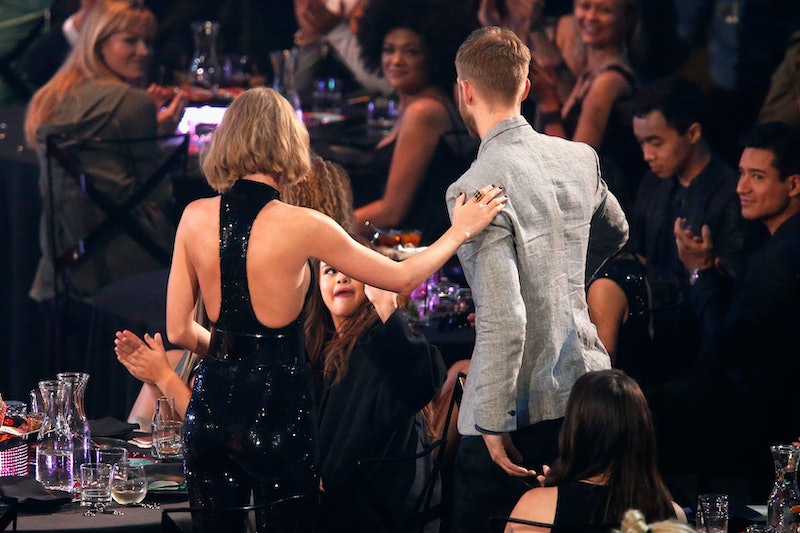 It’s always devastating when two people break up. But when those two people are people that you’ve watched celebrate and showcase their love over the past year, it’s even more difficult to make sense of. Case-in-point: When I heard that Taylor Swift and Calvin Harris had reportedly broken up, my first thought was of all the incredible times that these two have shared, because before rumors of any breakup, there were so many amazing photos of Swift and Harris in happier times. So many, in fact, that their rumored breakup seemed sort of unbelievable to me (Bustle did reach out to a representative for both Swift and Harris in response to these rumors, but has not heard back yet). How could a couple that had just recently celebrated their one-year anniversary with an exchange of gifts and a tropical vacation be facing breakup rumors?

It’s sad news all around, and one that's going to take a while and a lot of Swift tunes to cope with — for both the once-happy couple and for fans who have been celebrating their love right alongside them. So let’s take a few minutes to revisit all of the happier times that these two shared before the reported end of their .

1. That Time He Supported Her At The Grammys

2. That Time They Celebrated Their One-Year Anniversary

With a tropical vacation, no less.

3. That Time He Couldn't Take His Eyes Off Her

Isn't this what everyone wants?

4. That Time They Built A Snowman

And were super proud of themselves.

5. Every Time They Were Spotted Out In New York

And the Internet went crazy for it.

7. That Time They Dodged The Paparazzi

They got really good at it after a year of dating.

8. That Time They Were On A Boat

With their super famous friends. NBD.

9. That Time They Were Beach Babes

These two looked ready for the Baywatch revival.

10. That Time He Bragged About What An Awesome Girlfriend She Was

So sweet, these two.

11. That Time They Rode A Swan

How they kept a straight face during this is beyond me.

Didn’t that help ease the sting of this rumored breakup a bit? It’s always nice to be reminded of when things were good.