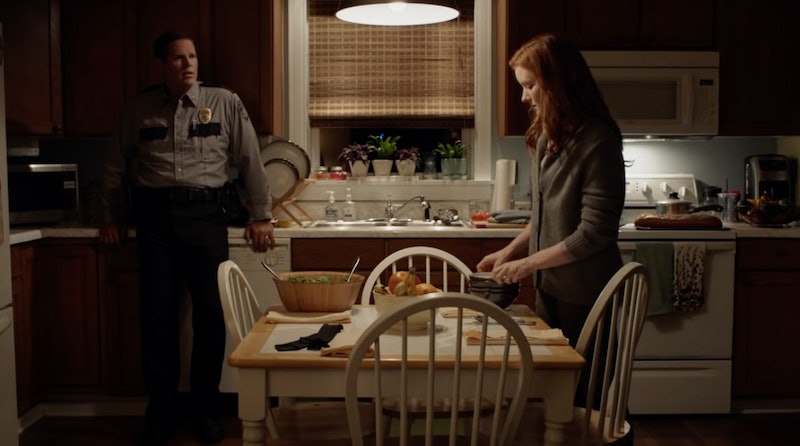 Outcast is a new show created by a man, starring a man, and it has a male show runner. Ironically, though, themes surrounding females are at the show's core. Robert Kirkman, the creator of The Walking Dead, is once again bringing his talents to the small screen with the new Cinemax show which delves into the world of demonic possession and exorcism. Kirkman’s fellow executive producer is Chris Black (Star Trek: Next Generation) and the show leads are Patrick Fugit, Philip Glenister and Reg E. Cathey. However, Black says this project is “the first show [he’s] ever been on that was actually weighted towards women.” Bustle caught up with the men of the show and its female stars, Wrenn Schmidt and Kate Lyn Sheil, just before the show’s premiere to learn how and why women are running the show just as much as the men are.

For Schmidt, working with a male-dominated cast is nothing new (you may recognize her from Boardwalk Empire and Preservation). The actress doesn’t breeze by the fact that many Hollywood projects still have men calling the shots and taking over on set. “I don’t mean to bash television in general, because I feel like there’s so many good things happening,” she says. “I just feel like my experience has been that I’ve come across it more in TV than in theater. In theater, I feel that less.” Schmidt plays Megan, Kyle’s (Fugit) strong-willed foster sister, while Lyn plays Allison, Kyle’s wife. She and Sheil admit that the camaraderie they have on set with each other, having the support and interaction with a fellow female, is refreshing.

“It’s really great, I feel like it’s rare that you get to work with other women,” says Schmidt. “It’s great that Kate and I had scenes together, which was really, really refreshing and exciting.” Sheil agrees, saying, “It’s nice to have other women around. It means only good things. It means that there are more female characters, more female voices, more female perspectives.”

Still, having so many males on set doesn’t seem frustrating or intimidating to them. “Intimidating isn’t the word that I would use,” says Schmidt. “I would just say it’s nice.” There are also females working hard behind the scenes that don't see. “We actually have some really fantastic [female] producers on our show,” she says. “They may not be the show runner or the creator, but they’re fantastic.” Sheil explains how influential these producers are: “[They’re] very much helming the show in certain ways, very much present during the filming process.”

And this helped. Sheil calls working with this cast and crew a “pleasure,” explaining how “they crafted [the writing] to three very strong and complicated female characters” as well the joy she had having Schmidt and other females, like cast member Julia Crockett, on set. Unfortunately, though, this isn’t always the case. Schmidt explains the frustration she’s felt when female characters are merely props to support their male counterparts. “There’s a moment where you say something to a writer about a moment in a scene and they’re like, ‘Oh well, you say that so he can say this,’” she says, with Sheil agreeing. But this wasn’t the case for Outcast. Schmidt explains how figuring out how her character fit into this story was different from what she’d experienced in the past:

What’s really beautifully done on this show, and there’s more and more of that in television now anyways, which is great, is that these female characters exist independently of the male characters. I mean, everyone’s woven in together in a really wonderful way, but I don’t ever feel like Allison or Megan are serving another character’s story line. Which is really wonderful and it’s unfortunately uncommon.

Fugit also makes an excellent observation, pointing out that the prominent themes in Kyle’s life are “largely feminine.” “From what we know about Kyle, his father wasn’t around when he was a kid, he has a single mother influence, which is an important thing to know about him,” says the 33-year-old actor. “Throughout his adult life, the main, positive influences have been female.” He then goes on to applaud Schmidt and Sheil's strong characters.

“Wrenn plays a woman who’s been through quite a lot and has a lot of armor and is a pretty strong person. [She] is somebody who understands Kyle and looks out for him… she holds her belief in him throughout all of this darkness.” The same holds for Sheil's character. “Allison is probably the only person outside of Megan that really understands Kyle and sees the goodness in him and sees how bright he can be,” says Fugit, “What he has to offer particularly to a partnership and being a father.”

Fugit explains how he and Schmidt organically built a rapport when they auditioned for another series together about eight months ago in a rigorous process (and neither got the parts). “With the other actors, you usually form a good bond. So we already had that,” he says of the process. “Wrenn is great, she’s just naturally charismatic.” In addition to his real-life charisma with his co-worker, the actor explains how his family and upbringing influences how he looks at the project’s female themes and Kyle’s relationships. “I have a really great relationship with my own sister,” he explains. “You get to put a lot of themes from having a really cool set of siblings back home in my real life, things that are uniquely brother-sister that we infused in there.”

But back to Black’s statement, how is this show actually so strongly “weighted towards women”? “I dispute that it is a male-dominated process,” he says. “We’re 50/50 male-female on producers.” There are even more females than males in the writer’s room. “Phil and Patrick are obviously the leads in the show, but we have wonderful [actresses]. It’s important to us that we have a balance,” he explains. “We’re trying to tell the story from all perspectives. Even though we are actually men and it’s the voice we know.”

Fugit isn’t the only male on set who takes so much inspiration from the females in his life. “There was a scene where Megan and her husband Mark were fighting, where I pulled some dialogue word-for-word from a fight I had with my wife,” says Black. Kirkman does the same. “There’s certainly relationships with my sister, my mother, wife, my daughter, all kinds of different things that I draw inspiration from so I don’t sound like a complete knucklehead,” he says.

The reasons so many women love and appreciate The Walking Dead are the reasons they’ll feel the same about Outcast. “We’re just trying to accurately portray the world,” Kirkman says. “It is a problem that a lot of male writers don’t necessarily see that perspective much, but we do go to great lengths to try and make sure that we are showing an even balance and making sure that the story is centered around both male and female characters, that’s something I try to do it all my work.”

So don’t be fooled by the solo man on the gritty and somewhat terrifying show poster or consistent presence of the town sherif and reverend. The females in this cast and crew shine, and the males alongside them are their best cheerleaders in the process.