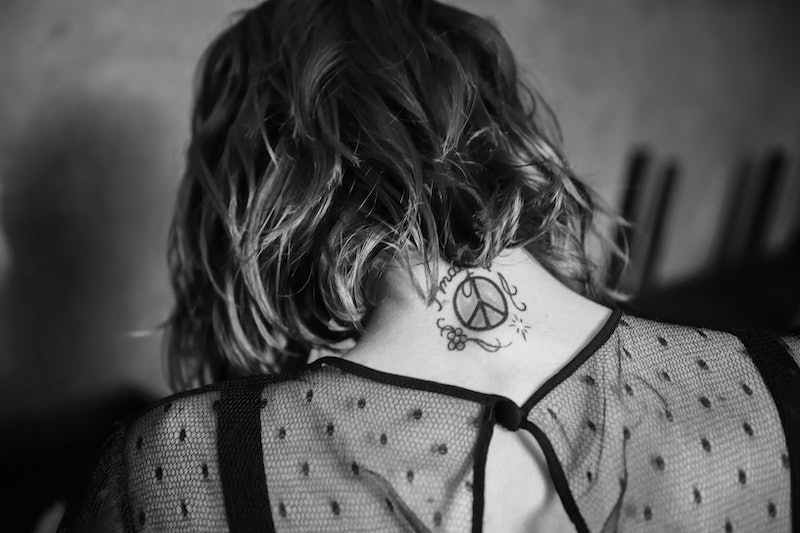 Tattoos are not a decision to be taken lightly, not only because they're stuck on your body for literally ever (save, if you splurge and grit your teeth through a tattoo removal), but also because the effects of not taking proper care of a tattoo can have serious ramifications, leading to these six signs your tattoo isn't healing correctly.

Mario Barth, CEO and President of King Ink and Starlight Tattoo (his wrap report includes celebrities like Lenny Kravitz, Usher and many others), and Paul Timman of Sunset Strip Tattoos (who has also blessed Mark Wahlberg, Nicholas Cage, Pamela Anderson and many other celeb skin) talked me through the signs a tattoo isn't healing properly and what to do so the open wound can begin to heal. Brace yourselves — some of the signs do deal with puss and bodily fluids exiting your body.

Timman says a tattoo is comparable to an open wound. And clients should care for a tattoo as if it were a skinned knee. If you wouldn't rub dirt in, press your fingers against or introduce a bleeding, opened knee to harmful environments, don't disclose your fresh ink to your fingers, dirt or a chlorine pool either. In fact, at Starlight Tattoo Studio and King Inc. Tattoos, Barth goes the extra step to put skin bandages on the fresh wound to prevent germs from coming in.

If you are unsure about your new ink, take a look and see if you are experiencing any of the signs a tattoo is not healing correctly. If you are, make sure you see your tattoo artist or doctor to assess the severity of the situation.

1. Major Redness Around It After a Few Days

Of course, getting a tattoo irritates the skin. But if the redness lasts for days after you received the tattoo, Timman says this is the first sign a tattoo is not healing properly.

To avoid getting to multiple days of redness, Timman recommends rubbing a light, non-scented lotion, like Neosporin, on the open wound very sparingly — three to five times a day to begin, then wean yourself off the lotion. Barth recommends simple soap and warm water, then a light pat dry.

2. Heat Coming Off The Tattoo

If there is heat coming off any part of your skin, go see someone. But Timman says this will likely be a counterpart to the redness that won't go away.

3. Fluid Coming from the Tattoo

Timman, and common sense, says any fluid emitting from the tattoo, or its surrounding area, is a surefire sign you have an infection. And at this point, it's too late to see a tattoo artist. Instead, he encourages those with oozing wounds to head straight to a doctor's office.

In order to avoid any oozing liquids altogether, Timman guides his clients to avoid touching their tattoos. If they must touch the freshly-inked skin, try touching around the affected area. Touching a tattoo, which is essentially an open wound, introduces it to germs. Timman says much like you wouldn't touch a scraped knee, don't touch a fresh tattoo.

While a scab itself is not a sign of an infected tattoo, Timman recommends watching the scab for the next few days. You want to note any signs of fluidity or discoloration.

These are not the typical colors of your skin, and Barth says they can be an early sign of an oncoming infection.

Barth explains the tattoo itself may be raised for a couple of days, but if the area surrounding the ink is also puffy and lasts for multiple days after getting the tattoo, it could be a sign of an infection.

Barth and Timman see both ends of the spectrum — some clients over-research tattoo studios, to the point where he or she deems nowhere safe to get permanently inked. Other clients don't do any research at all and put themselves at a risk of getting infected, due to a poor tattoo environment.

Both the artist and the client have equal parts in ensuring a tattoo is kept safe from infection. The tattooer must use proper equipment and practice care while giving the tattoo. And the client must choose a clean studio and follow the tattooist instructions in order to prevent puffiness, scabs or oozing liquids.

If you notice mild symptoms, such as puffy skin or discoloration, first talk to your artist and see if they have suggestions on how to best remedy the problem. Barth says to never be afraid to call the studio and ask questions. But if the new tattoo is oozing or scabbing, Barth and Timman agree a doctor would know best how to disinfect the area.

"The best thing I can say is do your research. Spend a little bit of time to research the artist and healing the tattoo properly and getting the tattoo done in a proper studio and if you take care of it, you’re going to basically enjoy it for the rest of your life. Just take a little bit of time to do the homework and you’ll be happy," says Timman.