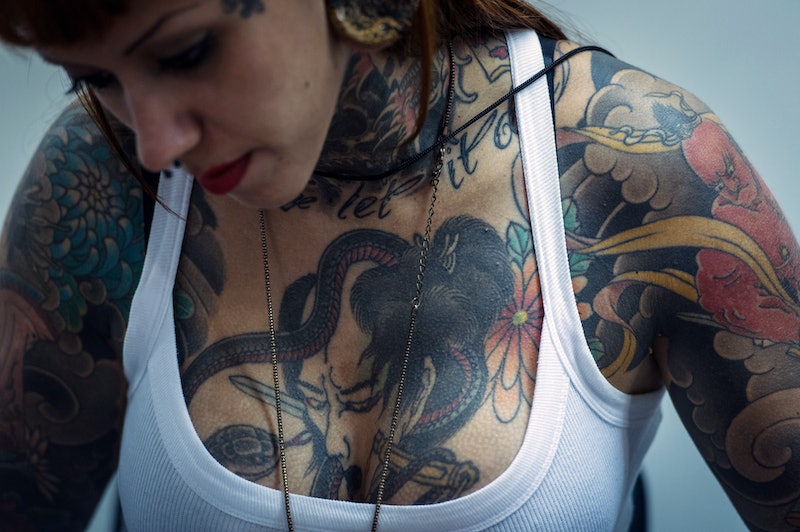 The next time someone implies that you have too many tattoos, instead of getting annoyed at them (because seriously, your ink is not their business), just content yourself with knowing that you're probably sick a lot less often. Based on recent research, it turns out having multiple tattoos might be good for your immune system. In other words, getting inked might actually be good for you. Who'd have thought?

According to a study conducted at the University of Alabama, people with multiple tattoos might be better at fighting off one of the most difficult-to-prevent illnesses known to modern medicine: The common cold. Researchers went to local tattoo parlors to find potential participants for the study, and asked volunteers about the number of tattoos they have and the amount of time spent applying each one. Participants then gave a saliva sample both before and after receiving a new tattoos, which researchers analyzed for the antibody immonoglobulin A, which helps fight common infections such as the common cold, and cortisol, a stress hormone that can interfere with immune system response.

The researchers found that after receiving a new tattoo, levels of immunoglobulin A decrease, presumably as the body uses up antibodies fighting possible infection at the tattoo site. However, this drop was less pronounced the more tattoos a person already had. People getting their first tattoo saw a large decreased. People who already have a handful under their belt, not so much.

The researchers theorize that getting tattoos helps the body build up a new, higher threshold for the immune system.

“After the stress response, your body returns to an equilibrium,” said Christopher Lynn, an associate professor of anthropology, who led the research. “However, if you continue to stress your body over and over again, instead of returning to the same set point, it adjusts its internal set points and moves higher.”

It's roughly the same principle that makes you stronger the more you go to the gym, researchers explained. Working out might tired you out, but the more you do it, the stronger your body gets and the more resistant you become to getting tired out in general. Getting a tattoo might increase your short term risk of getting sick because your immune system is already working hard fighting any possible infection, but afterwards, your immune system is better at fighting off common ailments than before the tattoo.

Of course, this is all far from conclusive; the study only involved 29 participants, and although its findings do potentially support the idea that getting tattoos strengthens the immune system, that idea would need further testing before anyone can say for sure. As the researchers themselves note, there are other possible explanations, including the idea that people with healthy immune systems are perhaps more likely to get multiple tattoos.

Basically, don't go getting a tattoo just because you think it'll help protect you from the common cold. But if you do want to use this research to shut up your disapproving relatives or obnoxious dates, feel free. After all, if someone looks down on tattoos, telling them that tattoos actually make you healthier is bound to confuse them in potentially very amusing ways.