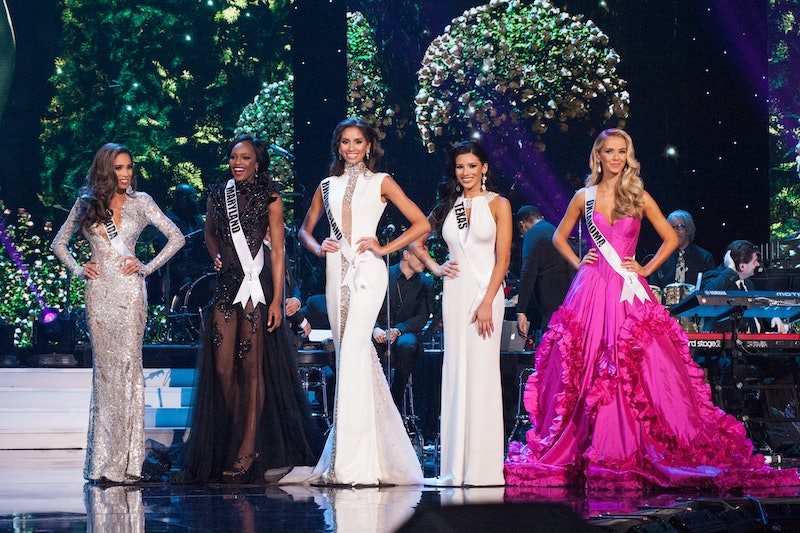 It’s that time of year again, folks — the birds are chirping, the air is heating up, and the Miss USA pageant is getting ready to crown its newest winner (sorry, current title holder Olivia Jordan — your time is up). It’s the normal pageant to-do — gowns, swimsuits, question and answer, but what’s a girl to do if she wants to watch the festivities without a television? There are a few options to stream Miss USA 2016 online, though it won't be the same as watching the pageant when it airs on FOX at 7 p.m. ET.

Let’s talk a little bit about the show itself. This year, it will be hosted by Julianne Hough and Terrence Jenkins, and Sports Illustrated cover girl Ashley Graham will be reporting live on what's going on backstage. There are always musical performances, and this year, that requirement will be filled by country singer Chris Young and the Backstreet Boys (I promise it’s not 2001 right now). Judges will include model and actress Ali Landry (who won the Miss USA crown herself in 1996), former Miss USA Crystle Stewart, Laura Brown of Harper’s Bazaar, and Joe Zee of Yahoo! Fashion. That’s a stacked lineup bound to create even more must-see moments.

Luckily, Miss USA makes it easy to watch those moments — at least those that occur at the beginning stages of the competition. On June 1, it streamed the preliminary stages of the show online and you didn't even need a cable provider login to watch. A panel of judges scored all of the 52 women ahead of time on the swimsuit and evening gown competitions, choosing the top 15 ahead of time, who will be announced during Sunday's live broadcast.

However, when it comes to the big live show, it’s not quite as easy to stream. FOX is only airing the pageant itself on television, so you'll just have to hang out with a friend who is happy to pay for cable. You can, however, stream the 2016 Miss USA red carpet (with BuzzFeed's The Try Guys, Ned Fulmer and Keith Habersberger) on the Miss U app, YouTube channel, and Facebook page beginning at 5:45 p.m. ET Sunday, and there will also be a live feed from backstage following the competition. It will be a great way to get the scoop on the new winner and runners-up, even if you weren't able to see them actually compete.

Have you ever wondered how the Miss USA pageant ever came to be? According to the pageant’s website, it began in 1952 as a local “bathing beauty” swimsuit competition in Long Beach, California. Then sponsored by Catalina Swimwear, the show has evolved over the last 60 years into an international brand and a year-round organization. Pageants like Miss USA and Miss Universe are often unfairly judged, but throughout the organization's history it has provided opportunities for the ambitious women who work hard to land a spot on its stages. And whether watching on TV or catching the red carpet and post-show live streams, that should be reason enough to tune in for Miss USA on Sunday night.