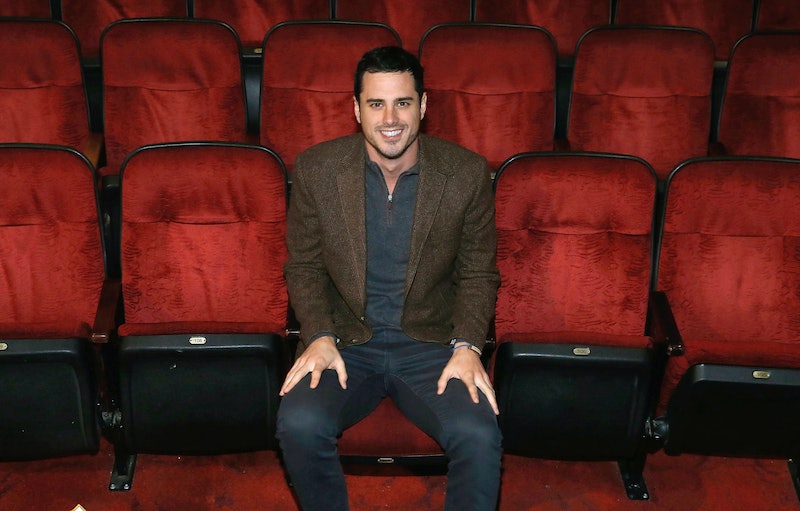 Are you ready to hear something that will make total sense, even if you've never independently considered it on your own? Ben Higgins is considering a run for office. I don't know about you, but when I heard that, something clicked into place my brain, and I was like, "Of course he is." And how did I not think of this before? Granted, I probably wouldn't have gotten the exact details right — Higgins apparently has his eye on a seat in Colorado's House of Representatives, representing House District 4 — but, if I'd put my mind to it, I feel like I could have predicted a move like this. It makes so much sense.

Ben doesn't have any political experience that I know of up to this point, but he does have a whole host of credentials from his time on The Bachelorette and The Bachelor that I actually think will be super helpful in everything from campaigning to actually holding office, should he be elected. Just think about it. Ben H. came to prominence on two reality shows that are designed to test his ability to perform under pressure.

In one of them, The Bachelorette, he competed against 25 other men to win the heart of Kaitlyn Bristowe, all while cameras rolled; what better way is there to train for the rigors of the campaign? You need to be competitive without stooping to smear tactics, a skill which Ben displayed perfectly when Nick Viall was added to the show. Heck, that was a moment when many of the other men stumbled, including the eventual winner, Shawn Booth. And speaking of Shawn, did you know that he and Ben are still friends, post-show? Ben didn't let the fact that Shawn won and he lost get in the way of their friendship, which shows me that he's able to keep his ego in check and could never be a sore loser. If he behaved exactly the same way during a run for office, I think it would really benefit him.

And then, on his own season of The Bachelor, when he was the one with the power, Ben showed that he wasn't prone to abuse of that power by really taking the women's feelings into account. They were all in a unique, impossible situation that required a lot of diplomacy and clear-headedness to navigate successfully. Which, again, he did. Lest we forget, Ben came out on the other side of The Bachelor with a fiancée, Lauren Bushnell. And even the mistakes he made along the way — like telling JoJo Fletcher he loved her mere days before breaking her heart — he owned up to. And that's all we can really ask for in an elected official, right? Nobody's perfect, but as long as you're able to take responsibility for your mistakes and find a way to move forward, you're in a pretty good position. Since Ben honed his skills in that department on national television, I have a feeling he's up to the challenge of the Colorado House of Representatives.

Which is a good thing, because it sounds like it might be his for the taking. The seat is currently occupied by Democrat Dan Pabon, and the Republican who's been nominated to run against Pabon, Willie Pinkston, has already publicly voiced his support for Ben Higgins. According to him, he "definitely plan[s] on stepping aside" if and when the former Bachelor decides to run. For his part, Ben has this to say to the Colorado Independent about the possibility of politics in his future:

Whatever lies ahead, love, grace, and hope are ideals that guide my life. I will take them with me into my next adventure. Lauren and I aren’t sure yet what that will be, but in terms of representing House District 4, Willie Pinkston is an amazing person and any decision I make regarding entering the race will be based on what is best for Willie, his family and for Lauren and me.

No matter what he decides to do, I'm confident that Ben has better training than many to enter the world of politics; I'm just surprised a former Bachelor or Bachelorette hasn't made the transition sooner. It's not the craziest idea in the world.