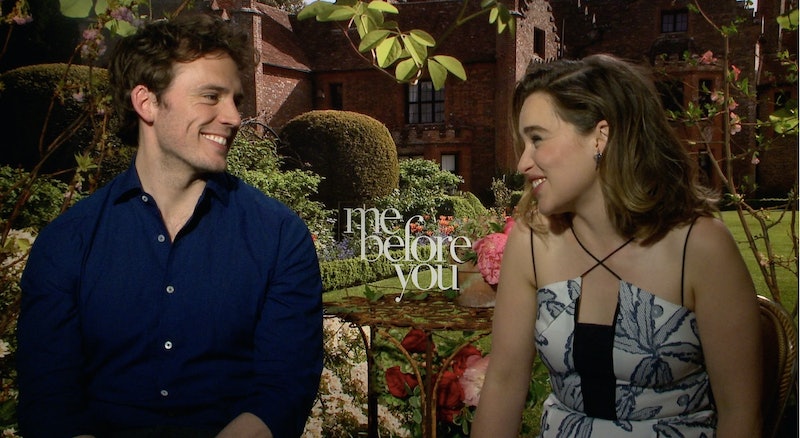 For some actors, appearing in a major movie or television show can limit a career. They can be pigeonholed by both viewers and directors as only being able to do one type of role. Not so for Me Before You stars Sam Claflin and Emilia Clarke who excel in the romantic tearjerker playing characters you've never seen them take on before. But, just because Will and Lou aren't The Hunger Games' Finnick or Game of Thrones' Daenerys doesn't mean the actors don't see some comparisons between the two. In an interview with Bustle, the duo opened up about how their previous roles affected the film, and Clarke, in particular, saw a lot in common between her Me Before You character and Daenerys.

"I think there are a lot of similarities between Lou and Daenerys in their strength. They're both really strong women in their own worlds, in their own ways," she says. "It's just that Lou has a bit more of an accessible strength." Clarke says she hopes people seeing the movie can draw inspiration from Lou to "be stronger and bolder" in their everyday life.

For his part, Claflin says that he started from scratch when building Will as a character, but that he does see ways Will connects to his Hunger Games character. "I think Finnick and Will are both quite charming. They look quite similar," he says, laughing. "There are so many similarities. But, at the same time, I felt like Will is his own entity and I did have to start from scratch, if you know what I mean. But, I enjoyed both equally."

While Clafin is easily recognizable as both Will and Finnick, Clarke’s characters have very different physical characteristics. Lou has a modern, quirky style of dress, her hair is brown, and she's always cheerful, if not slightly shy. By contrast, Daenerys, with her white-blonde wig and regal gowns, is an imposing figure, the Mother of Dragons. But, even without a standout costume to really set the tone like she has in GoT, Clarke says she found it easy to slip into the Me Before You role.

"I really relate to Lou," Clarke reveals. "I read it and was like, 'Someone wrote me down!' ... So I found [getting into character] very easy. It was kind of brilliant that I didn't have a wig," she says. Watch the full interview below, and marvel at the duo's general adorableness.

Whether playing Finnick and Daenerys or Will and Lou, Clafin and Clarke always deliver excellent performances, and you can catch their latest in Me Before You when it hits theaters on June 3.