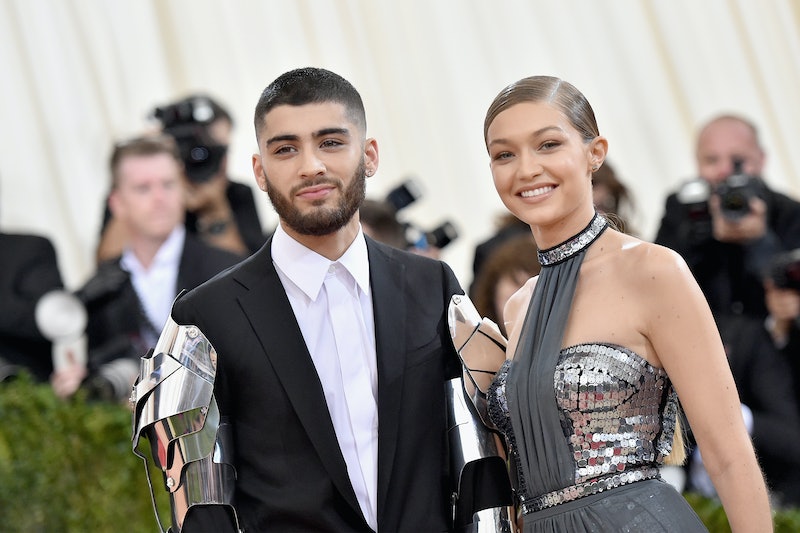 It's definitely been a rough week for celebrity relationships, especially since two celeb breakups happened that seemingly came right out of the blue. I mean, did anyone expect Taylor Swift and Calvin Harris to break up? I know I definitely did not. The world was collectively still reeling from that news when it was reported that Gigi Hadid and Zayn Malik had split, too. It's like, WTF is going on in Hollywood right now? Is Mercury in retrograde? Even though neither Hadid nor Malik have confirmed the split themselves, both have taken to social media in the hours since it was reported, and it's naturally time to analyze what exactly they may be ~saying~ about their relationship status.

Bustle has reached out to reps for Malik and Hadid regarding the breakup reports, and has not yet heard back.

If you thought they were going to go the way of Tayvin by releasing a tweet about "a huge amount of love and respect" with the other promptly retweeting it... well, I hate to break it to you, but it doesn't seem like it's going to happen here. Hadid and Malik haven't exactly gone radio silent on social media since news of the split broke, though, so here's what could be going on with them right now.

Malik posted one photo to Instagram and it's... well, check it out for yourself:

It definitely seems pretty celebratory in that "hey, I'm partying on a balcony without a care in the world" kinda way, but who knows, really? It also could be an early morning shot, where he walked out onto his balcony, glass of orange juice in hand, ready to take on the day. (Isn't that what we all do first thing in the morning?) Either way, this doesn't seem like a sad photo to me, in my obviously incredibly scientific analysis.

As for Hadid, she has posted a series of Snapchats which show her hanging out with her bestie Kendall Jenner, so she appears to be leaning on friends for support, which is always good. Hadid posted a few photos of their outings, but one telling shot came right smack in the middle, and it's honestly pretty confusing:

So, it seems like Hadid is wearing her heart on her sleeve when it comes to love, and that's never a bad thing, but the added smiley face has me confused. It's pretty happy and upbeat for someone that may be going through a breakup at the moment. Unless the "love" sentiment isn't for Malik at all, but instead for Jenner, for being such a great BFF.

The only Instagram post that Hadid has shared in the wake of the split (thus far) is a cute selfie of herself and Jenner wearing ridiculously chic hats and doing their best model poses, apparently hanging in downtown LA, thanks to the "DTLA" caption, which further indicates that maybe her "obvious love" is really for her bestie, which might be the cutest thing on Earth, actually.

Or, here's a wild idea: Maybe Hadid and Malik haven't actually broken up. Maybe the reports have gotten it terribly wrong, and they're still together, trolling us all via social media just because they can. I guess I'll just have to wait for the next snap or Insta to see... come on, guys. Don't toy with my heart.