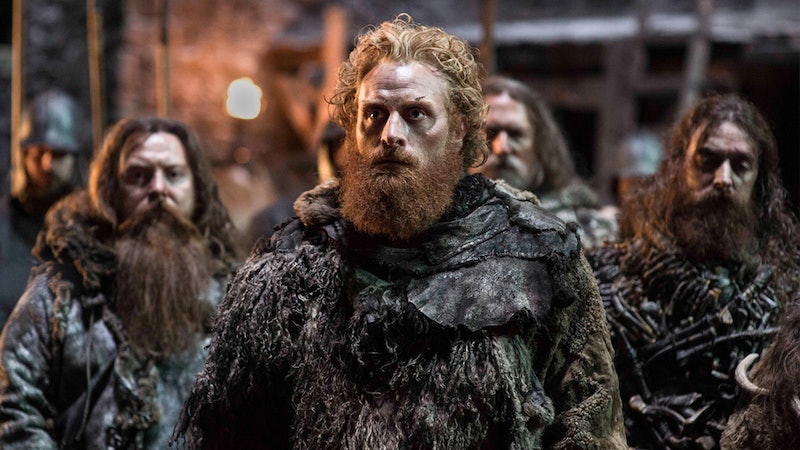 Season 6 of Game of Thrones has given the world so many gifts: a Stark family reunion, the origin of Hodor, and Tyrion hanging out with dragons, but no gift has been greater than that of Tormund and Brienne. The sexy wildling and the badass lady knight are the power couple no one knew Game of Thrones needed until Tormund started sending lusty glances Brienne's way. At first glance, Tormund and Brienne's flirtation appeared to be a throwaway gag, but it is the real deal, people. Not only has a prominent Game of Thrones director and Brienne of Tarth herself, Gwendoline Christie, confirmed Tormund's looks of longing are real (and awesome), now actor Kristofer Hivju revealed that he's team Tormund and Brienne too.

In an interview with The Hollywood Reporter, Hivju, who portrays Tormund, said, "When I read the [scenes with Brienne], I was like, "Yes! Finally! There's a love interest!" Of course, Brienne is the perfect match for Tormund Giantsbane." I could not agree with Hivju more. Tormund and Brienne are two strong characters who do what needs to be done on the battlefield and off, but Tormund has a touch of mischief about him, much like Jaime and Renly, two men Brienne has been attracted to in the past.

Brienne has dealt with a lot of jerks in her life. Three broken engagements and consistent taunts about her appearance have left Brienne's heart guarded. She does not seem to be at all sure how to react to Tormund's blatant flirting, and no one can blame her. Hivju is quick to point out Tormund is not trying to unnerve Brienne, he is just super, super entranced by her.

"In the first scene they have, when she comes in, it's like boom! Who is that woman?" Hivju told THR. "And in the eating scene he is looking at her for a while, like, "I really like that woman." And the third scene on the horse, it's like... there's a purity in it. There's a real love."

Now that it has been confirmed everyone behind the scenes is on the good ship Tormund and Brienne, the only thing missing is a scene with actual dialogue between Brienne and Tormund. I love Tormund's looks of longings and Brienne's looks of total confusion as much as the next shipper, but if Tormund is going to win Brienne's heart he is going to have to either display some heroism on the battlefield or finally have a conversation with her — hopefully, he will avoid telling his bear story when the time comes.

In the meantime, I will just be over here appreciating how into this ship Hivju and Christie are, and hoping they share more screentime soon.