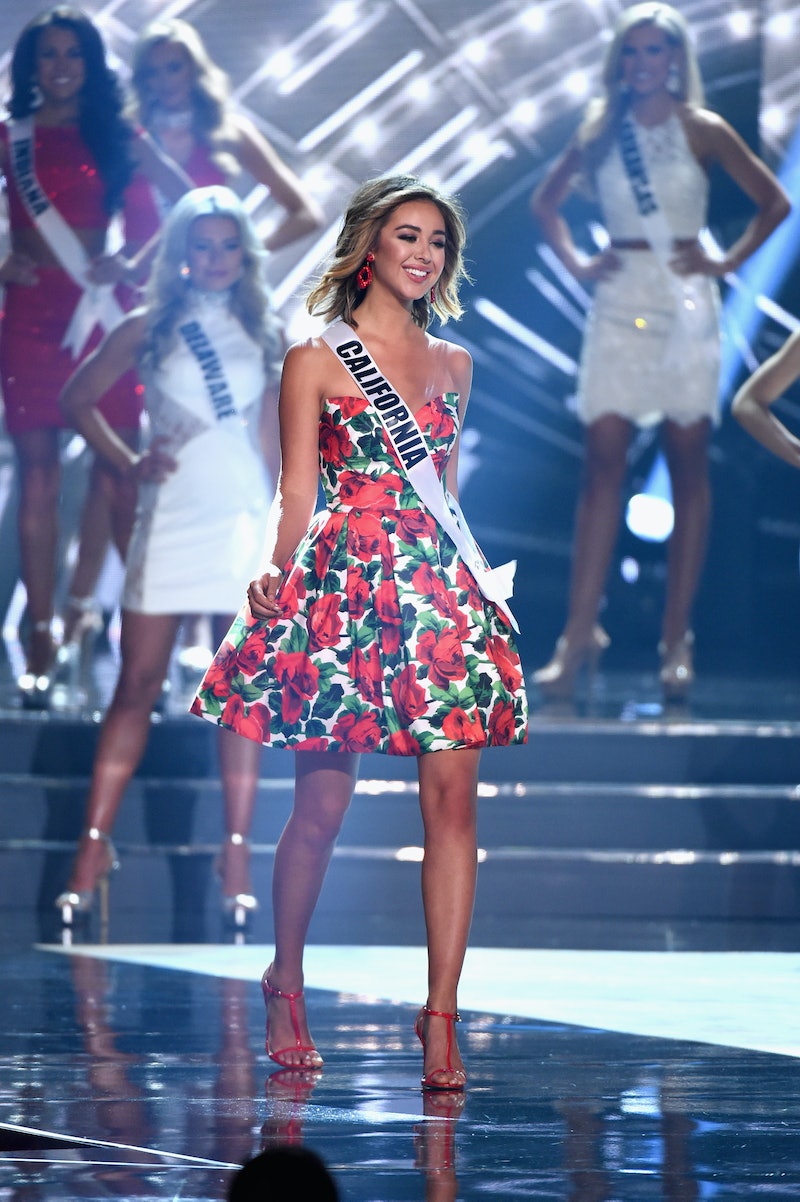 I don't quote pop diva Katy Perry often. But in this case, it makes total sense and feels entirely applicable. California girs are unforgettable! Miss California 2016 Nadia Mejia was voted the fan favorite contestant for Miss USA 2016, a fact shared by Backstage Host Ashley Graham during the pageant. But who is Nadia Mejia? What do we know about the beautiful contestant, besides the fact that she makes a "mean meatloaf," per her Instagram bio? Well, her father was a famous pop rapper back in the '90s and her mother was once a beauty queen.

Mejia also revealed during her interview package on the pageant's broadcast that she once suffered from anorexia. The Latin Times also reports that Mejia is actually a spokesperson for the National Eating Disorder Association. That organization spreads an important message, which is to "love the skin you're in," and promotes body positivity.

Due to her popularity with fans, her elegant poise, and her undeniable natural beauty, Mejia, who is of Ecuadorian and Lebanese heritage, could very well walk away with the Miss USA crown when all is said and done at the end of the night.

Here are five crazy cool things you need to know about Miss California Nadia Mejia. Her resume is already all sorts of impressive.

Well, technically, her father is onetime Latin rapper Gerardo, who had a smash hit in 1991 with the cheesy pop x rap track "Rico Suave." He used to wear a bandana and had a mullet. Go ahead and OD on all that shirtless nostalgia. There will be no '90s shaming here.

2. She Has Entertainment Career Aspirations

According to her Facebook page, Mejia is an aspiring singer and actress, in addition to being a model. She has modeled for everyone from Ulta to JC Penney to Nordstrom, according to The Latin Times.

That whole "makes a mean meatloaf" thing? She wasn't kidding. After having dealt with anorexia, her Facebook bio reveals that Mejia now has a passion for healthy eating. She once had a blog, dubbed "Nadia's Bikini Bistro," on which she shared healthy recipes. The domain has since expired, though. She told Fox 40 that she eventually wants to open up a Latin American Mediterranean fusion restaurant, nodding to her background.

She was actually destined for pageant life, since her mother Kathy was Miss West Virginia in 1989. Another fun fact? Mejia was born in the Dub Vee, as well.

Check out this gorgeous and generational pic of Miss USA contestants!

5. She Is Committed To Her Faith

Mejia is also deeply committed to her faith, something she proudly admits on all of her social media. Her Insta feed is sprinkled with lots of biblical quotes throughout. Her devout nature makes sense, since her father Gerardo has reinvented himself as a Christian youth pastor.