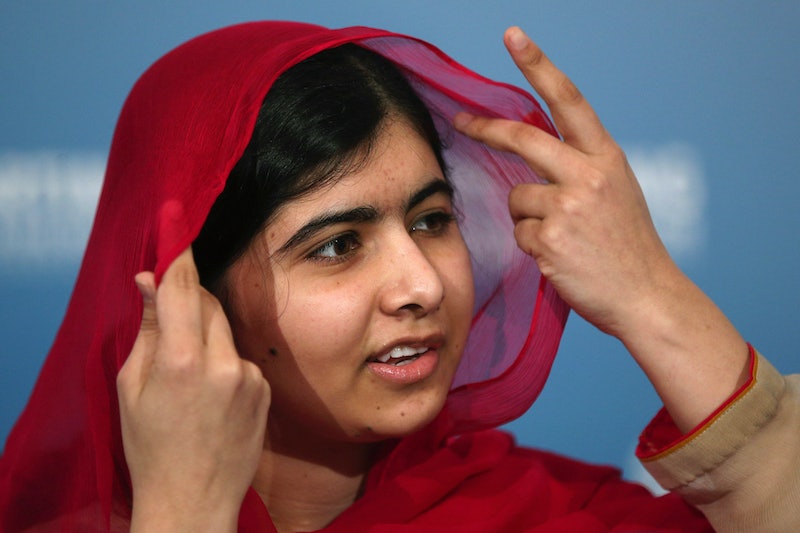 In case you need a refresher, the sub-continent of South Asia is commonly used as a term to group together and refer to the southern region of the Asian continent and the people who populate it. This area includes Afghanistan, Bangladesh, Bhutan, India, Nepal, Maldives, Pakistan, and Sri Lanka, where the primary languages spoken are Urdu, Hindi, Punjabi, Marathi, and Gujarati. In mainstream media, the only real representations of South Asian people seen recently include Aziz Ansari in his show Master of None, Mindy Kaling from The Mindy Project, and Priyanka Chopra from Quantico — and while all those shows put forth considerable effort on the part of the actors and the characters to dispel stereotypes, the fact that I can count them all on one hand is an issue.

But it doesn't have to be. There are so many inspiring South Asian people whose stories may not be heavily publicized in American culture, but whom are all worth knowing about and following. Let's take a look at 10 of them to start:

In 2012, Malala Yousufzai was shot in the head by a member of the Taliban because she advocated equal education for girls both in her community and all over Pakistan. She survived, and in 2014, she won the Nobel Peace Prize for her activism working towards equal education for women in Pakistan and all across the world.

Khalida Brohi is an MIT alum and founder of the Sughar Foundation, which is dedicated to helping rural and tribal women in Pakistan learn leadership skills that will help them within and outside of their communities. In addition for her work for the Sughar Foundation, Brohi's activism focuses on ending honor killings in Pakistan. Her TED profile reads that she's passionate about "unleashing the potential in women."

Sabeen Mahmud was a human rights activist and worker for a social NGO. She founded a cafe called The Second Floor in Karachi, Pakistan, a space she created for artistic expression where she would hold discussions, film screenings, poetry, stand-up, and live theater and empowered the community to think critically. Her work wasn't welcome by all in the tumultuous political and sometimes extremist climate present in Pakistan, and she was tragically shot in 2015. Her legacy, work, and commitment to art and her civic duties live on.

Zar Aslam is the CEO and co-founder of the Environmental Protection Fund, a non-profit dedicated to community building and tolerance by means of community service and volunteer initiatives. Volunteers and students learn about their social responsibilities towards the environment and each other.

Alok Vaid-Menon and Janani Balasubramanian are the two trans members of the South Asian poetry and performance duo known as DarkMatter. Their radical politics and progressive ideas encourage all people — regardless of gender identity or sexuality — to think outside of the system in which our ideas have been limited. I highly recommend following the DarkMatter Facebook page to see them and their work in action.

Farhan Akthar is a quadruple threat: He's a singer, an actor, a filmmaker, and a UN Women's Goodwill Ambassador, a role to which he was appointed in 2014. He specifically calls for men and boys to participate in changing and reshaping the way women are treated today in South Asian societies, whether it's in Pakistan, Bangladesh, or Bhutan. Before he got appointed as ambassador, he founded Men Against Rape and Discrimination (short for MARD, which in Urdu and Hindi means "man" or "male").

Parineeti Chopra, an Indian actress, shut down a journalist in 2013 who had victimized men who rape women and villainized women. Her comments are inspiring and should be especially noted in India, a country that ranks third in the world for number of rapes. By the way, take the title of the clip above with a grain of salt: Chopra is, of course, not talking about sex. She's talking about rape, and her anger is justified, despite the sensationalization of the title with an exclamation mark.

Kshama Sawant, an Indian-born American city council member, was the first socialist to win a city-wide election in Seattle. Her main platform has been to raise minimum wage and bring thousands of Seattle-ites (and eventually, Americans as a whole) out of poverty, but Sawant has also advocated for ending racial profiling, protecting the environment, getting rid of the two-party system, and ending corporate welfare.

Habiba Nosheen is a Pakistani-Canadian journalist whose 2013 documentary about a woman who was allegedly gang-raped at age 13 by four men, Outlawed in Pakistan, premiered at the Sundance Film Festival in 2013. She holds a masters degree in Journalism from Columbia University and a masters degree in Gender Studies from York University. Her Peabody Award-winning reporting has appeared in the New York Times, NPR, BBC, CBS, PBS, and TIME.

Mileha Soneji is a product designer from India who combines the design process with emerging technologies to empower people who may be otherwise struggling with certain aspects of their lives or bodies. In this TED Talk, for example, Soneji discusses how smart design and empathy helped her design innovative items for people with Parkinson's.