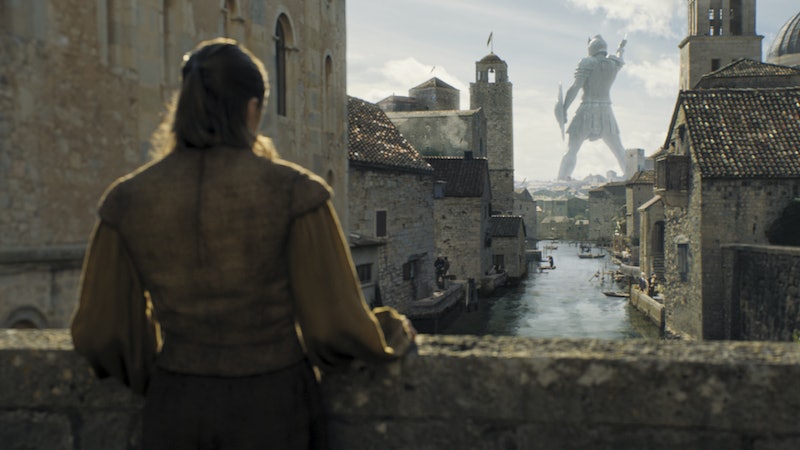 Game of Thrones took some pity on viewers by not ending "The Broken Man" with Arya's bleeding body disappearing into a river. But, just because the series didn't wait to show that she initially survived her stab wounds courtesy of the Waif, there are theories that Arya could die on Game of Thrones. She managed to escape her execution by diving off a bridge into the water, but Arya is clearly severely — and possibly, fatally — hurt. As the Braavosi people seemed to be intentionally ignoring the soaking wet and bleeding Arya as she stumbled through the streets, there is a chance that the youngest Stark sister could meet her untimely end.

Bloody, horrible deaths run in the Stark family, but as Jon Snow recently was stabbed and resurrected, it has been since Season 3 that a member of the Starks has been successfully killed. With that in mind, a member of the Stark family is pretty much due to die (and stay dead) on the HBO series. But Arya?! Can fans really handle Arya dying? At least according to Twitter, they could not — even if many viewers blame Arya for not seeing this stabbing coming. But, unlike many other deaths on Game of Thrones, there is hope for Arya since she managed to keep going after having her stomach slit open and then having the knife literally twisted inside her.

Because she didn't die immediately — and because she's goddamn Arya Stark — most people, including myself, think Arya will survive. But, what if finally realizing she does want to be a Stark and not a no-faced assassin actually does lead to Arya's demise? Her story line would come to basically nothing with no one in Westeros ever knowing where she disappeared to. Her face would most likely become a feature in the Hall of Faces and in that way, Maisie Williams could still be on the show even if Arya died. Her face would be perfect for the Faceless Men to use for some truly spooky and confusing Westeros assassinations and perhaps Arya might still be able to check off some people on her kill list, even if it isn't actually Arya doing the killing.

Yet, just like with Jon Snow's death by stabbing at the end of Season 5, killing off Arya would just be a waste of a strong character. And, thanks to to the preview for the June 12 episode, "No One," (the title in itself is a reference to Arya failing to become "no one" for the Many-Faced God), it appears Arya will be alive at least for one more episode. Arya is shown to be leaping through the air while running from the Waif in the streets of Braavos, so she either recovered quickly or is pushing her body to the limits to survive the wrath of the assassins of the Many-Faced God.

If seeing Arya in the next episode is still not good enough for you, then consider some other Arya survives theories: One is that Arya and the Waif are the same person (Fight Club style) and another is that it wasn't actually Arya who was stabbed, but possibly Jaqen H'ghar testing the Waif since he told her not to let Arya suffer. The Waif has had it out for Arya since she was introduced, and I've hated her character the entire time, so this would be the best case scenario. Plus, where was Needle when "Arya" needed it and where did "Arya" get all that money?

No matter what actually happens to Arya, take some solace in the fact that there will be at least one more episode featuring her character. And if she does die, the below tweet has a reasonable suggestion for how Arya fans should react to her death.