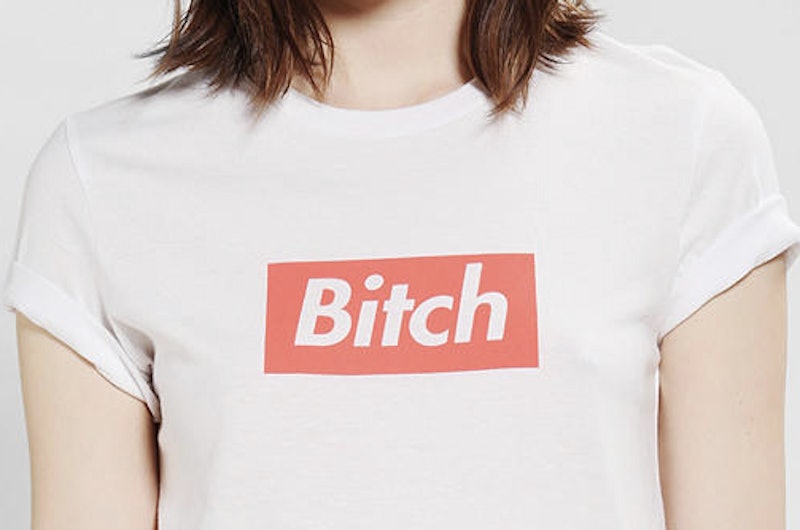 First, I want to make it clear that I am not anti-swearing. Sometimes you stub your toe, or you just miss the subway, or you see a photo from your ex's evidently perfect trip to Paris with his new girlfriend, and there is just nothing that feels quite as good as letting out a four letter word. And, yet, upon a recent stroll through Urban Outfitters, I found myself wearing the same horrified look my mom gets whenever someone says anything dirtier than "Oh, scratch!" I saw a shirt that said nothing but "Bitch," a muscle tee with cigarettes lined up to spell the word "Fuck,"and about four different shirts relating to drugs.

Urban Outfitters has always been known for their snarky, tongue-lodged-deep-in-cheek graphic tees. I remember being in middle school and having my dreams snapped by my parents who told me I couldn't get one of their "Everybody Loves a Jewish Girl" shirts because it was "inappropriate." Well, I can only imagine what my parents would have done had I asked for a cropped muscle tee shirt adorned with marijuana leaves on my breasts.

After leaving Urban, I felt bummed—and not just about the t-shirts. I was upset that I was upset, which is the kind of emotion so frustrating it makes you want to throw your hands up in the air, call it a day, and spend the rest of your existence curled up in bed watching Parks and Recreation on Netflix. Being offended by these t-shirts made me feel, well, old. I couldn't help but wonder: Am I being too uptight? Have I crossed some threshold into Serious Adulthood? Am I no longer allowed to watch Pretty Little Liars? I ultimately decided that the answer to those questions—especially that last one—is one loud, resounding, "no."

One could say that these shirts are just for fun and shouldn't be taken seriously, but, the truth is, how we dress is how we present ourselves to the world. We don't spin a wheel to decide what we're going to wear, we don't wear uniforms, and most of us put more thought into our outfits than just, "I need to cover up my naked body." Nobody needs to shop at a trendy store. You go there because you are looking to evoke a certain kind of style and be associated with whatever that store is trumpeting. These correlations are what make these companies so powerful, and on what they base the design of their stores.

Perhaps no company has employed this technique better than Urban Outfitters, Inc., which owns Anthropologie, Free People, and, of course, Urban Outfitters. When you open those giant, wooden Anthropologie doors, ready to purchase a dress adorned with tiny printed fawns, you might be trying to signify that you are the kind of person who plays the ukulele and doesn't mess up the recipes on Pinterest. Or when you go into Free People and ask the sales associate if they carry the flower crown she's wearing in a different color, it's because you imagine yourself wearing it at Coachella. It's the same way I feel after watching a Red Bull commercial that frames the drink at a rooftop party. I don't want Red Bull. I hate Red Bull. What I want is to go to a rooftop party.

The associations of Urban Outfitters are a bit trickier to identify than Anthropologie or Free People since they cover quite a few different styles. In the case of the graphic t-shirts, especially the R-rated ones, they appear to be sending sparks up to a node and triggering images of laid-back girls smoking weed on a beach in L.A. and throwing up their middle finger all over their Instagram. However, instead of actually being that person, you pay about $40 for people to think you're that person. It's a dangerous game, especially when you consider all the other associations someone might have with a shirt that reads "New York City Motherf*cker That's What!" People might be offended. They might be completely put off by you before getting to know you. They might wonder why you would ever buy such a shirt. It's basically one giant game of associations roulette, and there's no real way to tell whether or not you're winning or losing.

I am far from being anti-swearing, but I just can't get behind a shirt that says nothing but "Fuck." There's nothing clever about it. There's nothing smart about it. It's the graphic tee equivalent to the kind of bathroom humor jokes that make me second-hand cringe with embarrassment. I hope that finding these shirts ridiculous–and, honestly, a bit offensive—doesn't make me old, but, if it does, sign me up for retirement and get me on the next flight to Boca Raton.