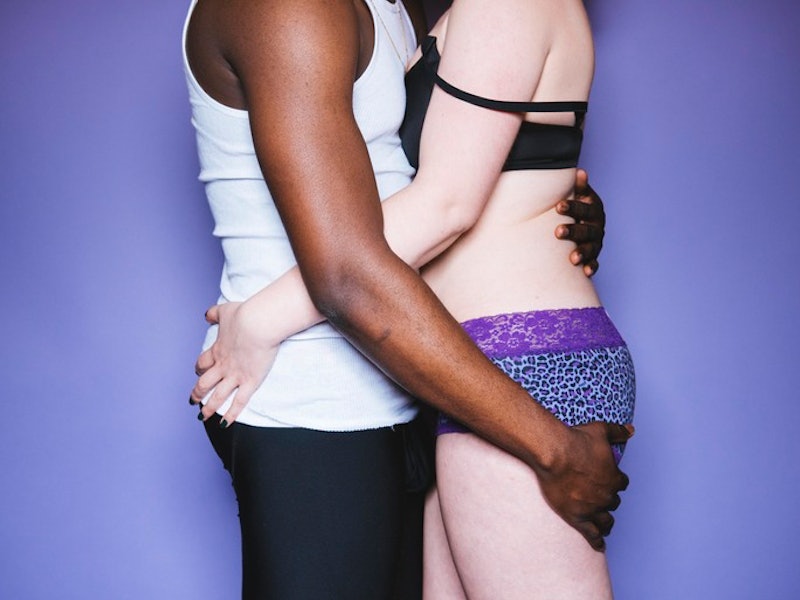 I really, really, really wish people didn't care about their number of sexual partners. I've said it before and I'll undoubtedly say it again, but not only does your number of sexual partners not say a dang thing about who you are as a person, it doesn't even say anything about your relationship to sex. You may love sex, but have only ever had it with one person. You may have had sex with lots of different people at one point in your life, but since your sex drive has slowed. It shouldn't matter. We should be able own our number without it having a million connotations.

And yet, we're still lying about it. At least, a lot of us are. According to a new survey by SuperDrug Online Doctor that looked at over 2,000 partipcants across the United States and Europe, a whole lots of us are still fibbing about our number of sexual partners. The survey found that over 32 percent of women and 41 percent of men had lied about their number of sexual partners, which is just too many. It does mean that 67 percent of women and 58 percent of men are telling the truth, which is heartening, but that fact that anyone is so embarrassed of their sexual history that they feel the need to lie about it is really unfortunate.

Even worse, the way that society judges the number of sexual partners is so changeable and confusing, we're lying in both directions. Here's are some of the biggest takeaways from the survey:

1. Men Are More Likely To Lie To Make Their Number Bigger

Maybe not surprising, but it's still upsetting. 17.5 percent of men lied to increase their number of partners, compared to 8.2 percent of women; meanwhile, 18.6 percent of women lied to decrease their number, compared to 13.3 percent of men. Considering how much women are slut shamed for having multiple sexual partners, and how men are made to feel inadequate for not having "enough," I'm not shocked — but it shows how unfair these standards are. And how they have a negative impact on everyone.

2. But Some People Lie In Both Directions

Speaking on unfair standards, 5.8 percent of women and 10.1 percent have lied to make their numbers higher and lower in different situations. The fact that can feel your number is too much and not enough shows just how much we need to drop these stigmas.

3. A Lot Of People Would Dump Someone Over Their Number

30 percent of people said that it was "likely" or "very likely" they would dump someone over having too many sexual partners, which is infuriating. Luckily, 70 percent said they were "neutral" or that it was unlikely it would lead to a relationship breaking down.

4. People Think The Perfect Number Is Basically How Many They Themselves Have

This is interesting. So the average number of sexual partners reported was seven for women and 6.4 for men and the number considered "ideal" was around 7.5 for everyone. That means that people judge the perfect amount at, well, just about what they've done.

One good thing was that most people are open about their sexual history from the start. Over 65 percent of both men and women said they would share their sexual history in the first four months, while only 10.9 percent of women and 11.3 of men said they wouldn't disclose at all. I wish that number was zero, the fact that a lot of us are talking openly is a good start.

Different cultures have some very different attitudes toward sex. While in France the ideal number was 10 partners and someone being "promiscuous" didn't start until 16 sexual partners, in Netherlands the ideal was six and 11 was considered promiscuous. It just emphasizes how much it has to do with perception — the actual number doesn't mean anything on its own. It's the culture that surrounds the number that makes us think it has more significance than it does.

Not all states reported, but of those that did, Louisiana came in at the highest with an average of 15.7 sexual partners. Utah came in at only 2.6 as the average.

But the bottom line, at Superdrug Online Doctor's message, is that you have to be safe, whether you have 1 partner or 100 partners. They explain: "Regardless of your number of past partners, what’s most important in any sexual relationship is taking precautions to prevent the spread of STIs." Own your number, and be safe.