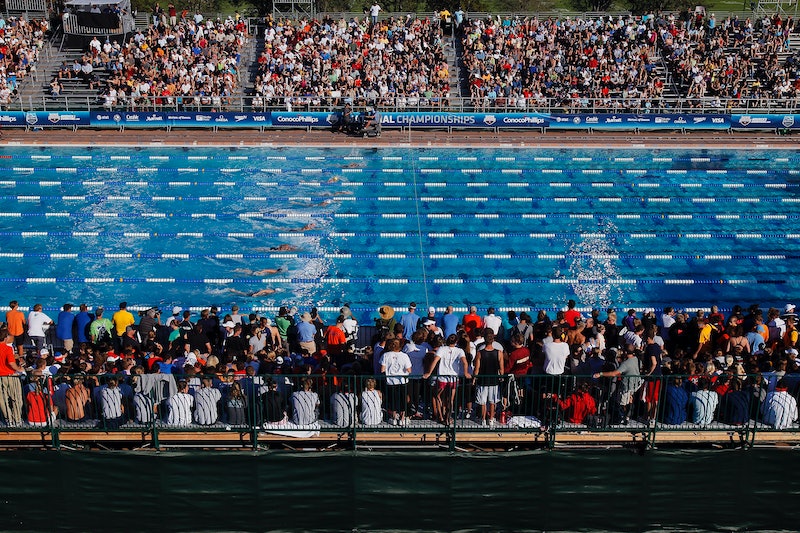 After a March conviction on three counts of sexual assault against an unconscious woman, former Stanford University swimmer Brock Turner was sentenced on June 2 to six months in county jail. The sentencing has gained notoriety in the past few days after Turner's father shared an open letter pleading that his son didn't deserve the sentence for "20 minutes of action." And with all eyes on the case, people are naturally curious for details about those involved. But with people wrongly focusing on the accomplishments of the perpetrator rather than the trauma of his victim, I caution against anyone looking for Brock Turner's swimming times or other athletic achievements, because they don't matter. In fact, not only do they not matter, but taking them into consideration also deeply undermines the very heart of this case.

Let's first examine this letter by Dan Turner. By now, it has probably reached your eyes on some form of social media. He infamously wrote that "this is a steep price to pay for 20 minutes of action over 20 plus years of his life." He cites that Brock will "never be his happy go lucky self," and that "Brock can do so many positive things as a contributor to society." The letter dismisses his assault, saying Brock "has never been violent to anyone including his actions on the night of Jan 17th 2015."

Here is the letter in full:

Part of the reason this is such a high-profile case is inarguably because of Turner's swimming career. By citing his career and behavior, his father argues that his son doesn't deserve to be punished to the degree of other people who have committed this same crime. In his eyes, the assault does not outweigh his son's potential — a clear statement of entitlement that blatantly perpetuates rape culture by putting the assaulter's needs before the victim's.

And with Turner's swimming career highlighted in the majority of headlines in this case, it may seem only natural that people would wonder just how good of a swimmer he was. But therein lies the problem. If we’re wondering about Turner’s swimming times in the first place, it can only be for one reason: Even unconsciously, we are also using it as a judgment as to whether he “deserves” to be punished. Unconsciously, we want to know how good he was at swimming, to see just how much an impact his loss would be to the sport, to see just how much of an impact he has made or could make in the world. And however unconscious that reasoning is, it is still toeing a very dangerous line that runs right alongside his father's letter.

This sentiment was, unfortunately, one of the motivations for the unnamed victim to go public with her impact statement. Although she has no obligation to share the details of what happened in her assault, she took the opportunity to highlight the effect Brock Turner's swimming abilities has had on her case. She wrote that she ended up learning the details of her own assault in a published article online, and added:

And then, at the bottom of the article, after I learned about the graphic details of my own sexual assault, the article listed his swimming times. She was found breathing, unresponsive with her underwear six inches away from her bare stomach curled in fetal position. By the way, he’s really good at swimming. Throw in my mile time if that’s what we’re doing. I’m good at cooking, put that in there, I think the end is where you list your extracurriculars to cancel out all the sickening things that’ve happened.

She makes the point that she shouldn't have to be making, one that we should already inherently understand: Brock Turner's swimming times should have no impact on the way the public views his sentencing, the same way that his prior criminal history or his alleged remorse should have no impact on his sentencing. To think otherwise is to, however unconsciously, agree with Turner's father that he should be exempt from the laws that punish those who commit sexual assault, based on something that has nothing to do with the crime.

If our ultimate goal truly is to help victims of sexual assault, then help them by not looking into Brock Turner's swimming times — or any other assaulter's past contributions to society, for that matter. They are not only irrelevant, but considering them undermines the very victims it is society's obligation to protect.