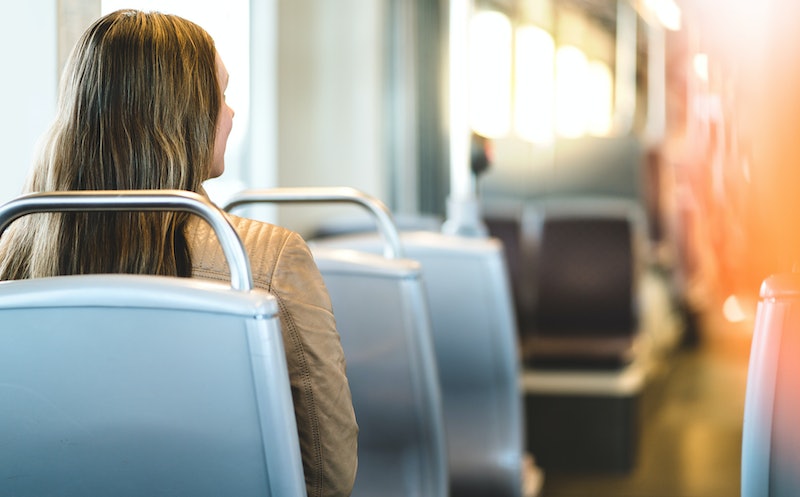 Sometimes, when I'm sitting on a restaurant chair or a friend's couch and have to stretch out, I'll intentionally let my legs splay open. It's like some secret, subversive feminist gesture to take up more space. So, when I read in Fortune's Broadsheet that women aren't penalized for "womanspreading" (the female equivalent of manspreading) and using other non-verbal cues to express assertiveness, my spread-out legs did a little victory dance.

The newsletter pointed to a Wall Street Journal article by Melissa J. Williams, who conducted a meta-analysis of research on how people judge women's verbal and nonverbal communication. And the results showed what anyone who's followed the backlash against Hillary Clinton's campaign could tell you: People don't like when women speak assertively. "Women were particularly penalized for direct, explicit forms of assertiveness, such as negotiating for a higher salary or asking a neighbor to turn down the music," Williams wrote. While people didn't find assertive women less competent, they did find them less warm and likable.

However, there was one area where women got away with asserting power: In their body language. When women took "expansive bodily stances" or stood closer to people they were speaking to, people didn't judge them more harshly than they judged men. People also were OK with women speaking loudly or interrupting, as long as the content of what they had to say wasn't too demanding.

So does this mean we should start a womanspreading revolution?

"By using these alternative expressions of leadership, women can sidestep the prejudices that make it hard to keep the respect and admiration of their team," Williams suggests. She adds, though, that they certainly shouldn't have to, and it's not fair to expect women to rectify sexism in the workplace or anywhere.

Here's another issue with that suggestion: Taking up space in places manspreaders are often spotted like the train, where the people around you need to sit down, is just kind of a crappy thing to do in general. So are interrupting people and raising your voice at them. So maybe it's a problem that we view these behaviors as assertive in the first place. Maybe we need, instead, to realign our thinking about them overall — no matter what the gender of the person display these behaviors might be.

It's understandable for women to want to fit into environments that prize masculine traits. As Williams points out, people are more likely to follow the lead of those who exude dominance, and this information could be useful for people looking to get ahead.

But we should be skeptical that the things we've learned to associate with assertiveness are often also the behaviors we associate with men. Instead of upholding men as models for self-assuredness and confidence and encouraging women to conform to those standards, we should be rethinking what ideals we strive toward. That'll have a more lasting impact — not only on how we see women but also on how we see people of all genders with different communication styles — than policing anyone's posture.

More like this
How To Fight For Reproductive Rights, Based On How Much Time You Have
By Courtney Young
5 Crystals To Manifest More Money
By Megan McCarty
Sandra Bullock, Girlboss Extraordinaire
By Matt Harkins & Viviana Olen
Your Home Could Seem So Much More Expensive If You Tried Any Of These Cheap Tricks
By Dena Ogden and Sara Brown-Rigoli
Get Even More From Bustle — Sign Up For The Newsletter