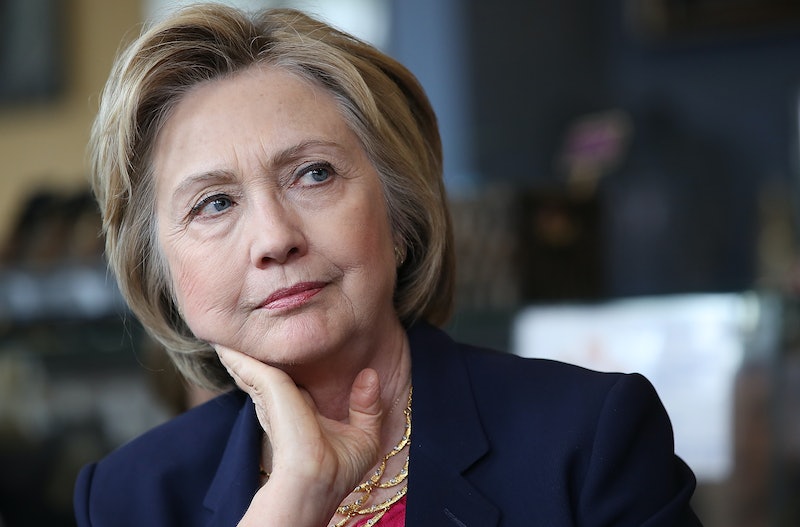 The United States is going through a lot of conflicting things right now. On the one hand, it looks like Hillary Clinton will likely be the Democratic presidential nominee; if she lands it, it will be the first time a woman has had this title, which indicates that we as a country have come far enough to potentially elect a woman. On the other hand, though, the opposing party (and even the Democratic party at times) have painted this country as anything but a site of feminist progress. We've seen some incredible instances of sexism not only from the candidates themselves, but also from the public's response to the election.

Somewhat unbelievably, it's still not uncommon to hear people claim sexism isn't a thing in this country right now — that we've moved beyond it. But if you've been watching and reading coverage of the election, it's pretty difficult to deny that sexism is still a huge problem in the United States. Here are some examples from the 2016 election that prove sexism is definitely alive and well.

1. All The Times Hillary Clinton's Voice Was Criticized

Despite Bernie Sanders's habit of shouting, the only candidate whose voice has been heavily criticized during this election has been Hillary Clinton. For example, Donald Trump specifically called Clinton "very shrill"; and as one more additional example (among many), Colleen A. Sheehan wrote in The Inquirer, "With a decidedly grating pitch and punishing tone of voice, Clinton lacks the elegance and grace of a Jane Fairfax — or a Nikki Haley or Michelle Obama. In contrast, Bernie Sanders is almost universally endearing." While Clinton's voice and appearance get criticized and compared to other women, Sanders gets to be "endearing." That is messed up.

2. All The Times Hillary Clinton's Age Was Criticized

Even though Clinton is younger than Sanders and Trump, that hasn't stopped her opponents from attacking her age. Fox News host Sean Hannity said of the candidate, "She's aging, out of ideas, often shrill, apparently according to oral reports angry and clearly not inspiring. Marco's 43, Hillary's closer to 70."

This wasn't the first time Clinton has been criticized for her age, either. When her daughter Chelsea was pregnant, The Drudge Report posted an unflattering photo of her with the headline "Grandma Hillary." While Sanders hasn't entirely escaped ageism himself, studies show that ageism is more of a problem for women, and this election has reflected those findings in a very real way.

3. How Donald Trump Has Responded To Megyn Kelly

It started last summer, when Fox News anchor Megyn Kelly asked Donald Trump during the GOP debate on Aug. 6, "You've called women you don't like fat pigs, dogs, slobs, and disgusting animals. ... You once told a contestant on 'Celebrity Apprentice' it would be a pretty picture to see her on her knees. Does that sound to you like the temperament of a man we should elect as president?" In an interview after the debate, Trump then fired what many took to be a period joke at her, saying that Kelly had "blood coming out of her wherever" when she spoke with him. (Trump later denied that the statement was a reference to menstruation, although he also declined to apologize to Kelly.)

This incident is far from isolated, though. Trump has also called Kelly "crazy," which is far from acceptable for a number of reasons; first off, it's ableist, and second, as Bustle's Lauren Holter wrote in March of 2016, "Not only is it ridiculous to call a news anchor 'crazy' for doing her job, but it's also incredibly sexist to say that a woman is insane just because she speaks her mind, asserts authority, and stands up to men." Futhermore, Kelly has faced a continual explosion of Twitter trolls using misogynistic slurs against her in support of Trump.

4. When Trump Compared His Wife's Appearance with Heidi Cruz's

As if this were at all related to either candidate's ability to govern the country, Donald Trump tweeted a photo of his wife next to his opponent Ted Cruz's wife, as if to imply that his wife is more attractive — and, therefore, that he is superior to Cruz. Never mind what either of these women would offer as First Lady; it was their looks that he focused on. It's our culture's tendency to value women only for their appearance writ large.

Amid commotion about North Carolina's "bathroom bill," Ted Cruz said at an event in Indiana, “If Donald Trump dresses up as Hillary Clinton, he still can’t go the girl’s bathroom” — implying that trans women are just men dressed as women. In an interview with Glenn Beck, he also aligned trans women looking to use the bathroom corresponding to their gender with predators: “When you deal with people who are repulsive perverts and criminals — there are some bad people in the world and we shouldn’t be facilitating putting little girls alone in the bathroom with grown, adult men." He may be out of the race, but the fact that enough people supported his views to keep him in for as long as he was is troubling.

6. When These Hillary Clinton Badges Were Sold At A Trump Rally

Once again, Clinton's opponents went after her appearance. At a Donald Trump rally, supporters sold badges reading "‘KFC Hillary Special: 2 fat thighs, 2 small breasts." If criticizing a woman running for president on the grounds that she has "fat thighs" and "small breasts" is not sexism, I don't know what is.

More like this
34 Quotes That'll Inspire You On Juneteenth & Beyond
By Syeda Khaula Saad and Siena Gagliano
How Getting An Abortion Has Changed From The ’60s Through Today
By Amanda Chatel
Why You're Seeing Green Bandanas At Abortion Rights Protests
By Lexi Inks
How To Fight For Reproductive Rights, Based On How Much Time You Have
By Courtney Young
Get Even More From Bustle — Sign Up For The Newsletter