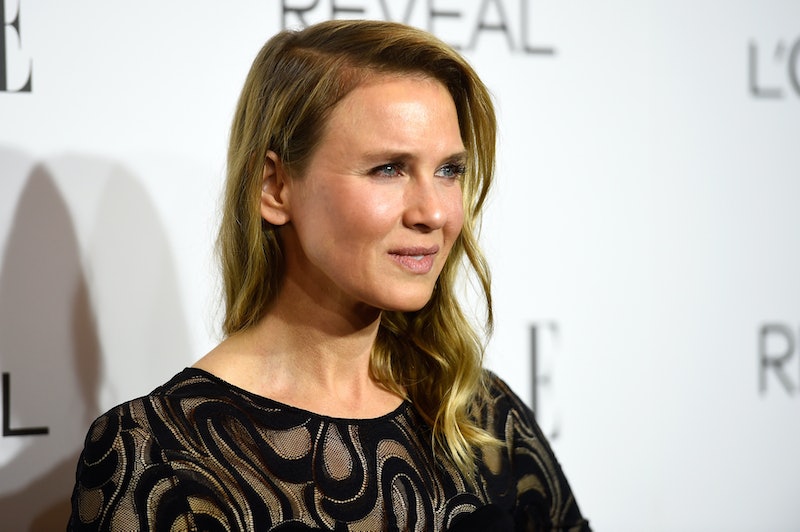 It's been a rough few years without the one and only Renée Zellweger. I mean, Bridget Jones is a world-renowned icon. But fans love Zellweger for mesmerizing on screen beyond the Bridget Jones's Diary franchise in epic films like Jerry Maguire and Chicago. But after My Own Love Song in 2010, the 47-year-old bowed out of the spotlight until recently, with news of the reboot Bridget Jones's Baby causing fans everywhere to rejoice. Still, there's been a lot of mystery around the actor and her whereabouts, especially with the buzz around her "unrecognizable look" in 2014. Taking such a long break from Hollywood is almost unheard of for vets in the business, and Zellweger has remained hush about why she decided to do so, until now. The decision was one many may not agree with, but I commend her for it.

In an interview with Vogue, the star got candid about taking a breather from the big screen in order to focus on herself. "I found anonymity, so I could have exchanges with people on a human level and be seen and heard, not be defined by this image that precedes me when I walk into a room," she told the magazine. "You cannot be a good storyteller if you don't have life experiences, and you can't relate to people."

To some, taking a break for the sake of yourself and/or the craft may seem selfish, or like a cop out. But there was more happening at the core. Essentially, she was exhausted. "I was fatigued and wasn’t taking the time I needed to recover between projects, and it caught up with me," she admitted. "I got sick of the sound of my own voice: It was time to go away and grow up a bit."

Now, in a world where we're taught to grind, grind, grind, one may think this just seems lazy, especially for someone living the posh life of a movie star. I'll admit, I had that thought for a fleeting moment. But then I remembered that I'm not an actor, so I don't know about the work and mental drainage that goes into the job. Plus, maybe we all just work too damn hard.

Either way, we've seen stars succumb to their tiring careers without actually taking a breather for the sake of their health or sanity far too often. It's happened to Demi Moore and Mariah Carey, just to name a couple. While I greatly respect entertainers for committing to their work, whether it be for the sake of their fans or their own personal achievements, if they need a break and have the courage to tell the world why (when they'd almost always get judged for it), I'd respect them even more.

Go Renée, for making this move and being unapologetic about it.