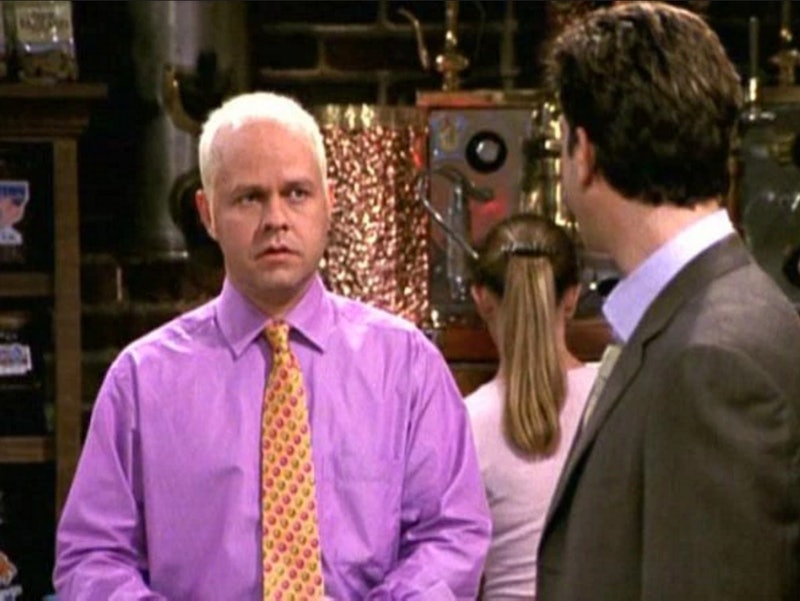 It's been over 20 years since Rachel Green (Jennifer Anniston) barged through the doors of Central Perk, with her wedding dress, and her deep ignorance of how finances work. But, it was the surly, golden haired waiter lurking in the background of that coffee shop who would really make his mark on the show. Though he wasn't introduced until a few episodes later, I like to think that Gunther — at least in spirit — had been there from the very beginning. For 10 beautiful seasons, the friends of Friends spent a somewhat alarming amount of leisure time at Central Perk, but they were never alone. Even when they were alone (like, when there was just one of them in the scene), they were never alone. Because of Gunther. The manager at Central Perk and Friends’ best minor character. Yeah, I said it. Gunther was the best minor character on Friends. Come at me and challenge that, I dare you.

Alright, it's not like he had a ton of competition. There was Carol and Ben. We had Jack and Judy Geller, who were wonderful but kind of absent, and later Frank Buffay Jr., Phoebe's brother. Also, oh my God, can't forget Janice. But none of these characters could hold a coffee scented candle to the apathetic, monotone, lovesick Gunther. Here are 13 reasons to prove my point.

1. He Said What Everyone Else Couldn't

Because Gunther didn't have any stakes in a lot of the things happening within the friend group, he could say whatever he wanted with little repercussions.

Sure, his life was a tad depressing since he worked a job he didn't really like and the one person he loved couldn't be bothered to pay attention to him, but that's what made Gunther so relatable.

3. He Would Do Anything For Love

Including but not limited to: buying Rachel's hairless cat, which he thought was "some kind of snake or something."

OK, so I fall into the camp of people that enjoy Ross, but you have to admit that Gunther's relentless hatred for the character was kind of inspirational.

5. He Was A Constant

We could always depend on Gunther. In 236 episodes of Friends, guess who was in 181? Ya boy Gunther.

6. He Stirred The Pot

Like in "The One With The Morning After" when he told Rachel what happened between Ross and the girl from the copy place. "I'm sorry. Was I not supposed to?" Gunther, you dog.

9. He Was The Underdog

Speaking of that, Gunther was totally the underdog of the Friends cast. Always outside of the circle. He was never listened to or invited places except out of obligation once or twice. And yet, I was always rooting for Gunther to have a win.

10. We Never Really Learned Anything About Him

We didn't know Gunther's last name, but it didn't really matter. Which just goes to show the greatness of his character.

11. He Always Surprised Us

Since we never really got to know Gunther, whenever part of his personality showed, we were always surprised. Like when we learned he was on the soap opera All My Children. Or when we learned that he smoked and then delivered this surprising, but glorious line: "Oh dark mother, once again I suckle at your smoky teat."

12. He Wasn't Above Physical Comedy

When Rachel finished that cross word puzzle and said "there's nobody to hug!" Gunther came rushing through to be that body! Only to fall flat on his face.

13. He Didn't Even Have To Say Anything To Be Funny

Probably one of my favorite Gunther scenes is when he kicks Rachel's potential love interest out of Central Perk. Get after it, Gunther.

At the end of the day, Gunther really didn't care about anything besides Rachel, but I'll tell you this much: We viewers cared a whole lot about him.

More like this
24 Years Ago, 'Friends' Dropped Its Most Underrated Ross & Rachel Episode
By Grace Wehniainen
The Best 'Grey's Anatomy' Intern Moments, From MAGIC to Glasses
By Grace Wehniainen
Netflix Reveals First Look At Wednesday In The 'Addams Family' Spinoff Series
By Bustle Editors
A New Scooby-Doo Movie Confirmed Velma Is Gay & Twitter Is Pumped
By Radhika Menon
Get Even More From Bustle — Sign Up For The Newsletter