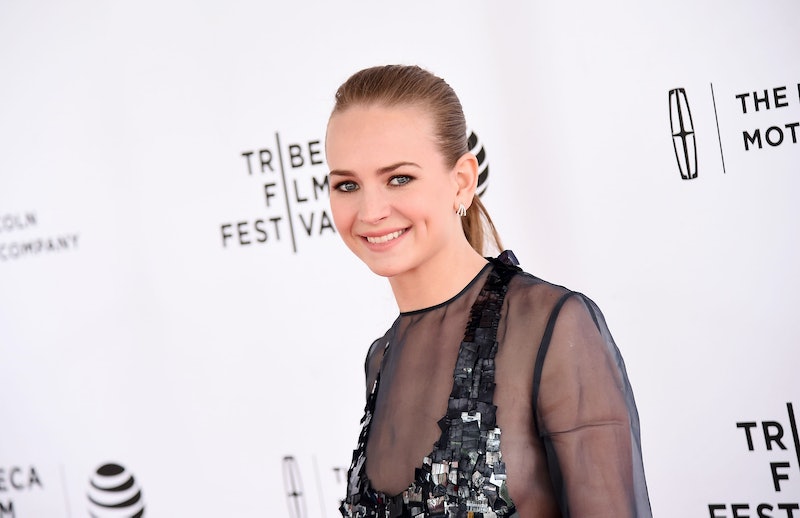 Netflix has an all-new original series on the way and with a title like Girlboss it's sure to be exactly the kind of show you can marathon once you're done re-watching Gilmore Girls. Girlboss — based off of the the best-selling book of the same name by author Sophia Amoruso — centers itself around "Sophia, a rebellious, broke anarchist who refuses to grow up," according to Deadline.com. "She [Sophia] stumbles upon her passion of selling vintage clothes online and becomes an unlikely businesswoman. As she builds her retail fashion empire, she realizes the value and the difficulty of being the boss of her own life." However, it's not just the main focus of the show that is intriguing me to watch. It's the fact that Girlboss ' Sophia will be played by Britt Robertson. Because not only is she already a total "girl boss" in every meaning of the word, but Robertson is in the perfect position to take on the task of heading up her own Netflix comedy series. Let me explain why.

If you think you've never heard of Robertson, odds are you just might not be aware of the fact that you have. Despite being a new face on the Netflix scene, Robertson's previous film credits include starring in Disney's Tomorrowland, starring in the 2015 film adaptation of Nicholas Sparks' The Longest Ride, and numerous other theatrical releases over the years including Delivery Man, Scream 4, and even the Disney Channel Original Movie Avalon High. However, when it comes to television, she's not a newbie either. As Robertson has had lengthy roles on shows such as Life Unexpected, The Secret Circle, and, most recently, CBS' Under The Dome. Basically, there's no way I would actually consider the 26-year-old actor as being new to the screen. And now it's finally her time to shine as the lead in a comedy series once again.

However, aside from Robertson's acting work, there's other factors that make her a totally perfect "girl boss," as well. And one of those things is her ability to stay out of the public eye. If you haven't heard of her it's probably because Robertson is too busy for social media. With her sights set on staying in with her friends, being on-set, and bonding with co-stars who seem to just keep getting more and more impressive (I mean, George Clooney and Hugh Laurie in one movie?!) she's got her nose on the grindstone. Just like a true heard-working "girl boss." Plus, did I mention that she's the longtime girlfriend of Maze Runner star Dylan O'Brien? Yeah, I have to give her props for that.

And, after taking all of those factors about her life and her work into consideration, that's where the character similarities truly do emerge. Because, just like Robertson's lack of being in the public eye, Sophia just doesn't care what anybody thinks — she's doing what's best for her. Both Robertson and Sophia are feisty, fearless, and truly dance to the beat of their own drums. Ultimately, it's a match made in casting heaven. And I can't wait to see how she officially pulls this off!

But what makes the upcoming comedy series even more "girl-boss"-ier? Well, the fact that the show is being helmed by some girl bosses of its own. The book's author is working behind-the-scenes on the new series along with the likes of Pitch Perfect's Kay Cannon and Snow White and the Huntsman's Charlize Theron. But, unfortunately, Netflix-watchers still have a long way to go until they can add Girlboss to their queue — the 13 episodes of the show's first season won't be available for streaming until sometime in 2017.

In the meantime, Amoruso's book Girlboss is currently on shelves. And I'm already picturing Robertson totally nailing this role.