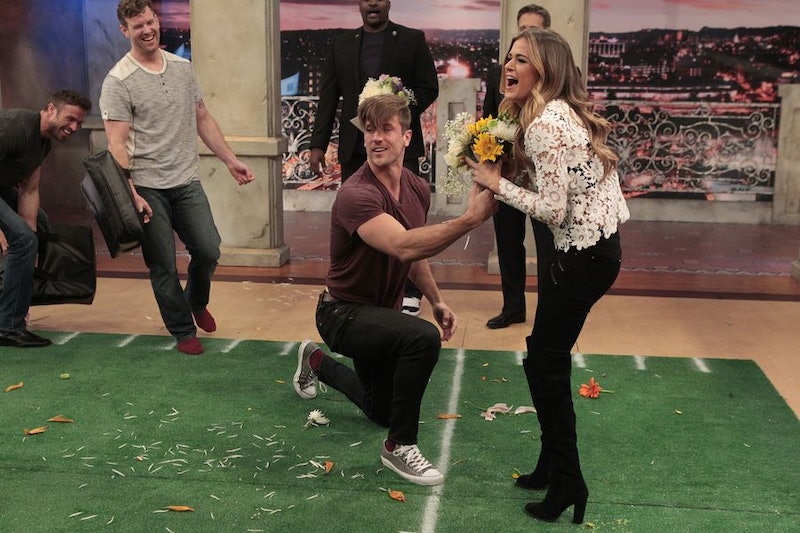 This has been a year of truly strange memes for ABC's reality dating franchise. First there was Olivia Caridi's mouth on Season 20 of The Bachelor, and now The Bachelorette has Jordan Rodger's hair, which somehow manages to defy all rules of physics and haircare. Seriously, we need to talk about this situation, especially because Jordan Rodgers' hair should be more famous than his brother — yes, I'm talking about Green Bay Packers quarterback Aaron Rodgers.

Sure, Aaron has led an impressive football career as a Super Bowl champion and MVP, and has become an indomitable force within the NFL — plus, he's no stranger to the limelight having appeared on various sports talk shows, late night shows, and even had a guest appearance on The Office . But, all that being said, we know that the MVP of this season of The Bachelorette is Jordan's unruly, untamable hair. From his fly aways in the season premiere that distracted viewers from his conversation with the bachelorette herself, JoJo, to the number of pictures Jordan has posted of his hair on social media, it has enough personality to support its own celebrity career. So, I've done everyone a favor and picked out Jordan's best hair moments from The Bachelorette and beyond. You're welcome.

Where It All Began...

The piece of hair that started it all, and distracted an entire nation from a television series about one woman trying to find love among a pack of 26 men.

OK, now we're taking a trip down memory lane, because how could we not? Jordan's long hair is impressive, too bad this is from more than two years ago.

Put A Beanie On It

Another photo from two years ago, most of his hair may be under a beanie here, but it's still worth some appreciation.

I'm not fully convinced there is an actual man bun happening here (even though Jordan's caption says there is) and it's not just some weird result of his hat messing with his hair, but it certainly looks bun-like.

The ridiculous hair situation has officially taken over Jordan's entire head in this particular photo and I have no words.

Personally, I think it's very sweet that Jordan and Aaron managed to arrange their hair so that it swoops toward each other — but Jordan definitely has the better swoop.

On Wednesdays We Wear Wigs

Sure, this may not be Jordan's real hair, but it's worth a mention. Plus, it's not too different from his hairstyle two years ago, it's just a bit more blonde.

Considering this photo was posted after Jordan's hair became a household name, I think it's safe to say Jordan knows what he's doing and is simply antagonizing those who wish his hair would just be tamed.

You Can't Stop The Hair

No matter what The Bachelorette producers do, you can't stop the motion of the ocean in Jordan's hair. So, it looks like we'll be treated to all Jordan's hair shenanigans for as long as he's on the show. We might as well learn to accept it, friends.

Now, I understand why Aaron Rodgers is famous and I can admit he's pretty good at football (listen, I'm more of a hockey girl, but I get it). Still, the conversation surrounding Jordan on The Bachelorette needs to have less to do with him being Aaron Rodgers' brother and more to do with this hair situation. It deserves its own parody Twitter account, at the very least.