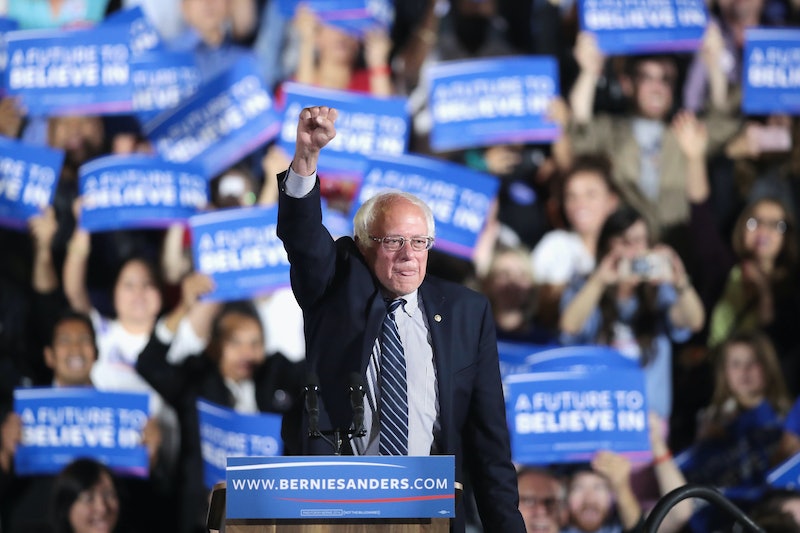 After many primaries on Tuesday had come to an end, finally around 10:45 p.m. PT, Bernie Sanders gave a speech in California, the transcript of which could move many of his supporters to action. Sanders vowed to continue fighting for the Democratic nomination all the way to the convention in Philadelphia, despite many media outlets having called the race for his opponent Hillary Clinton (who has also accepted her new presumptive nominee status).

Sanders took the stage in Los Angeles to a raucous crowd that would hardly let him speak when he arrived at the podium. Cheers lasted for minutes at a time, and Sanders gave that classic grin as he laughed at the audience's sheer enthusiasm at his presence. Though the attendees stayed positive throughout the speech, there were several boos when Sanders mentioned that he had received a call from Clinton and congratulated on her victories Tuesday night.

In her speech, Clinton praised Sanders and his campaign in a way that made it seem like she's sure it's over, but that's something Sanders, in his usual style, refuses to accept. While he's playing nice for now, he's made it very clear he's not going to concede this race until he's sure the superdelegates won't give their support to him. And that means staying in until July.

Here's the transcript of Sanders' late-night speech in full.

Thank you. Thank you, LA! Thank you all.

Let me thank all of you for being here tonight. And let me thank all of you for being part of the political revolution. I especially want to thank the tens of thousands of volunteers here in the state of California. And I want to thank the people of California for their incredible hospitality. It has been one of the most moving moments of my life to be out throughout this state in beautiful evenings and seeing thousands and thousands of people coming out. People who are prepared to stand up and fight for real change in this country.

All of you know, all of you know, that when we began this campaign a little over a year ago we were considered to be a fringe campaign. But over the last year, I think that has changed, just a little bit. By the end of tonight, we’ll have won, I believe 22 state primaries and caucuses. We will have received well over 10 million votes. And what is most extraordinary to me is that in virtually every single state, we have won in big numbers, the votes of young people. Young people understand that they are the future of America, and they intend to help shape that future. And I am enormously optimistic about the future of our country when so many young people have come on board and understand that our vision, a vision of social justice, economic justice, racial justice, and environmental justice, must be the future of America. Our vision will be the future of America.

Our campaign from Day 1 has understood some very basic points, and that is first, we will not allow right-wing Republicans to control our government. And that is especially true with Donald Trump as the Republican candidate. The American people in my view will never support a candidate whose major theme is bigotry. Who insults Mexicans, who insults Muslims and women and African Americans. We will not allow Donald Trump to become president of the United States.

But we understand that our mission is more than just defeating Trump, it is transforming our country. The vast majority of the American people know that it is not acceptable that the top tenth of 1 percent owns as much wealth as the bottom 90 percent; we’re going to change that. And when millions of Americans are working longer hours for lower wages, we will not allow 57 percent of all new income to go to the top 1 percent. And we will end a corrupt campaign finance system.

Democracy is not about billionaires buying elections. And we will end a broken criminal justice system. And we will break up the major banks on Wall Street. And we will join the rest of the industrialized world and guarantee health care to all people as a right. And we will bring about real immigration reform and a path toward citizenship. And we will tell the billionaire class and corporate America that they will start paying their fair share of taxes. And what we understand, and what every one of us has always understood, is that real change never occurs from the top on down, always from the bottom on up.

But you all know it is more than Bernie. It is all of us together. It is what this movement is about. Is millions of people from coast to coast standing up and looking around them and knowing that we can do much, much better as a nation. That whether Wall Street likes it, whether corporate America likes it, whether wealthy campaign contributors like it, whether the corporate media likes it, we, together, together we know what our job is. And that is to bring the American people together to create a government that works for us, not the 1 percent.

I am pretty good at arithmetic, and I know that the fight in front of us is a very, very steep fight, but we will continue to fight for every vote and every delegate we can get. Tonight I had a very kind call from President Obama and I look forward to working with him to ensure that we move this country forward. And tonight, I had a very gracious call from Secretary Clinton and congratulated her on her victories tonight. Our fight is to transform our country and to understand that we are in this together. To understand that all of what we believe is what the majority of the American people believe. And to understand that the struggle continues.

I want to thank the people of North Dakota. It appears that we will likely win Montana as well. I don’t think anybody knows where we’ll end up in California, but I suspect the gap will significantly diminish. And if this campaign has proven anything, it has proven that millions of Americans who love this country are prepared to stand up and fight to make this country a much better place.

Thank you all, the struggle continues.