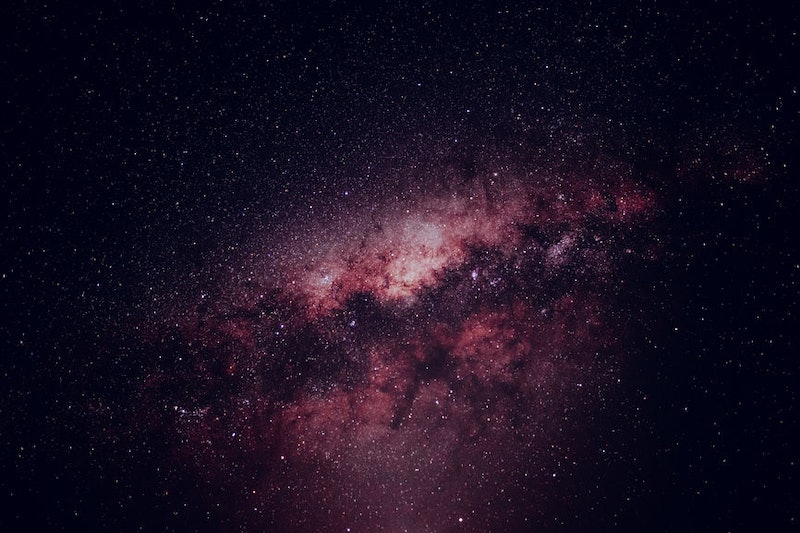 Rainbow food has been all the rage lately, and I was OK with it... until the rainbow mac and cheese. I draw the line at mac and cheese. But it looks like these colorful creations have some new competition, because "galaxy food" is the latest food trend — and the Internet is predictably all over it. Galaxy food — or more specifically, galaxy desserts — is exactly what it sounds like: Sweet treats that capture all the majesty of space. Think frosting that resembles a starry night sky. It's the kind of food that is so gorgeous, you almost don't want to eat it. Almost. But you do anyway, right after posting 425 pictures of it on Instagram.

Food establishments have caught on and are starting to offer all sorts of galactic treats, and the photos are mesmerizing. Has food ever been this pretty? Not mine. Half of what I cook ends up on the floor or down my blouse. And while this trend, like most, while ultimately be replaced by something newer and hipper later on (I can't even imagine what, at this point), for now, I'm going to drool over these photo-worthy images of awe-inspiring galaxy desserts. They're all over Instagram, and Twitter, and, well, just about every kind of social media you can imagine. I mean... look at these. How is this even real?

I feel like I'm on a rocket ship exploring outer space. I feel like I'm soaring through the galaxy. I feel like I'm zipping into another dimension. But really... I'm still sitting here drooling and breathing heavily while looking at these pictures. My eggwhites just don't suffice now.

If this trend is anything like the rainbow food hoopla, be prepared for galaxy-themed everything. It's dreamy... but they better not touch macaroni and cheese. Just saying.