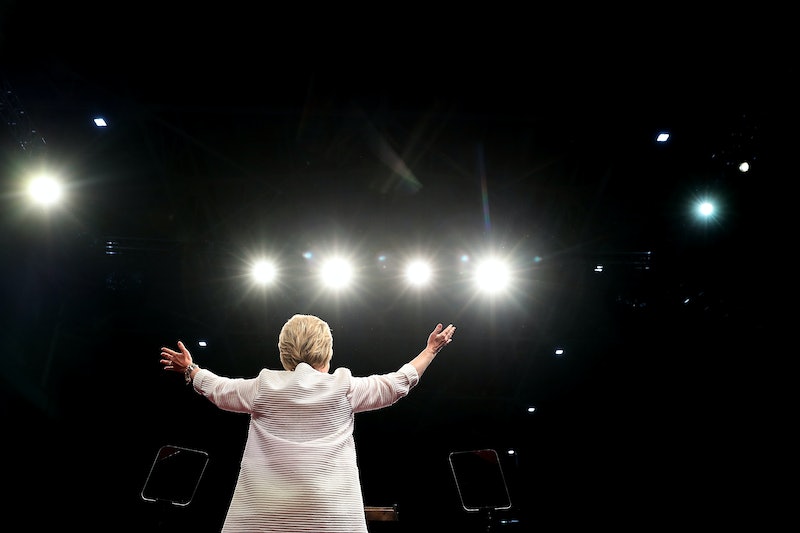 "Privileged." "Childish." "Stupid." "Human tire fire." These are just a few of the fun labels being assigned — by supporters of Sen. Bernie Sanders and of Hillary Clinton alike — to Sanders supporters who won't back Clinton in November. Most Sanders fans will probably do so in the end (with no shortage of ambivalence, as evidenced by Wednesday's trending hashtag #GirlIGuessImWithHer), but those of us not prepared to fall in line have our reasons. Calling us names dismisses this, and it certainly doesn't address those reasons.

The prevailing argument for voting for Clinton in the general election is not that her policies are good; it is, plain and simply, that Donald Trump would be a worse president. We have to vote for Clinton, whether we like her policies or not, the argument goes, because she'll at least be better than Trump. Sanders himself has advanced this argument time and again. And I'll admit right off the bat that this "President Trump versus President Clinton" comparison is one to which I have no access.

Every time I have tried to imagine concretely what would happen during a Trump presidency — concerning any policy matter whatsoever — I literally get a mental image of a giant question mark. And yes, that definitely scares me.

But what those who perpetuate the Trump-fear argument fail to take into account is that, for many of us who won't back Clinton in November, we're afraid of what her presidency will look like. I do believe Clinton would work to support women's rights in the United States — her track record there is solid — but I don't know that she would meaningfully work for the needs of people in poverty, people of color, or LGBT individuals. And I have reason to fear her foreign policy decisions, since, as a senator and as secretary of state, she supported the use of military force in Libya, Syria, Iraq, and Afghanistan.

I care deeply about abortion access and pay equity, but I don't think I can, for their sake, cast my vote for a president whom I fear would contribute to the death toll of people abroad and the continued destabilization and destruction of their homelands.

But the fear that will likely prevent me from voting for Clinton extends beyond the candidate herself. I am afraid of what the world will look like five, 10, 50 years down the line if progressives continue to capitulate to the pressures of the two-party system. Unless we demand more progressive representation by refusing to play the "lesser of two evils" game, I am very afraid that the next generation will grow up with almost exactly the same problems we have today — racial injustice, widespread poverty, legalized discrimination against gay and transgender individuals, and perpetual violence abroad.

In my view, voting for Clinton is the same as saying, "Carry on as you were. We'll fall in line no matter what."

I understand that Clinton has spoken in favor of many progressive causes on the campaign trail. But I don't think she would have done so — or at least, not to the extent that she has — if not for the pressure placed on her campaign by Sanders' more progressive opposition. This does not instill confidence in me.

Of course, it's all speculation on both sides of the argument, however informed it may be — what would and wouldn't happen during a Trump presidency, what would and wouldn't happen during a Clinton presidency. I totally understand that there are a lot of people who disagree with me, people who have more faith in establishment candidates than I do, who aren't as afraid of Clinton's foreign policy as they are of Trump's unpredictability, and who believe that Clinton will really push for progressive measures. I respect that. But I don't think my more cynical take on these matters makes me nothing more than a human tire fire.