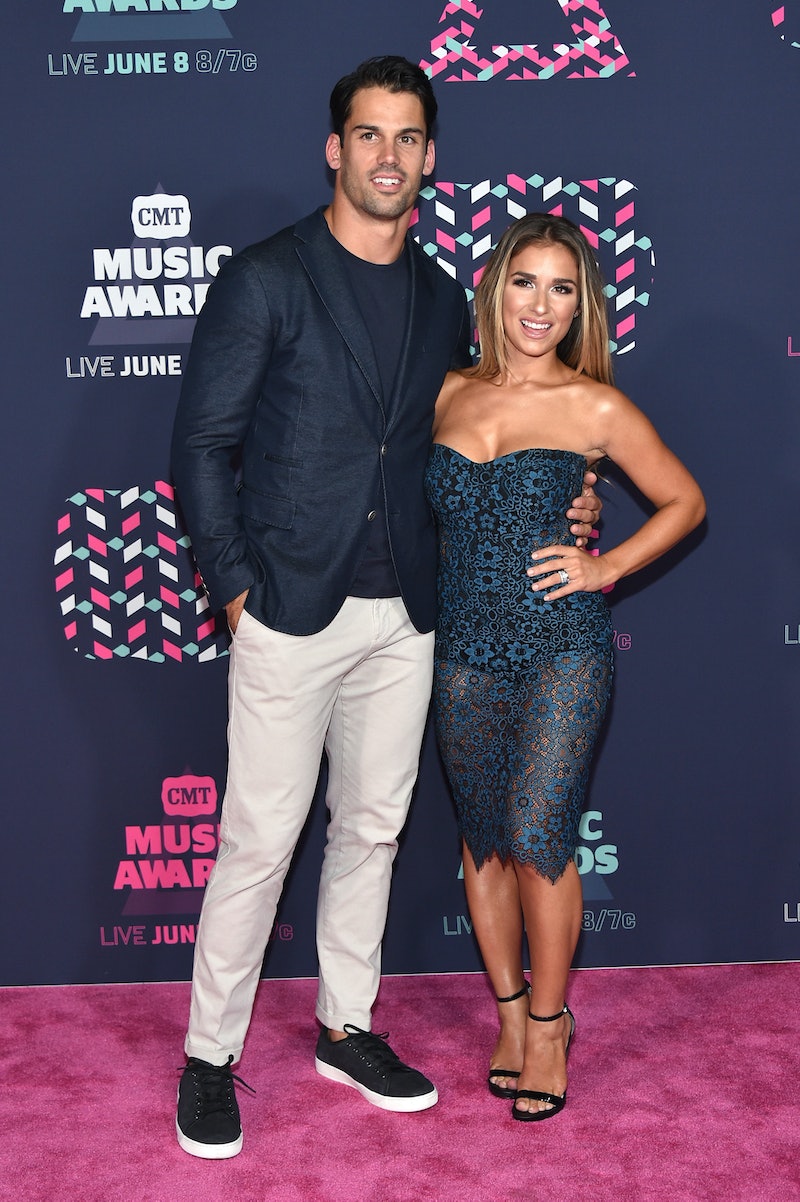 Bella Hadid and the Weeknd, Emily Blunt and John Krasinski, Kanye & Kim — these are just a few of of the Hollywood couples that are totally #couplegoals. Tonight, two more stars are illustrating just how great they are together. Eric Decker & Jessie James Decker's CMT awards red carpet looks totally slayed and coordinated perfectly. Basically, they had a total modern Britney and Justin moment circa 2001 American Music Awards.

Wednesday night's Country Music Television awards featured tons of country stars and celebrities looking fab on the red carpet, but of course, Jessie James Decker stole the show as usual. The pair walked the pink carpet rocking navy hues and looking bronzed and summery like the country music star and athlete version of a Greek god and goddess.

James Decker's dress was perfect for the carpet of a music awards show. Sheer, navy lace laid over a solid, strapless bodysuit for a figure flaunting look that was very her. While at first glance the ensemble appeared to be a simple, solid lace strapless cocktail dress, leave it to James Decker to spice things up a bit.

Meanwhile, husband Eric Decker looked handsome as ever in his deep blue sport coat with a simple blue tee underneath. Like many network award shows, the CMT awards lend themselves to a more casual vibe, and Decker's sneakers were the perfect choice for the occasion.

While the pair look totally original tonight, it's hard not to draw comparison to another couple famous for wearing coordinating blue outfits...

From James Decker's frock being strapless to the navy coat that Decker is wearing, it's definitely a more modern take on the look.

Regardless of the couple's inspiration, they look great. Leave it to Eric Decker and Jesse James Decker's CMT Award red carpet outfits to totally steal the show from anyone else walking the pink runway. If they weren't already #couplegoals, they are now.