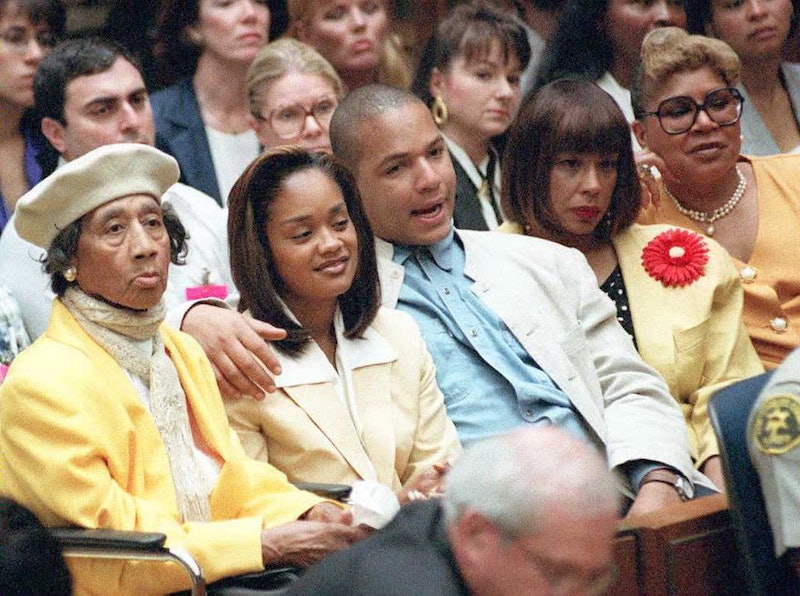 The year 2016 has brought O.J. Simpson back into the spotlight in a major way — first, Ryan Murphy's The People v. O.J. Simpson: American Crime Story delved into the courtroom drama and the media circus that surrounded the trial of the century. Now, the ESPN series O.J.: Made In America will focus on the broader topic of Simpson's rise to fame and what the athlete's life has been like since he was famously acquitted of the murders of his ex-wife Nicole Brown Simpson and Ron Goldman. Prior to marrying Brown Simpson, the football star was married to Marguerite L. Whitley and they had three children together. So, where are O.J. Simpson's oldest children today?

UPDATE: On Thursday, July 20, 2017, O.J. Simpson was seen before a Nevada parole board to discuss a potential release from prison. At his parole hearing was his daughter Arnelle, who has long been one of Simpson's most ardent supporters. She spoke on the stand arguing for her father's release. If Simpson gets parole, he will have served nine years of his 33-year sentence.

EARLIER: In August 1979, The St. Petersburg Times reported that the couple's youngest daughter, Aaren, had died after a drowning accident. She was 23 months old at the time. As for his oldest daughter Arnelle and son Jason, both have understandably made an effort to stay out of the spotlight and details about their lives are sparse. In 2014, Georgia Newsday picked up an article originally published by The Daily Mail. It cited Arnelle as noting that it was extremely difficult for all the Simpson children to "maintain any sort of stability or job."

Bustle reached to Justin for comment on what he and Sydney are doing today and has not received a response. Jason and Arnelle could not be reached for comment.

The Daily Mail reporter, who interviewed Arnelle over a period of four days in 2014, wrote that she had worked for a rapper and produced several fashion shows in the past, but was looking for a new job and new home at the time of publication. The article also indicated that she was defensive of her father and proud of her half-siblings, Sydney and Justin.

Although all of Simpson's children have kept a low profile, details about Jason's life are nearly impossible to come by. Private investigator William C. Dear published a book called O.J. Simpson Is Innocent And I Can Prove It and in it, as reported by Business Insider, Dear theorized that Jason (who was 24 at the time) killed Brown Simpson and Goldman and his father came to the crime scene to help him cover it up. Dear's claims were widely discredited by multiple outlets including The Village Voice and The Telegraph, but having such a serious rumor out there could certainly explain why Jason prefers to avoid public scrutiny at all costs. And according to The Village Voice's article about Dear's claims, Jason testified in a civil deposition that "he was never interviewed by either the LAPD or the D.A.'s office in the wake of the killings," while statements from police and prosecutors "suggest that Jason was never considered a suspect."

An upcoming documentary will focus on this theory — and Marcia Clark, the lead prosecutor in the Simpson trial, described the claims as "offensive" in an interview with TODAY . She told Savannah Guthrie: "It is nonsense, because there is no real logic, there's no evidence, there's nothing to back it up, nothing."

The Simpson case continues to fascinate the public, but it's important to remember that it's a painful reality that all of his children must live with every day.