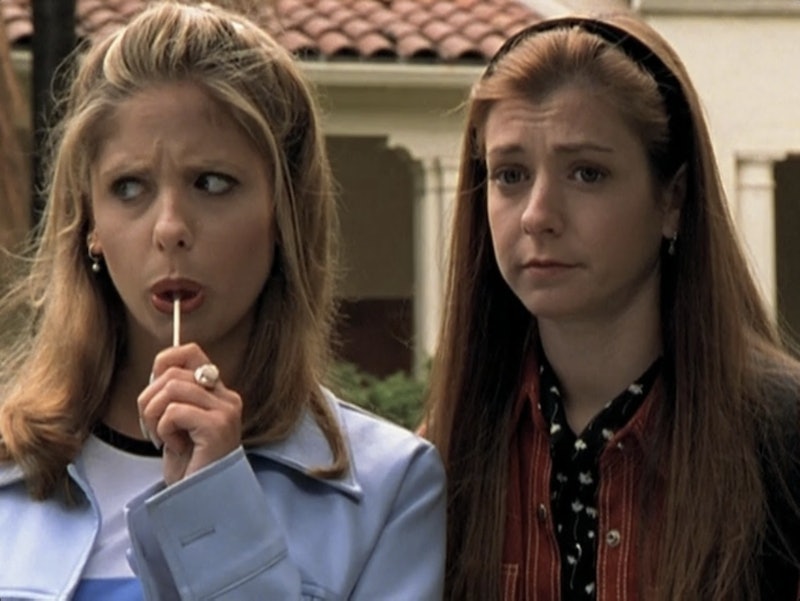 The media has always given us stereotypes for women. What's new there? In the '90s female stereotypes were just as prevalent as they are now, and from the TV and movies we consumed we got a spread of characters we could choose to be like. A lot of those characters, of course, were multi-dimensional. Just like real women! But they all had at least one quality that defined them above all others. Like the women in Sex & the City: we broke women down into categories. In the '90s and early '00s you were either a Carrie, a Miranda, a Samantha, or a Charlotte. And it was very important to chose just one to be.

If you were a preteen or teenager in the '90s, there was probably one woman you idolized, one type you wanted to be above all others. It's not exactly feminism at its finest, but not all the stereotypes were horrible, either. Some of them were pretty badass. Women in the '90s weren't all walking around "Whatever"-ing everything. Some were killing vampires, and others were writing kind of average poetry but expressing their vulnerabilities nonetheless. Here are 12 of the most prominent female stereotypes from the '90s.

She was the feminist one. The girl in the flannels who wouldn't be quiet. She was Gwen Stefani singing "Just A Girl". She was Lindsay Weir in Freaks & Geeks. She was Lisa Loeb and Shirley Manson. She made up her own rules and probably also wore some army fatigues from time to time.

Sure, we had MPDGs in the cultural cannon until very recently, but they were BIG in the '90s. Like Wynona Ryder and Drew Barrymore big.

Courtney Love is the ultimate '90s grunge chick. Grunge chicks in the '90s had dirty hair, smudged makeup, and loved boys who looked like Kurt Cobain. They were the '90s rock chick and they were pretty defiant, rebellious, and shockingly cool.

Cordelia Chase, Cher, and Dionne: the '90s rich brat was a Valley girl stereotype turned up to one million. She did have the best wardrobe, though.

The mall was REAL in the '90s. It was the epicenter of life. Sure, you'd get your rich brats shopping at the mall, but the girls who hung out at the mall like it was their own living room were the coolest ones. They had cell phones before everyone else, and could always be found hanging in the food court, gossiping and wearing a lot of floral.

5. The Misunderstood Angsty One

We all secretly wanted to be full time angsty. Like Cat in 10 Things I Hate About You, or Fiona Apple. Everyone had at least a little bit of '90s angst, but there was a definite Daria stereotype that turned angst into a whole persona.

A little secret about me: I used to hope that vampires were real because I actually truly believed I was the chosen one, The Slayer. Not a joke. Until I was about 16. Anyway, kick ass women like Buffy were the ultimate dream in the '90s.

From Cruel Intentions to Samantha Jones there was a sex fiend female stereotype in the '90s that was intriguing to us as pre-teens and teens. Now, sexuality is a part of the persona of all different types of women, but in the '90s there was some for whom it was their entire persona.

8. The Angry And Broken Hearted

Alanis Morissette had it covered for the angry women who'd been wronged. In the '90s, she was the guardian angel/patron saint for the angry and broken hearted. Right next to Lisa Loeb and Natalie Imbruglia.

9. The Girl Next Door

She was Joey Potter, and later, in the '00s, Marisa Cooper. The girl next door was a steady stereotype in pop culture. She was inconspicuously beautiful, smart but vulnerable, kind but occasionally sassy, pretty regular but also kind of extraordinary. A real male fantasy: not too much of anything, except for magical.

10. The All American Sweetheart

Even if you weren't American, the American Sweetheart stereotype was one you knew well. An early Britney, Mandy Moore and Jessica Simpson were America's actual sweethearts, representing chastity plus fetishized sexuality, polite chat, and big white toothy grins.

There were some good female stereotypes in the '90s. Like the "smart" girls. Obviously it would have been nice to see women with lots of different traits and smart being one of them, but between Willow Rosenberg and April O'Neil, we had some pretty solid smart role models to look up to in pop culture.

The worst female stereotype of the '90s? The Cinderella. The nerd who got made over to be beautiful, only to have the handsome dude fall in love with her. Good riddance to the resurgence of Cinderellas in '90s pop culture!

More like this
18 Personality Traits Of A Cheater, According To Experts
By Carina Wolff and Lexi Inks
20 Smart Devices Under $35 That’ll Change The Entire Vibe Of Your Home
By Emma Carey
Here’s Your Daily Horoscope For September 26, 2022
By Mecca Woods
8 Completely Unserious Tips To Make Your Cuffing Season A Success
By Ginny Hogan
Get Even More From Bustle — Sign Up For The Newsletter