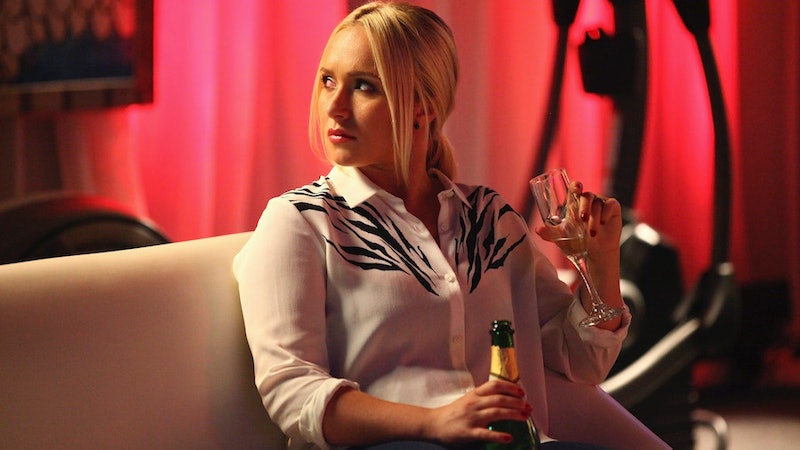 Hey, you there. Yeah, you. I know you've been curled up weeping in the corner ever since your favorite show was cancelled, but stand up and wipe your eyes. Nashville has been renewed for a fifth season, due to the fact that it's been picked up by CMT. When the series was dropped by ABC after four seasons due to sagging ratings, though the move made perfect sense for the network, it felt like a direct affront to me, country music, and Connie Britton's hair. I worried that I might never love or trust again without a great show like Nashville on the air. But just as I was losing hope in television programming, a knight in shining armor swept in to save the day, in the form of Country Music Television. In a move that makes so much sense that I'm surprised I didn't spearhead it myself — I mean country music, hello — CMT scooped the show up and renewed it for Season 5.

They'll also be streaming the show on Hulu, which is what we've had our fingers crossed for ever since the hammer dropped. What a relief to live and love in 2016, right? When we don't have to give up hope until the streaming platforms sing. (I feel like we should start saying that instead of "fat lady"; it's much more topical and accurate in this day and age.) The deal was apparently in the works for weeks, with negotiations finally coming to a close on Jun. 9., culminating in a deal that will see the state of Tennessee, Metro, and Nashville Convention and Visitors Corporation contributing what could end up being millions of dollars to offset the show's production costs.

Tennessee itself has a reported $8 million set aside in its budget to motivate filming in the state, and I can't imagine a better fit to take advantage of such an incentive than a show like Nashville. After all, not only is the show based around country music, which is right there in the name of their new network, but CMT is actually based in Nashville itself. It's such an eerily perfect fit that I can't believe we weren't doing things this way all along. But no matter how it happened or what road we took to get there, I'm just delighted that we get another season of the hit show. Here's to the next one and — hopefully — many more.

More like this
15 Piping Hot Behind-The-Scenes Secrets From 'Great British Bake Off'
By Emily Dixon and Darshita Goyal
What’s New On Netflix: Ana De Armas’ 'Blonde' & A Nick Kroll Special
By Arya Roshanian
Here's The Full List Of Zach's Confirmed & Potential 'Bachelor' Contestants
By Kadin Burnett and Grace Wehniainen
Filming For 'Bling Empire' Season 3 Picked Up Right After Season 2’s Drama
By Gretchen Smail
Get Even More From Bustle — Sign Up For The Newsletter