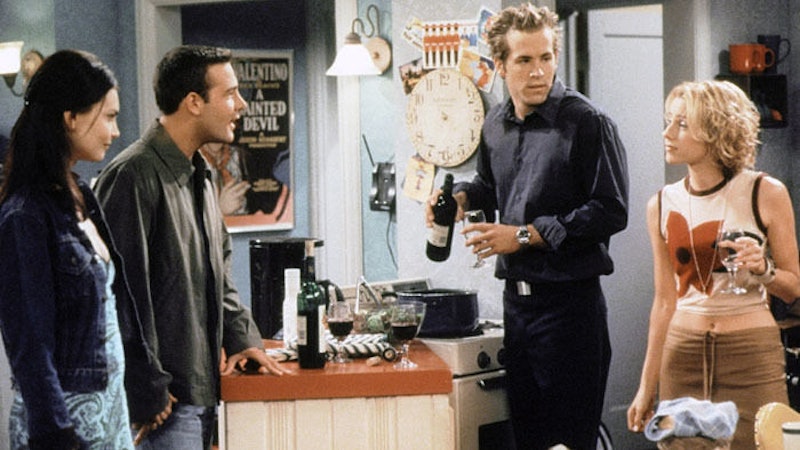 Let's get real about something here, the '90s were a golden age of television. Maybe not in terms of overall quality, and maybe not even in terms of the overall choice on offer. But the distinct lack of options presented by having to watch whatever your friends and family had on the TV or the constraints of a rigorous schedule (Netflix has liberated all of us, guys) presented us with a set of shows which we may not have personally chosen to have watched ourselves. Though teen shows and Nickelodeon classics have secured a place in our hearts for life, there are a bunch of '90s sitcom comedies that you've probably forgotten about, and really, who can blame you?

In the '90s, sitcoms were the easy going television option, perfect for bringing the chuckles, uniting friendship groups, and giving entire families something to bond over of an evening. They also didn't require too much of your attention, making them perfect to play in the background so that you could still giggle at punchlines while flicking through magazines, eating junk food, or gossiping about you know who. Is it any wonder that we've managed to forget about so many of these shows when we took them so much for granted? I think it might be time to re-watch all of these, immediately.

If the catchphrases, "I'm the baby, gotta love me!" and "Not the momma!" haven't been deeply ingrained into your psyche, then I feel sad for you, son. Who knew that a sitcom about a bunch of puppet dinosaurs could be so spectacular?

Hands up if you had a big ole crush on Teen Angel? I mean, that halo, sports jacket and feather wings combo? Be still my beating heart; the boy was an angelic babe. He was also hilarious.

With its quirky cast and unconventional set of comedic intros (there was a new one performed for each episode), the Ellen Degeneres sitcom featured a lot of raised eyebrows and suggestive jokes leading up to the comedian's eventual coming out on the show in 1997.

There's still a sub-section of society who don't believe that Smart Guy was ever a genuine, real show but it most definitely was. Starring a young genius who gets up to all kinds of clever (and sometimes stupid) shenanigans, Smart Guy was also notable for an episode where the child prodigy applies his supreme intelligence to audition as a backing dancer for Destiny's Child (it's the best episode of anything ever).

How could anyone ever forget about a sitcom that had the almighty En Vogue singing its theme tune? Hangin' With Mr Cooper was one of the few shows which somehow managed to unite the entire family in chuckles when I was a kid, too.

The Lawrence brothers ranged from adorable to cute to whoa, and Brotherly Love united their talents in a big, wholesome, lovely family affair of a sitcom which managed to deliver a wide appeal.

The TV show of the classic comedy was easy watching, but it was never as genius as the source material, so there's probably a good reason why you may have forgotten it. That theme tune, though? Totally buggin'. In a good way.

8. Two Guys, A Girl And A Pizza Place

Starring Nathan Fillon and Ryan Reynolds (in classic Reynolds mode, too), this show was the pinnacle of Saturday afternoon viewing with your best friends.

Another amazing '90s theme tune, Hang Time combined everything that a '90s kid craved from television: high school drama, comedy, and a cast full of potential crushes who you adorned the walls of your bedroom with.

Combining cheap science fiction with ludicrously silly comedy, this British cult classic would go on to have a (regrettable and immediately cancelled) American version which the World didn't really ever need.

None of us ever forgot that Mayim Bialik is a total Queen but it's always staggering just how many people have forgotten about this show. Joey Lawrence in a leather biker jacket, anyone? How could you ever forget that?

This Michael J. Fox sitcom focused on the comedic plights of a local New York government and was notable for it's refreshing portrayal of an openly homosexual character who was well adjusted, happy, and in no way conflicted over his identity (he did own a suicidal dog named Rags, however).

Alf was some kind of an alien pet type creature who ate cats and lived in a household full of humans. If you can't remember the comedy appeal of that particularly genius set up then I demand you go back and re-watch some immediately.

Though it was hardly ground breaking (a newsroom comedy? Whatever next!), it did have the exceptional talents of Maura Tierny, Vicki Lewis, Andy Dick, and Phil Hartman who made the show more than worthy of remembering.

Yet another aliens living amongst humans comedy and featuring the added bonus of a young Joseph Gordon Levitt, 3rd Rock From The Sun had an insanely funny cast and razor sharp observations about American society to boot.

Paul Reiser and Helen Hunt played a happily married couple in this sitcom which proved that TV shows could still focus on marriage without requiring the addition of children. It was my mom's favorite, and it was probably yours too (secretly, I also loved the hell out of it also).

I think the evidence above clearly exemplifies another blatant truth; the '90s were a golden age of television, but, more importantly, they were also a golden age for theme tunes. Hot damn, get that Hangin' With Mr Cooper theme on a mix tape, like, right now.