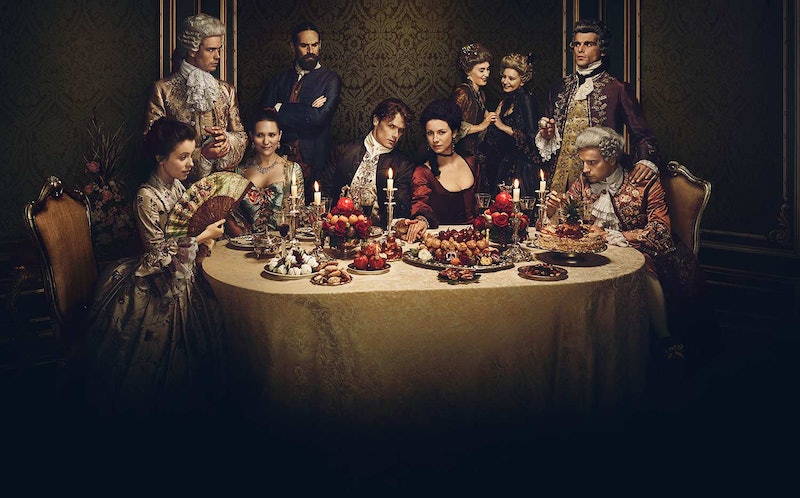 Last week, the glorious news was revealed that Outlander was picked up for a third and fourth season before the second has even finished. Naturally, fans want to know: How the hell will Claire’s story continue to unravel and when will we be able to watch? Well, we don’t have an answer to the latter. Starz has yet to announce when Season 3 will premiere — but they are amidst a season that’s still airing now, so I’ll cut ‘em some slack. Luckily, though, I was able to catch the show’s executive producer, Ronald D. Moore, just days after the news broke, who was able to give me a little bit of insight in terms of what he and the gang have up their sleeves. Guess one could say I tried to pull a Claire and mess with time.

So far we know that Season 3 will be based on the third of eight books in Diana Gabaldon’s Outlander series called Voyager, and 4 will based on the fourth book, Drums of Autumn. Keep in mind, though, Moore and his team basically found out the show was renewed when the rest of the world did. “[I] was very excited, we’ve been talking about it for a while and it’s just great, it’s a big bode of confidence,” he says. “Typically shows get picked up a season at a time and usually long after you’re done wrapping production, they wait to see how all the numbers look from the season. Getting two years simultaneously is huge. Wow, they really believe in the show very strongly.”

The fans were the ones to make this happen, by the way. Also actors Caitriona Balfe and Sam Heughan's on-screen perfection, but the fans, too. “Primarily, it’s a business decision. Looking at ratings, numbers and subscriber base and deciding: Will this benefit us? If so, how can we continue? I think they believed in the show creatively—this can keep going, the fans believe in it, the audience is accepting it,” the producer explains. Yes, Claire, Jamie and their twisted, romantic, brilliant love story are here to stay. But will fans of the book series continue to be delightfully surprised at how close its on-air adaptation has been to the original thus far? According to Moore, they’ll be pretty pumped by the familiar similarities, yet a bit surprised at the unexpected.

“Our goal is still to try and be as faithful as we can to the books. [That’s] the way we started the project,” he explains. Still, there may be added elements, such as Claire’s PTSD in Season 2, which will keep fans on their toes. “I think the longer that you go, the more the TV series inevitably veers from the book and certain plot lines then take on a life of their own. Certain characters change and you have to follow the way they change,” Moore says. “Rupert and Angus weren’t even really in the book as a duo, that’s part of our storyline. That’s always gonna be different than it was in the book. Our version of Frank is different than he was in the book. Those changes add up and the further in you go, the bigger those separations become.”

Brace yourselves, fans. According to Moore, there’s already a new plot that’ll be presented before Season 2 even ends. “Definitely in the finale, there’s a storyline that was not in the book, but it’s around one of the characters that’s in the book,” he reveals. “We expanded on that and broidered on that because it just seemed like it was a great opportunity, it was a lot of fun.”

Safe to say fans will not be disappointed. When asked to describe Seasons 3 and 4 in one word, Moore responds: “Epic. It’ll just get bigger and bigger.”

We ain’t seen nothin’ yet.